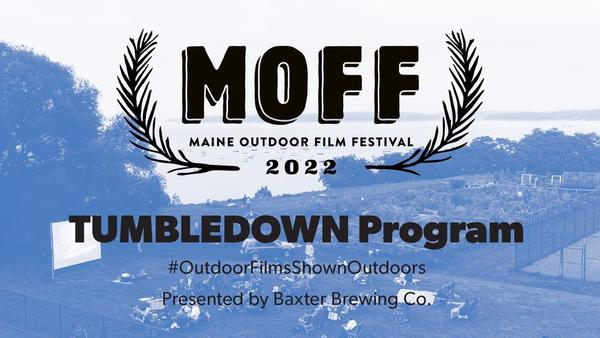 Join The Maine Outdoor Film Festival, presented by Baxter Brewing, for a two hour program of outdoor adventure and conservation short films, shown outdoors, at the Eastern Promenade for night two of the second weekend of MOFF.

THE LAST LAST HIKE - 19.9 minutes - by Céline François - from Washington - Short synopsis: 83-year-old Nimblewill Nomad is about to become the oldest person to thru-hike the Appalachian Trail. But he didn’t start at Springer Mountain, Georgia - his trek began on Flagg Mountain in Alabama, the true southern terminus of the Appalachian Mountain Range. Throughout his odyssey, he’s meeting hikers along the way and sharing the magic of Flagg Mountain, where he has been the caretaker for the past three years. With more than two decades and 50,000 miles of hiking experience behind him, will this really be his last last hike?

TO THE BONE - 5.6 minutes - by Andy Sarjahani - from Arkansas - Short synopsis: An Ozarks naturalist and bowhunter reflects on a recent animal harvest as he ponders the Cycle of Life.

JÖTUNN - 22.78 minutes - by Mikel Sarasola - from Spain - Short synopsis: Iceland, the land of fire and ice, is one of the places with the highest concentration of waterfalls in the world, which makes it one of the most popular places for extreme kayaking. Even so, given the difficulty, the inaccessibility of its rivers and the harsh climate of the place, it is not a territory that is visited so much, and there is still a lot of territory left to explore doing this sport. Three friends aim to enter new valleys to explore rivers and waterfalls that have never been descended before, and not knowing what one might find always brings surprises and not always the ones you expect.

SKI TOGETHER - 8.85 minutes - by Greg O'Connor - from Maine - Short synopsis: Zach McCarthy moved back to Maine from Boston and has found purpose in sharing his love of ski touring with others.

FOR THE LOVE OF AFGHANISTAN - 6.26 minutes - by Asher Brown, Farid Noori - from Utah - Short synopsis: Peace and freedom have never felt more real, and Farid Noori is not keeping it to himself. Through the bicycle, Farid tasted freedom for the first time. He now fundamentally believes that this simple, noble act of pedaling may be the very thing to liberate his brothers and sisters and rewrite the story of Afghanistan, a place he still calls home.

SPIRIT OF THE PEAKS - 41.25 minutes - by Connor Ryan, Tim Kressin - from United States - Short synopsis: Produced in partnership with REI Co-op Studios, Wondercamp and NativesOutdoors, and co-directed by Hunkpapa Lakota skier Connor Ryan, “Spirit of the Peaks” is a film about the struggle for balance between two worlds. For Connor, skiing in Ute Territory has always raised questions about being in reciprocity with the land and its people. As a skier who connects with the land through sport, he empathizes with the injustices that have displaced the Utes and ongoing colonization, erasure and extraction impacting the Ute people. This story connects conflicted pasts to an awakening in cultural awareness that can create an equitable future for Indigenous people and skiers. Connor's mission with the film is to do his part in restoring balance with all inhabitants of these mountains by illuminating the Utes' culture and traditional knowledge that can benefit everyone in the fight to preserve the land and dissipating snowpack.