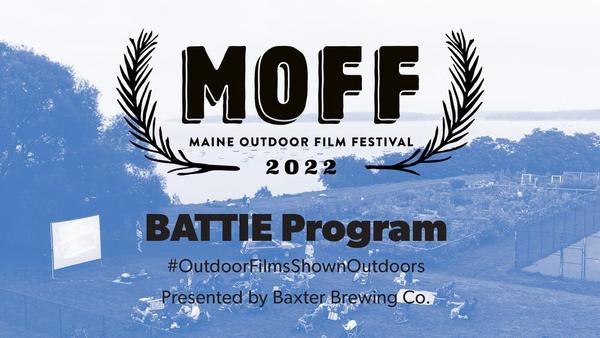 Join The Maine Outdoor Film Festival, presented by Baxter Brewing, for a two hour program of outdoor adventure and conservation short films, shown outdoors, at the Eastern Promenade for night four of the second weekend of MOFF.

DAY TRIPPER - 5.9 minutes - by Connor Davis - from Maine - Short synopsis: Day Tripper is a New England ski adventure with three simple goals: 1) Ski as much as possible 2) See as much as possible 3) Get home before bedtime. We’re happy to have you along for the ride.

TIERRA DEL FUEGO - 6.5 minutes - by Oleksandr Lozytskyi - from Ukraine - Short synopsis: Film from an exciting expedition to Tierra del Fuego in Chile and Argentina in November 2021.

ATTACK & RELEASE - 15 minutes - by Tom Attwater - from Montana - Short synopsis: After Ranga Perera's family moved to the U.S. from Sri Lanka, he tragically lost his father to an unexpected heart attack. While coping with the loss of his father, he found himself in Montana where he was drawn to the magic of fly fishing and the solace of the river. Throughout his journey, he struggles to rediscover his childlike wonder and finds comfort in his time spent on the water. After a confrontation with his own mortality, Ranga learns the importance of mindfulness and living life with an open heart.

THE LONG TRAVERSE - 21.25 minutes - by Keenan Desplanques, Christopher Blevins - from California - Short synopsis: The Long Traverse chronicles World Champion mountain biker, Christopher Blevins, as he introduces a new FKT (Fastest Known Time) route in the Los Padres National Forest. Through this effort, the film showcases his changing relationship to the land and highlights the environmental and social issues facing the area, including the increasing severity of forest fires, and the harm created by extractive industry. The film seeks to inspire viewers to think more deeply about their relationship to the places they recreate.

A NEW PERSPECTIVE OF WHITEWATER - 3.45 minutes - by Benjamin Koehler - from Maine - Short synopsis: Whitewater snorkeling and scuba diving gives a unique perspective of the river, one where you can be inside of a wave, see the current react to the riverbed, and use the rocks to climb upstream.

MORNING ZOOM - 5.2 minutes - by Jesse LaFountaine, Mercedes Mehling - from Maine - Short synopsis: It's Monday morning. Tom is getting ready for his Zoom meeting at 8am. A text from a coworker buzzes on his phone - "Boss just called. The meeting got pushed back until 9." Tom has an extra hour. And he knows exactly what to do with it.

ABOVE THE LAW - 14 minutes - by Bryony Dunne - from Ireland - Short synopsis: Above the Law links the routes of migratory birds with the journeys of people who traverse the same bodies of land and water. Unfolding atop a pigeon coop in Cairo, across bird watching towers on a Greek island as well as the border in Northern Ireland, these parallel journeys depict the laws of nature vis-à-vis the rule of man, reminding us that geopolitical are irrelevant to some species. The film features a literal bird’s-eye view as eagles, carry cameras on their backs, becoming instruments of surveillance, capturing nature, both human and nonhuman.

NORMAL PEOPLE WOULD DRIVE - 22.7 minutes - by Olivia Holt, Patrick Wood - from Australia - Short synopsis: A team of middle-aged women, who have never considered themselves athletes, head to the remote Australian outback to test their physical and mental limits in a desert ultramarathon.