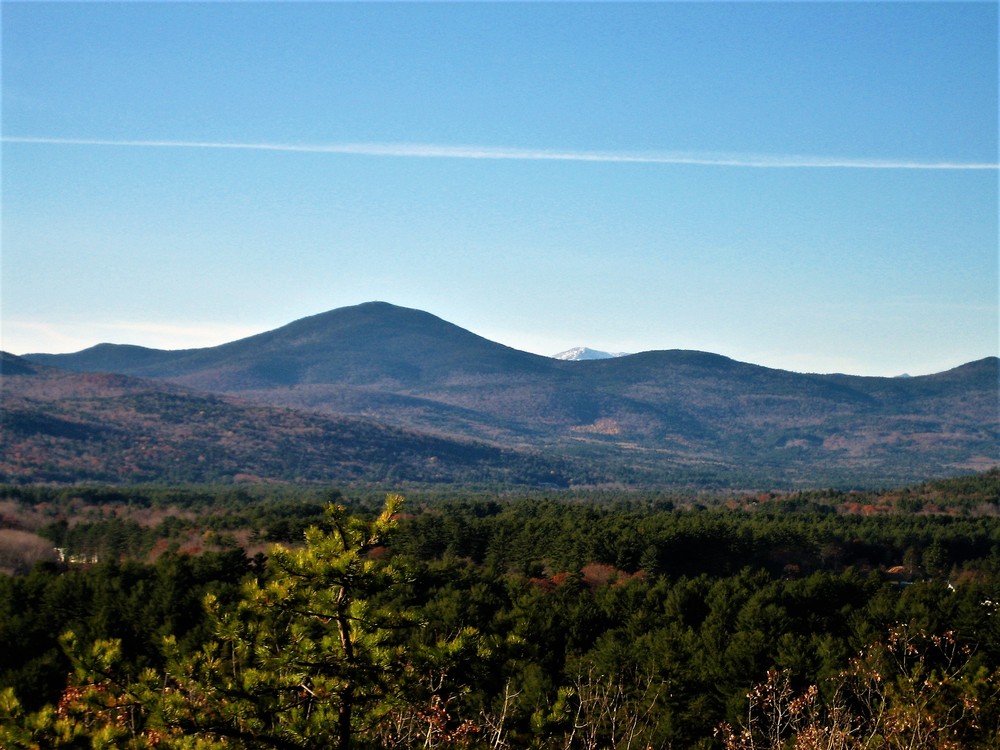 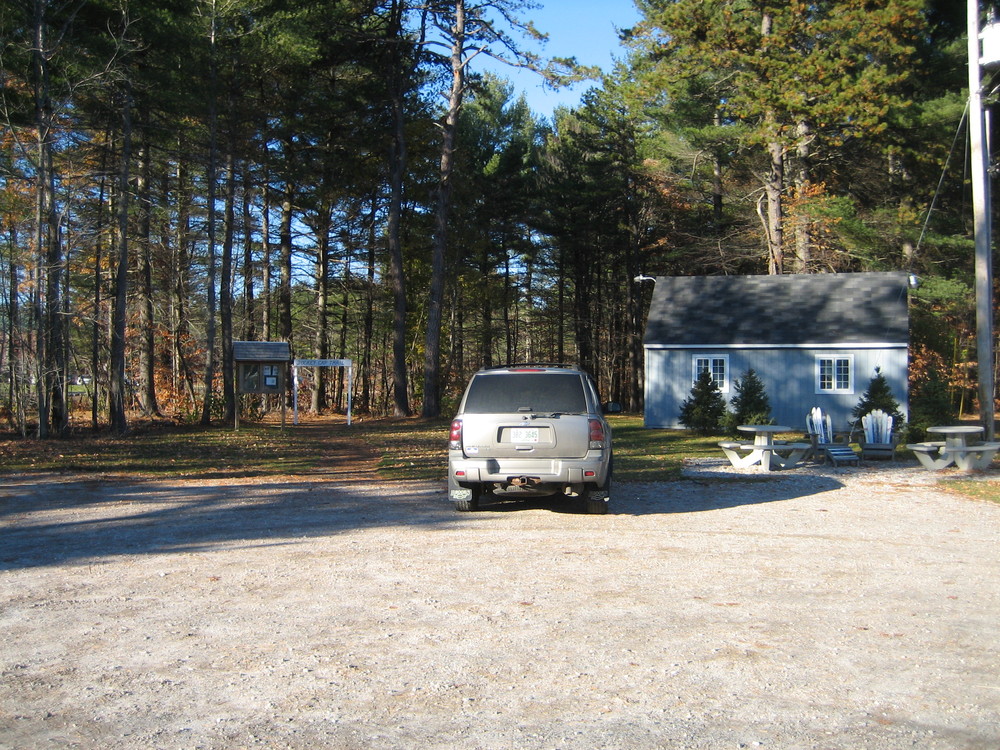 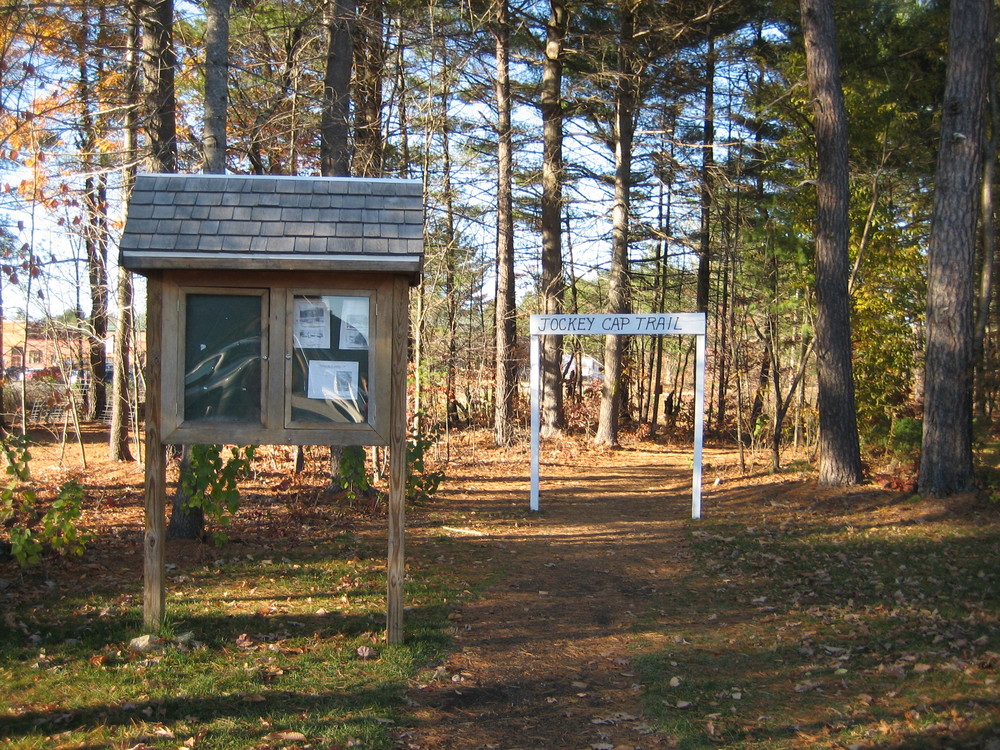 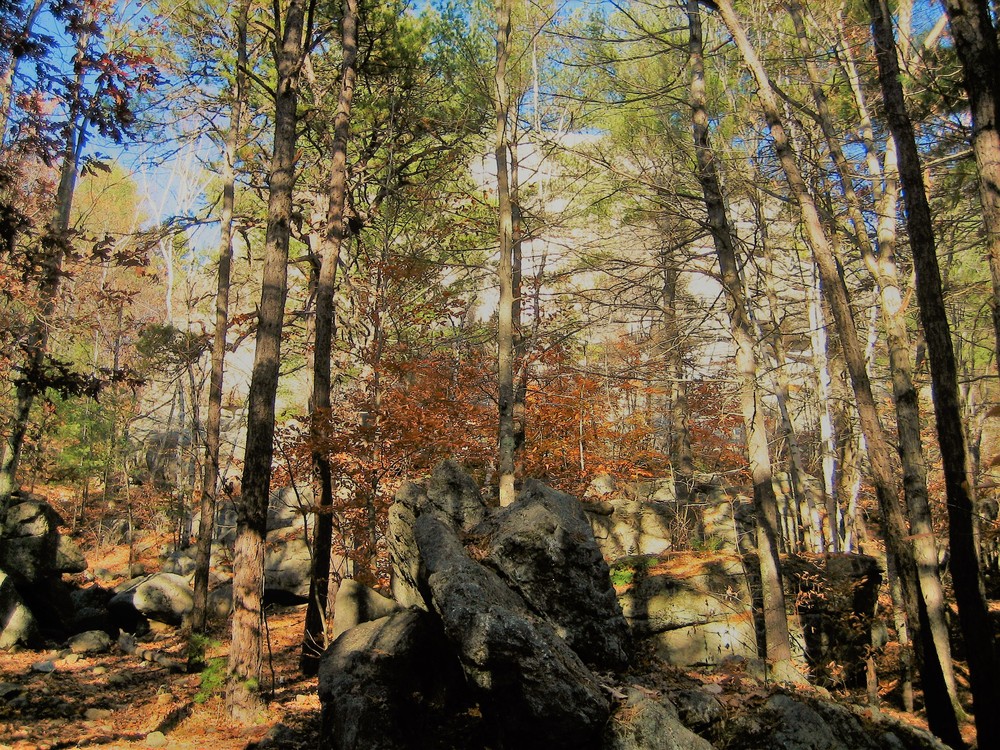 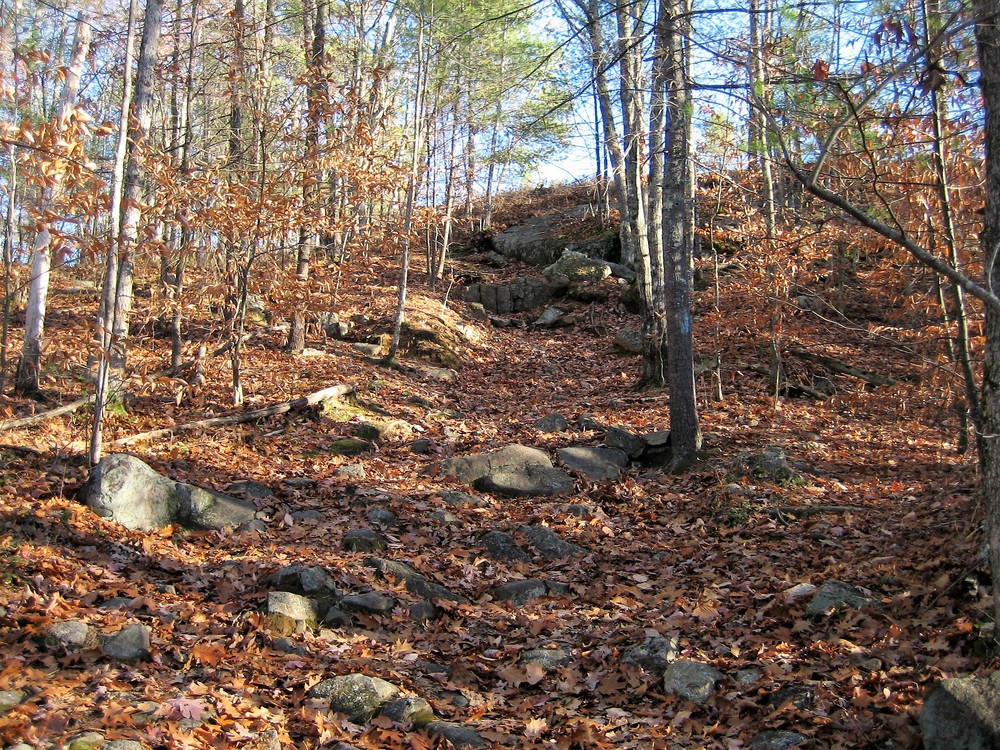 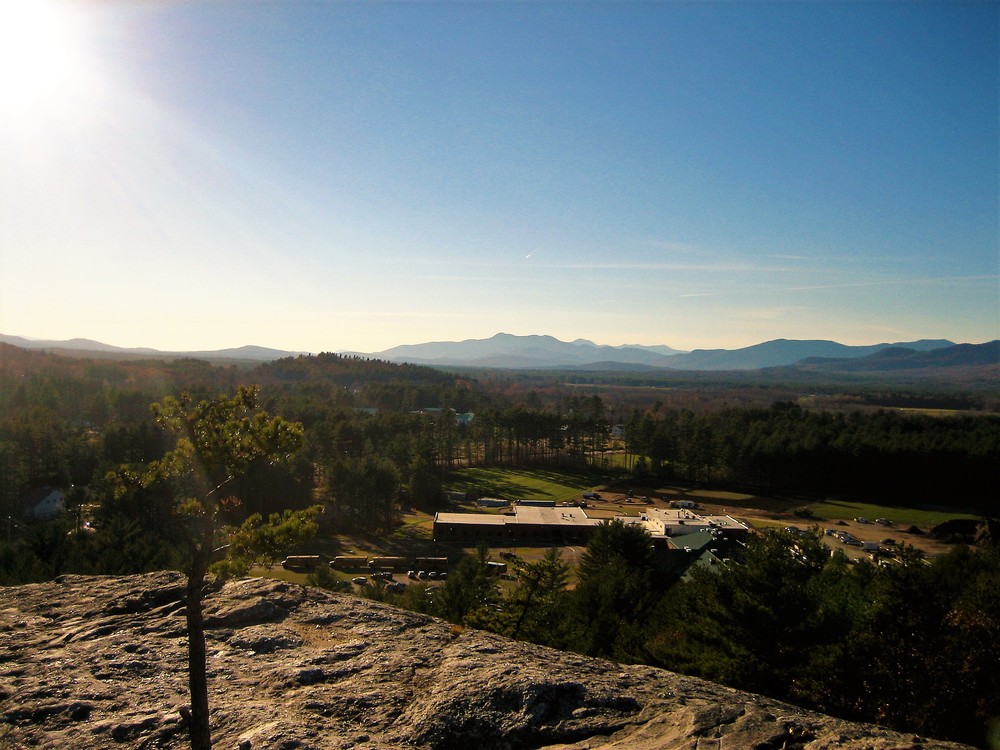 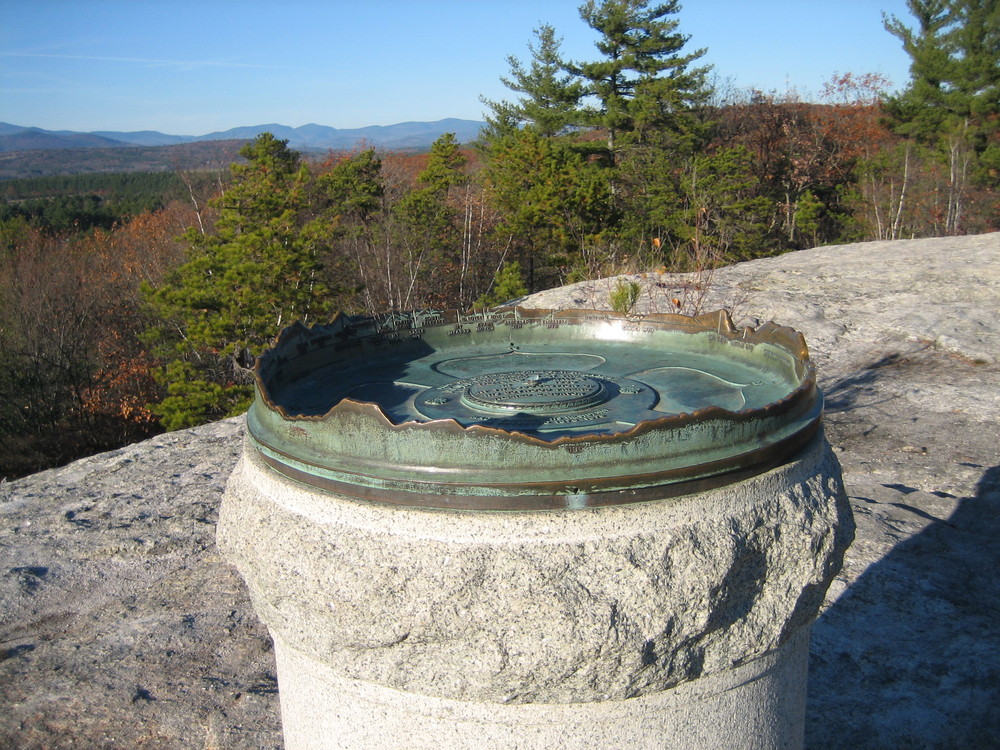 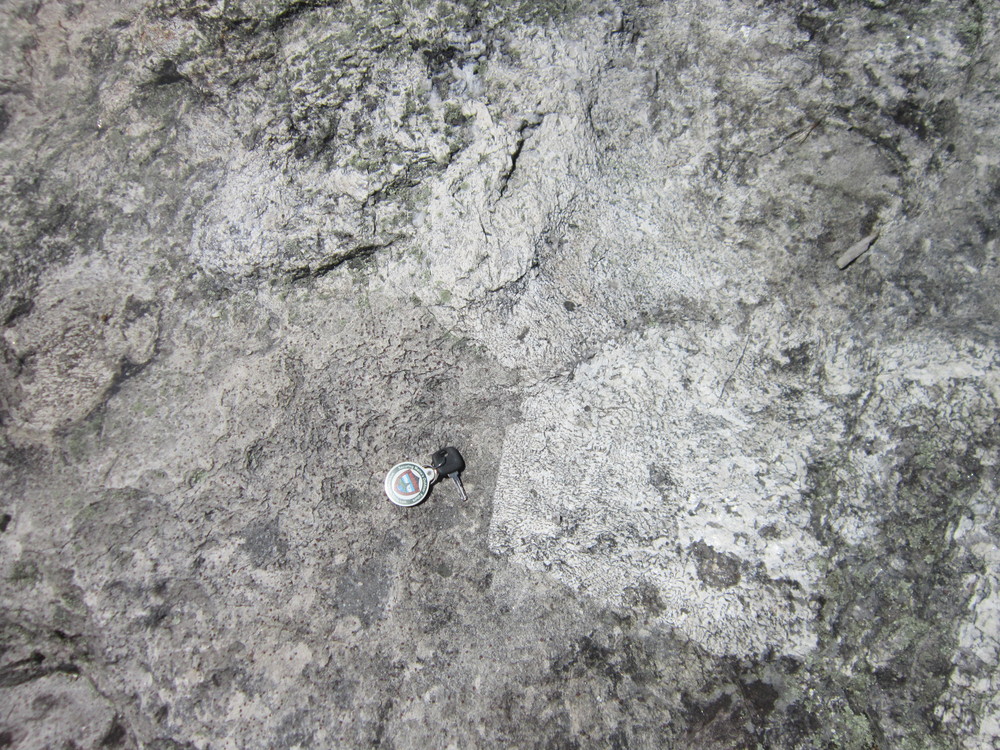 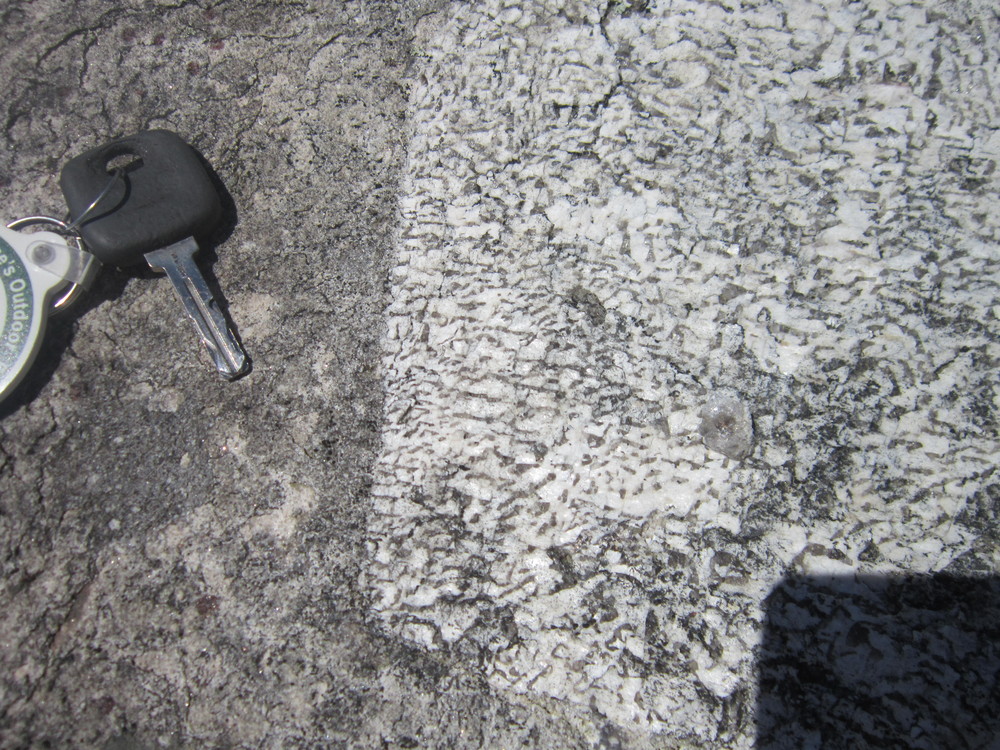 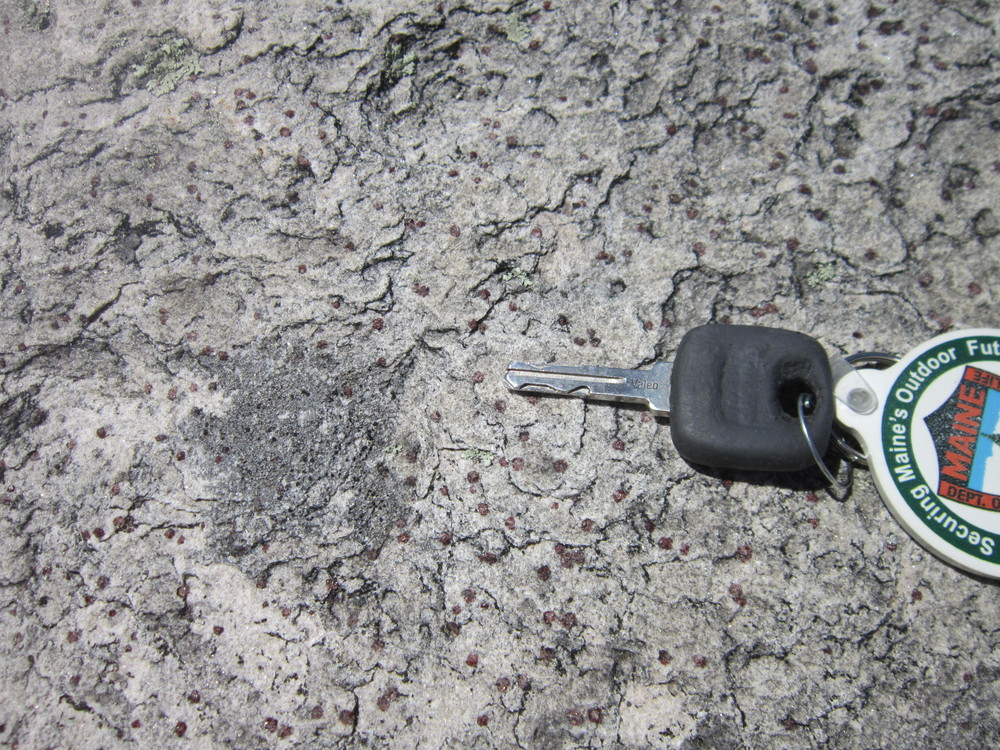 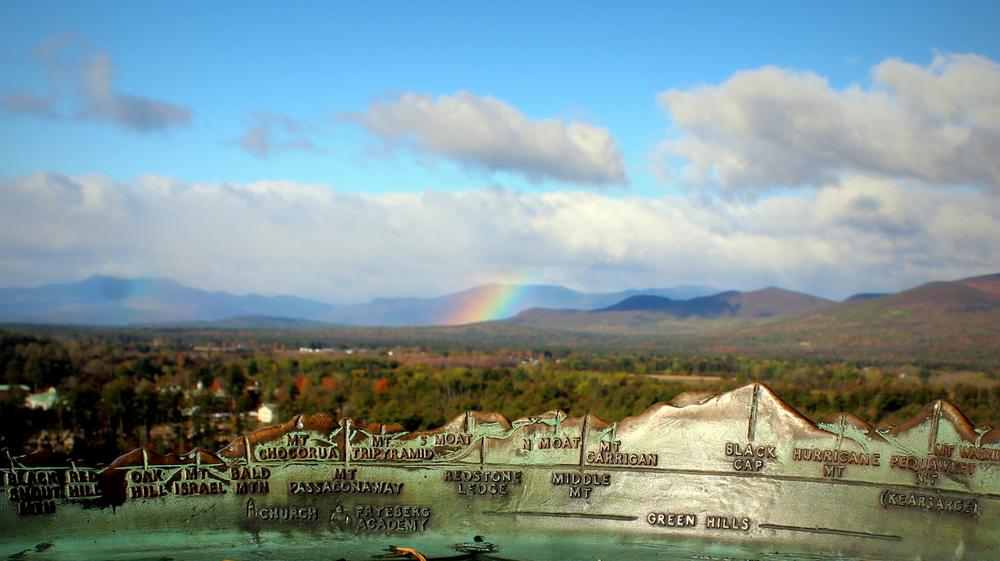 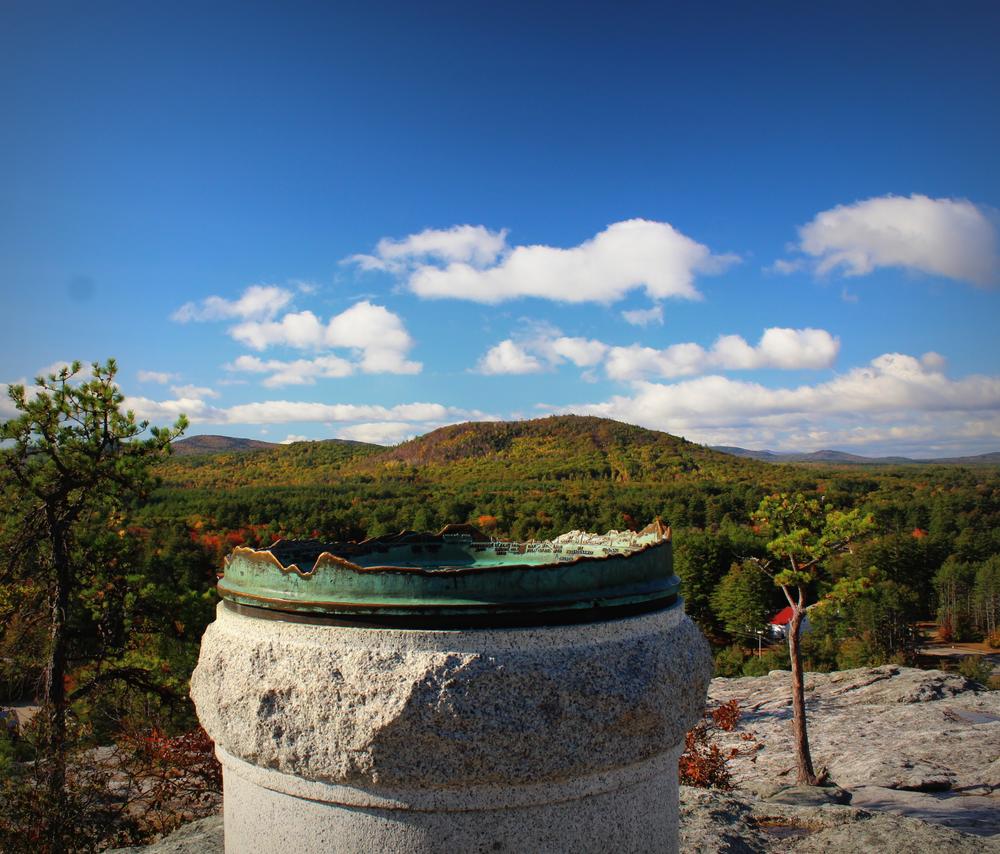 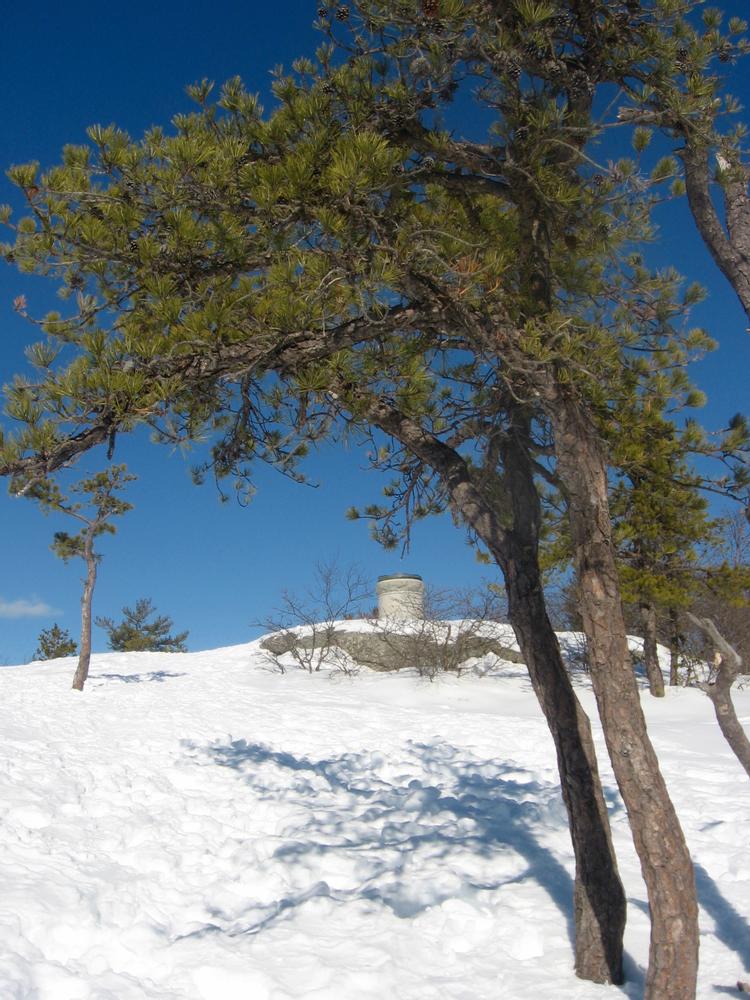 Add a Photo
Jockey Cap Rock is a striking granite outcrop in the Saco River valley, shaped long ago by glaciers. A short trail leads to the top of the dome, affording expansive views of the river valley, surrounding peaks, and the town of Fryeburg below.
Trail Activity
Length
0.8 miles, Round Trip
Difficulty
Moderate
Town
Fryeburg
Surface
Dirt/Forest Floor, Rock/Ledge, Grass
Pets
Permitted
Fees
No
Details

The Jockey Cap trail proceeds past the kiosk and enters the woods along a wide gravel and dirt path. The trail bends to the right to bear away from the Mollyockett Middle School and emerges behind the Dollar General. Turning again, the trail enters deeper woods and begins to climb. Within a few hundred feet the trail passes a forested boulder field at the base of Jockey Cap Rock. Small caves and excellent bouldering may be found here. Continuing past this boulder field to the left, the trail winds westward around Jockey Cap and climbs steeply for 0.1 miles before breaking free of tree cover and ascending to the apex of the rock.

Jockey Cap Rock is crowned by a monument to Robert E Peary, commonly credited as the first explorer of European descent to reach the North Pole. This monument features a panoramic landscape compass, with every visible summit depicted to scale and aligned for ease of identification. Views to the north, west, and south include the Saco River valley, oft snowcapped peaks in the White Mountains and the town of Fryeburg below.

Jockey Cap Rock is not a glacial erratic, but instead a granite outcrop of bedrock that was scraped by the glaciers' movement over it. The glaciers were probably responsible for the boulders at the southern base of the Cap. These boulders are a favorite spot for rock climbers, as are the west and south-facing cliffs of the Cap itself.  The boulders at the base have formed caves that are fun for kids to explore. Under one of these boulders is a cave that is rumored to have been used as a seasonal home to a Pequawket Native woman named Molly Ockett. It is believed that Molly Ockett was a healer who used native plants and concoctions to cure the ills of the Pequawket people as well as the white settlers. She traveled widely throughout New England and Canada. The elementary and middle school at the base of Jockey Cap is named for her. In the 1930s Jockey Cap was a ski area and was home to Maine's first rope tow.

From the junction of ME-5 and US-302 in Fryeburg: Travel 0.5 miles east on US-302/Bridgton Road. Turn left into the parking lot of the Jockey Cap Motel and Country Store just before the Dollar General. Parking for the trailhead is located on the far left of the lot, within view of the trailhead kiosk.