This year I am hoping to get some group or one on one hikes together. I would love to interview other people with disabilities about their outdoor experiences. The more perspectives we can get the better the information will be and the more progress we can make. If you're interested, contact us!

The Debe Park River Walk is a fully paved half mile long trail that follows along the banks of the Kennebec River across from downtown Skowhegan. The trail starts across from the water treatment plant. The parking lot is paved and really big with plenty of space. 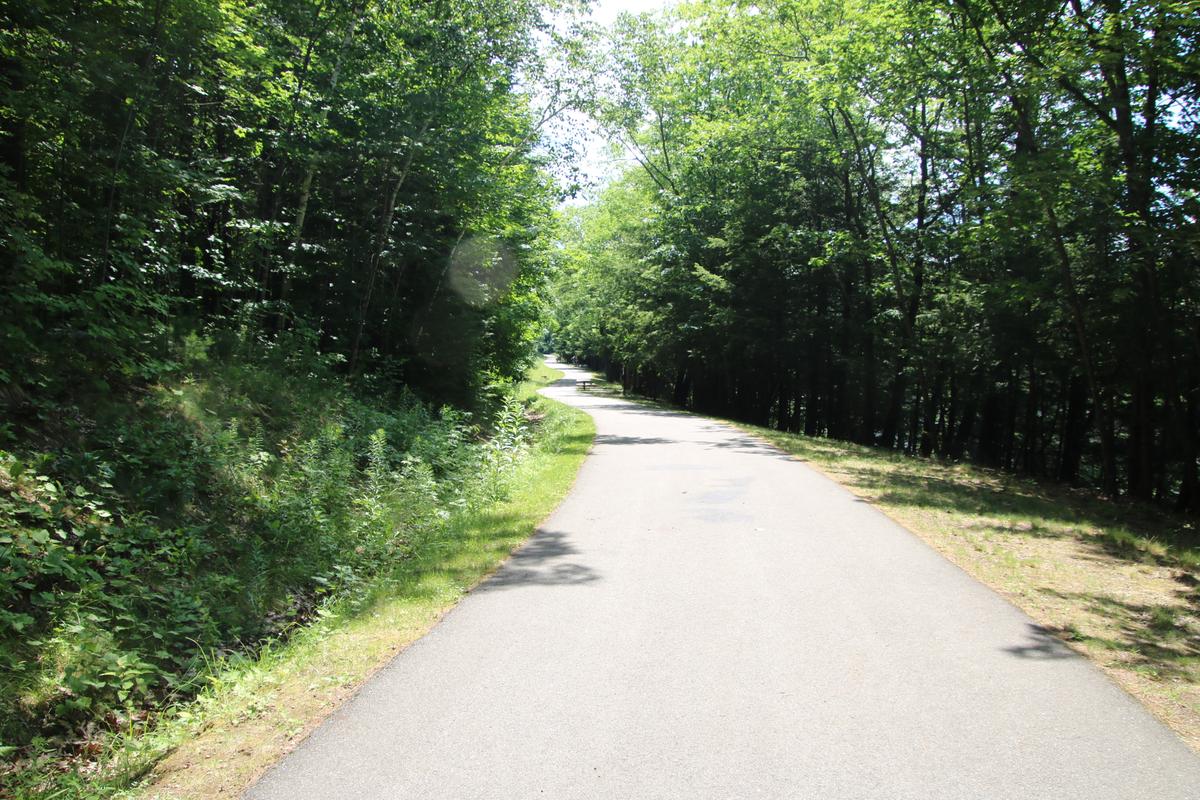 There is a unique gate at the beginning of the trail that I found to be really ingenious. It looks like a normal gate with two sides that open from the middle. On closer inspection, I found the two sides are offset allowing ample room for a wheelchair user to turn and go around the gate. The design keeps out motorized vehicles and ATVs but allows wheelchair users and others to pass through. 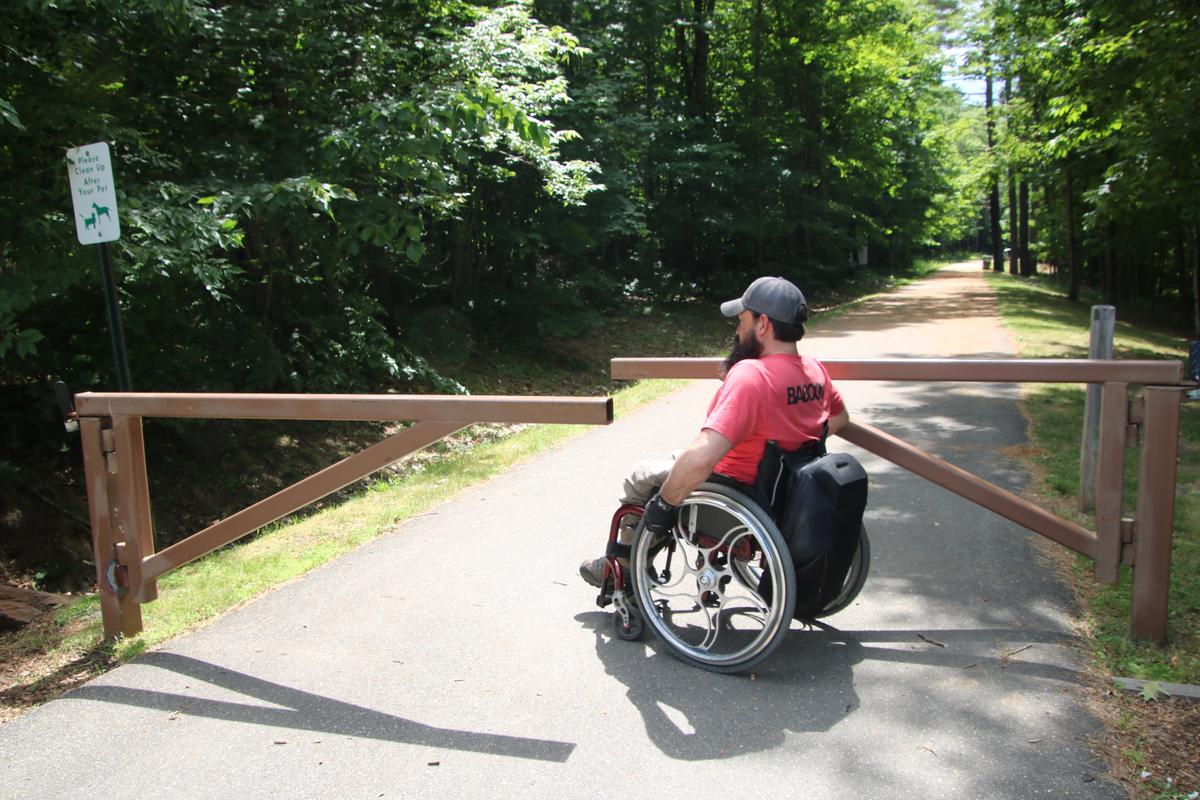 Enock going up to the gate at the River Walk. 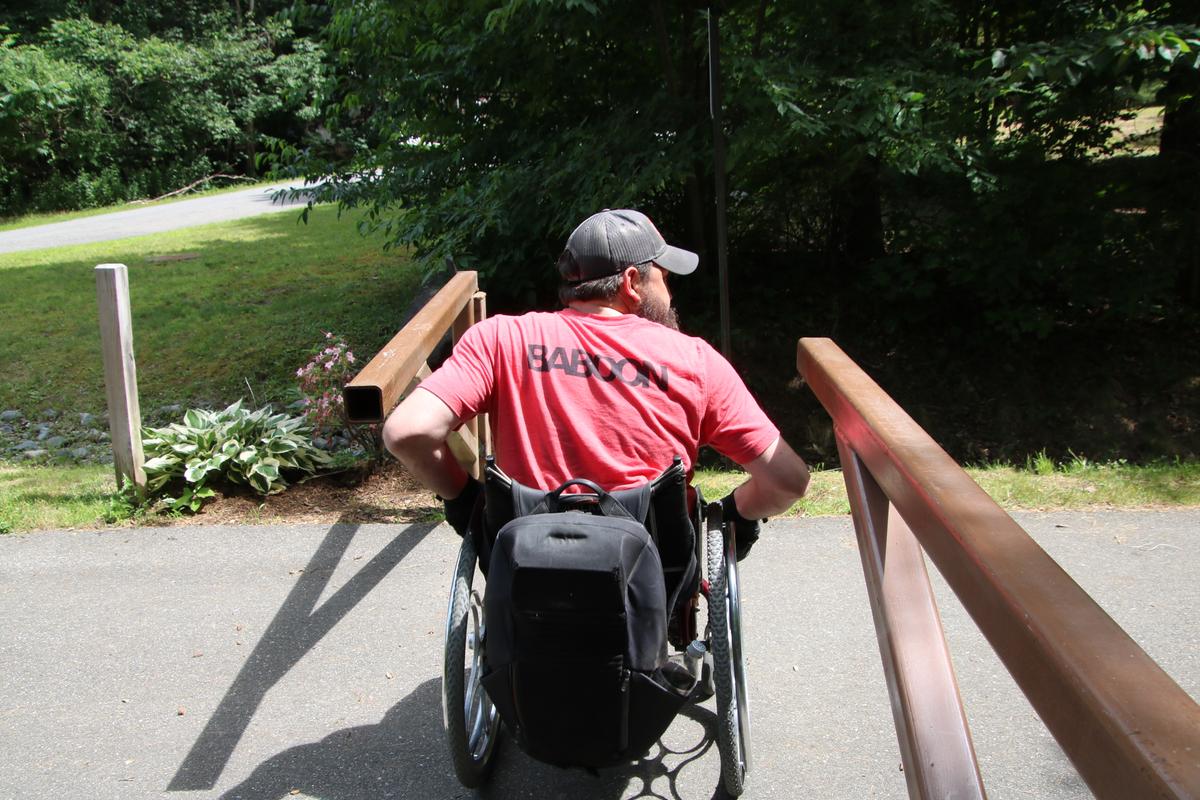 And easily making it through the opening.

From the gate, the trail is very easy to roll on. There are strategically placed exercise stations along the side. They aren’t made for wheelchair users. I did try a couple of them.

I thought this one was a push-up bar. After struggling to either push it up or bend that large steel bar, I realized I was supposed to pull it down. It was meant to lift the person that was seated. There aren’t any instructions on the machines. I am going to blame it on that - haha. 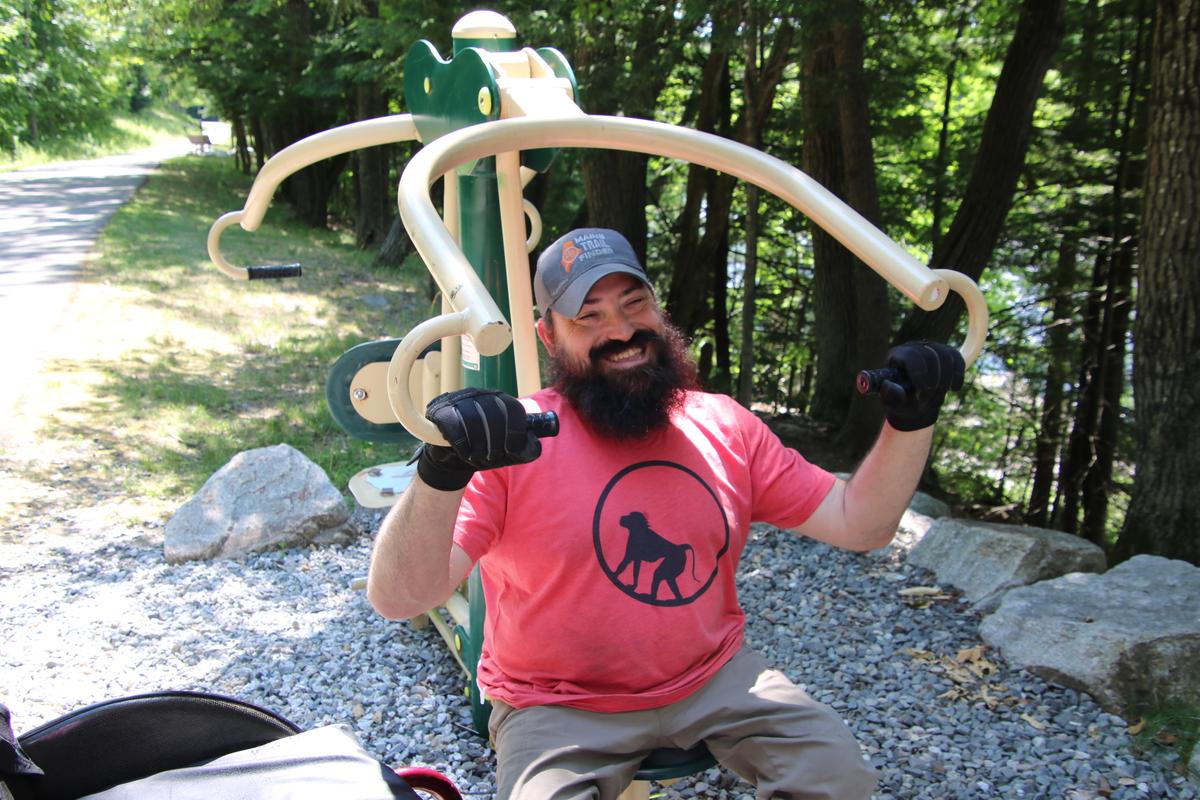 Enock trying one of the exercise stations.

Rest stops are scattered along the trail with beautiful views of the river. They did an amazing job thinning out the vegetation while leaving the edge forested.

Another great set of rest stops has accessible picnic tables and they even put the accessible spot on the side facing the view. Yes, I have seen it the wrong way before.

Enock enjoying the view at a rest stop. 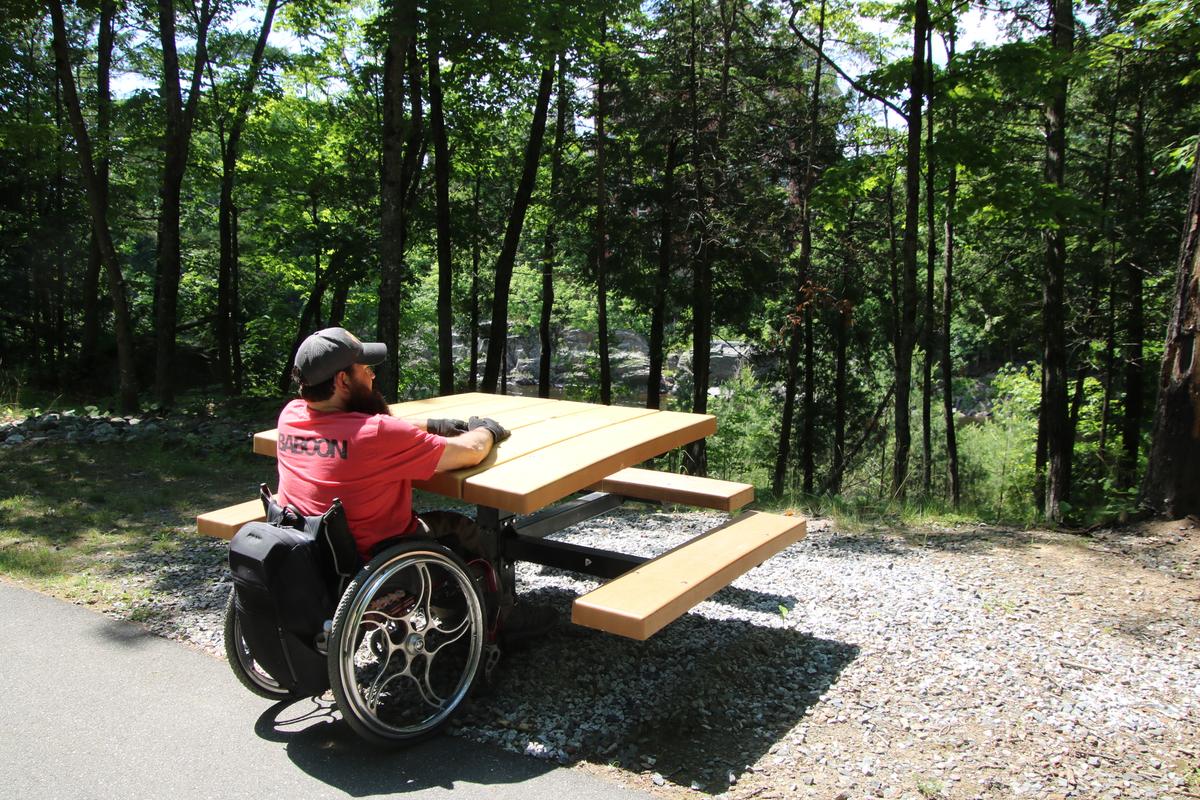 And from an accessible picnic table.

The turnaround point for the trail is at the top of a switchback hill climb. It isn’t a steep grade but it is quite long. I would say at least two hundred feet uphill. I stopped for a break at the top of each section. 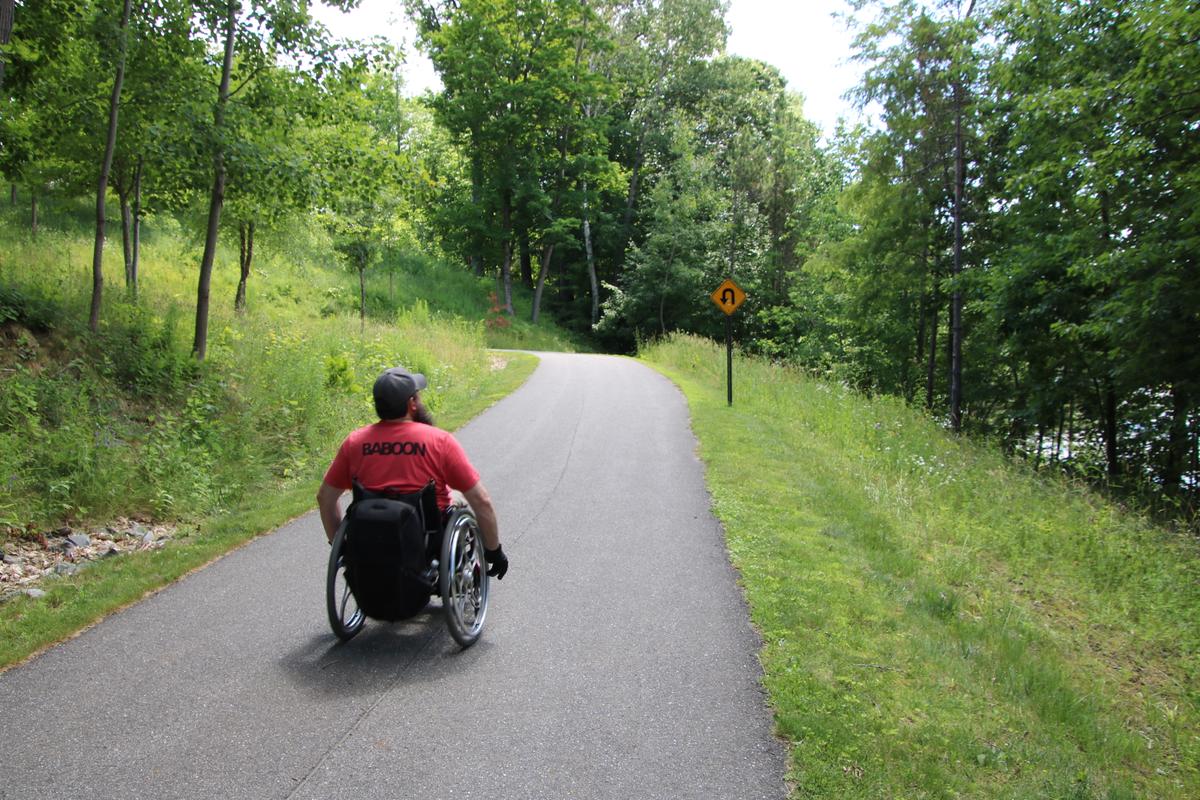 Heading up the switchbacks.

This trail is definitely accessible and worth checking out!

I knew the Philbrick Trail started across the parking lot from the end of the River Walk. After finishing the paved trail, I had Sandy go ahead and check out the beginning of the Philbrick Trail to see if it was doable beyond what I could see. She gave me the ok and the adventure began. 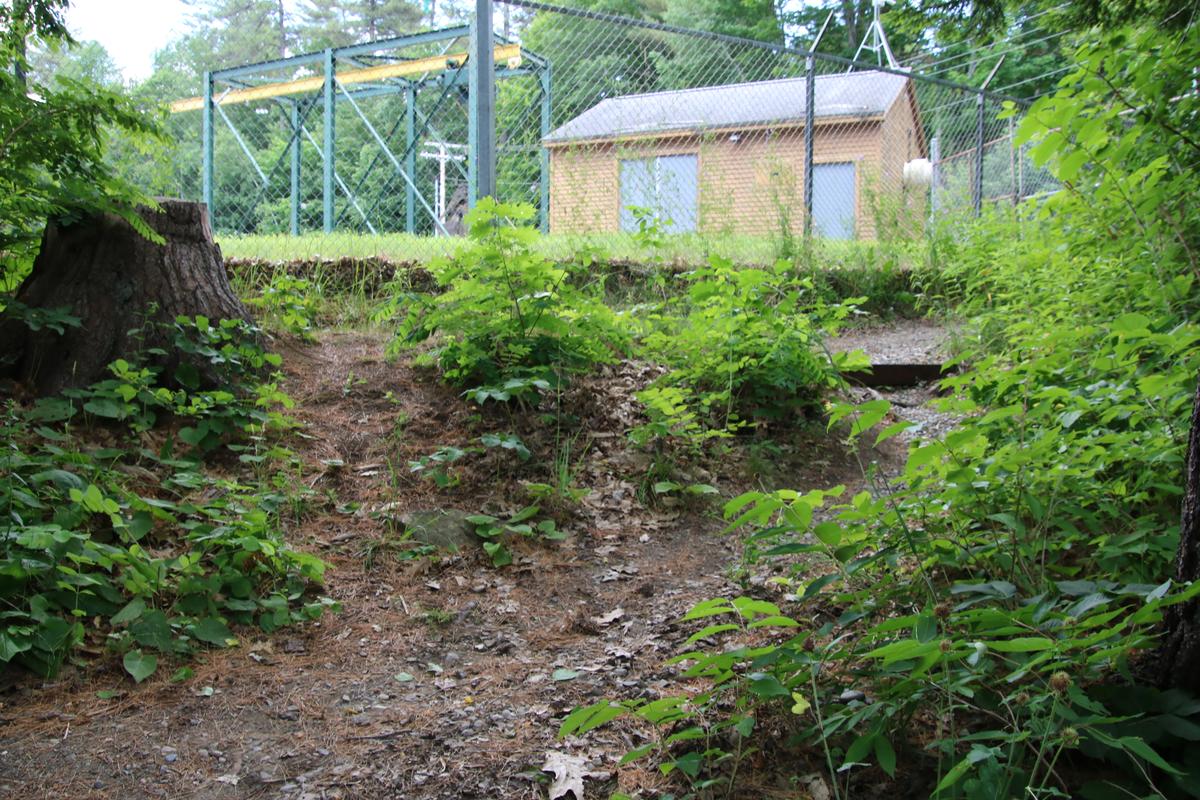 Eroded incline at the beginning of the trail.

The trail started with a short steep downhill. I had Sandy back me down over this short incline. I didn't want to end up in the river if I got out of control. After this, the trail looked really good. It was wide and mostly flat. 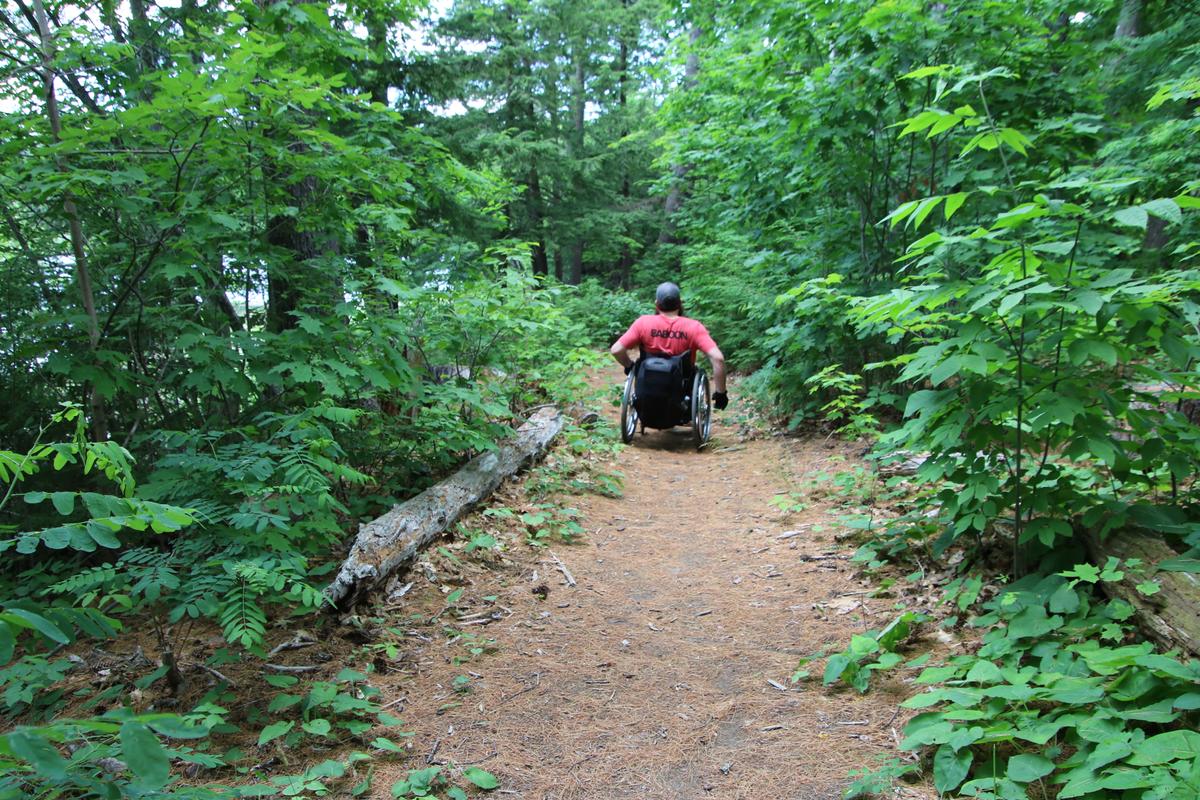 The flat section of trail.

There are sections of significant roots. The trail is so wide it is easy to maneuver around them. 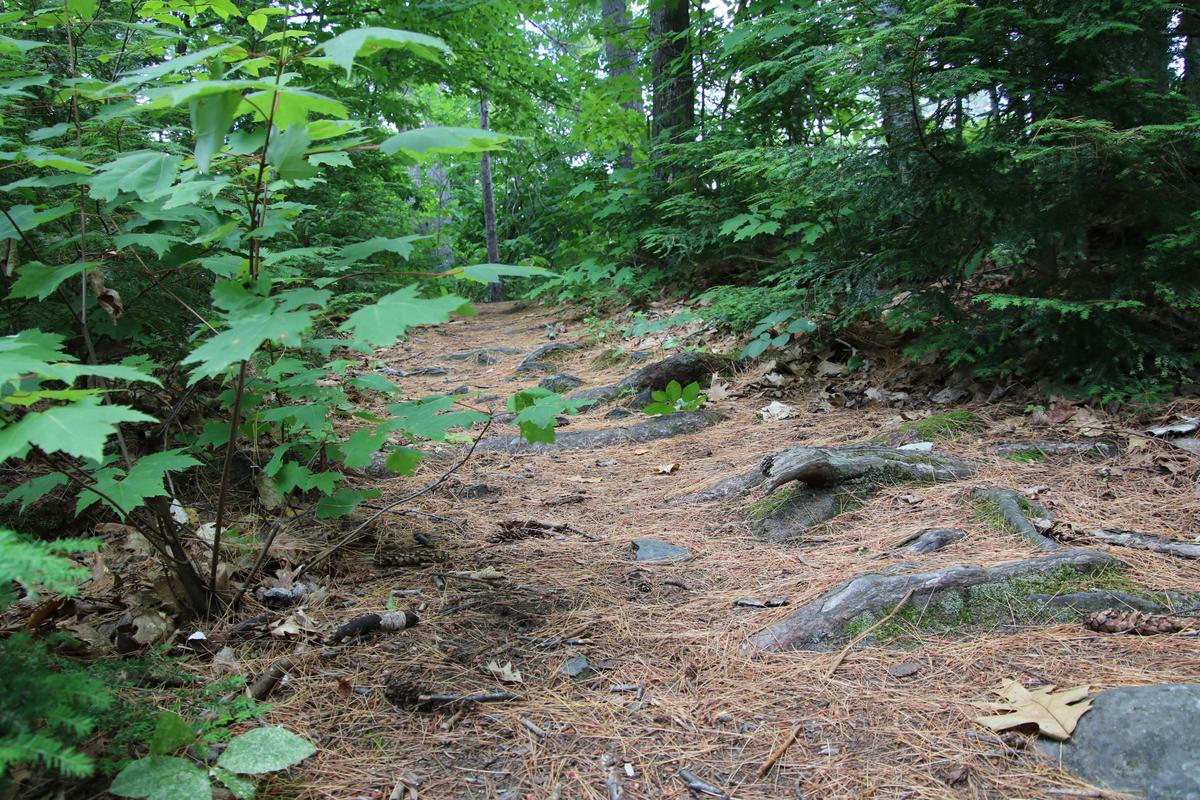 Roots on the first section of trail.

There is a really nice beach area at the end of this easier section. We later found out the locals call it "Beer Can Beach." I did happen to find a liquor bottle there so it lived up to its name. Getting beyond the litter though, it is a really beautiful spot to take in the view of the Kennebec River and access the water. 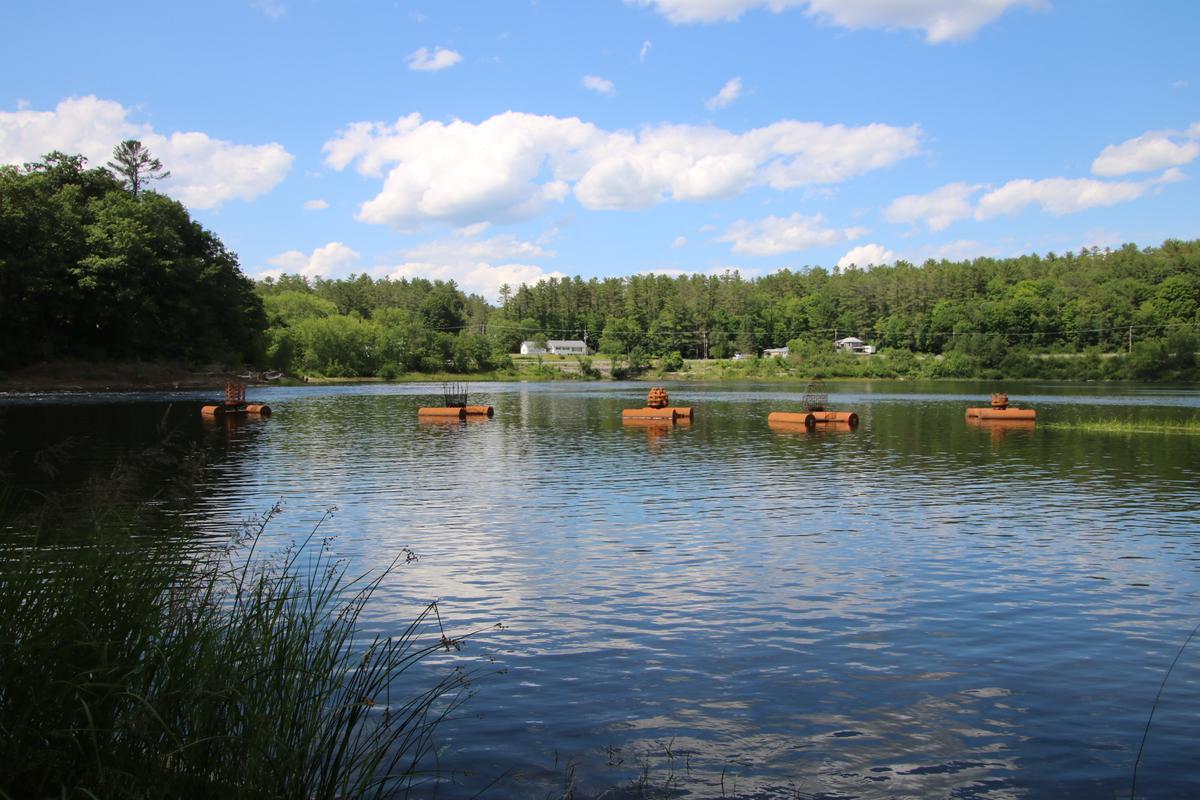 Sculptures in the Kennebec River viewed from the beach

We also found out later the sculptures viewed from this beach are lit up with fire during river fest. They represent various aspects of Native American life on the Kennebec.

This is also where we probably should have turned around. I would rate the trail Wheelie Moderate up to this beach. There are a few sections where there are rocks and roots that made it slightly difficult but not impossible to proceed.

We saw another beach ahead on the trail but there lots of logs all around it from when the river flooded. To get to that beach I had to cross an almost too small boardwalk. At least it was a boardwalk and not a bog bridge. It was about 28 inches wide and my chair is about 25 inches. I lined up one side with the edge and just made sure I stayed in line with it. I made it but it was definitely a nerve-racking experience. 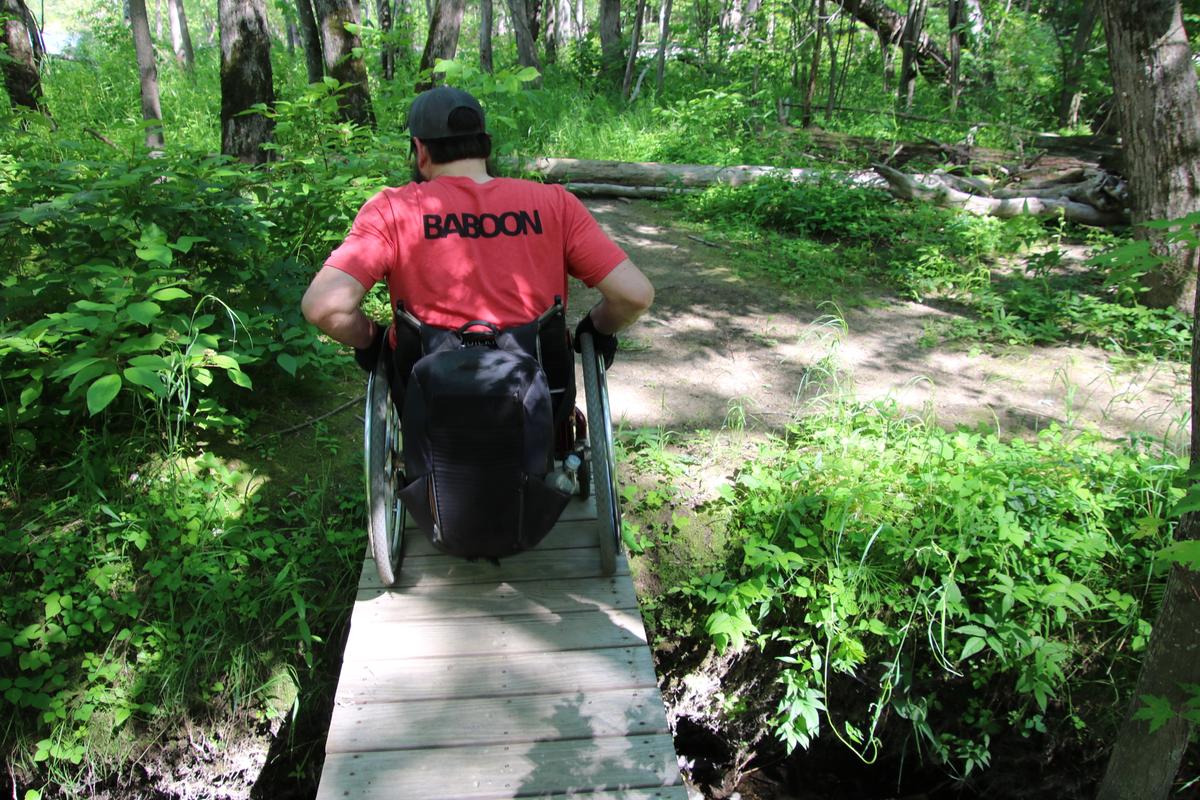 Making it safely across the narrow bridge.

The next obstacle which you can almost see in the bridge picture was a fallen tree. I had to get out of my chair for this one. Sandy set it on the other side so I could hop back in. 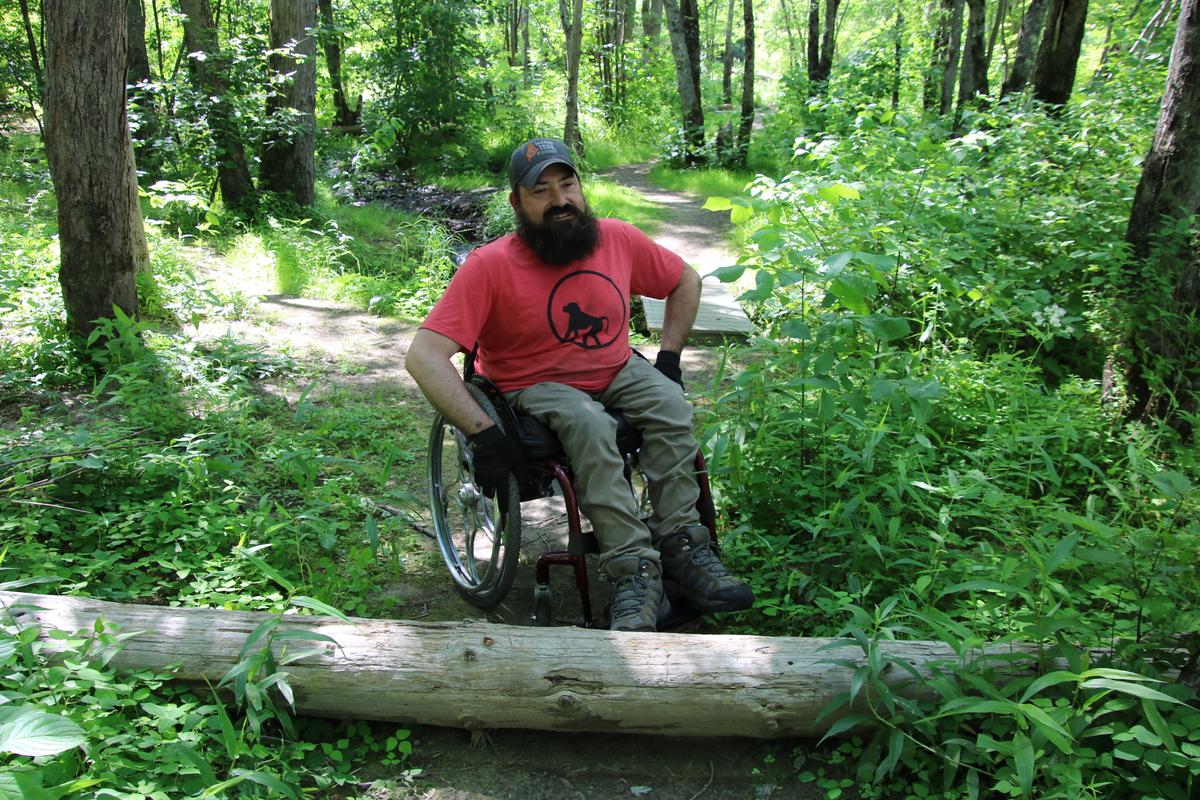 We finally made it to that beach and it was well worth the effort. I stuck to the section where it looked like very few people had walked. The sand was really solid and I had no trouble getting to the edge of the water. 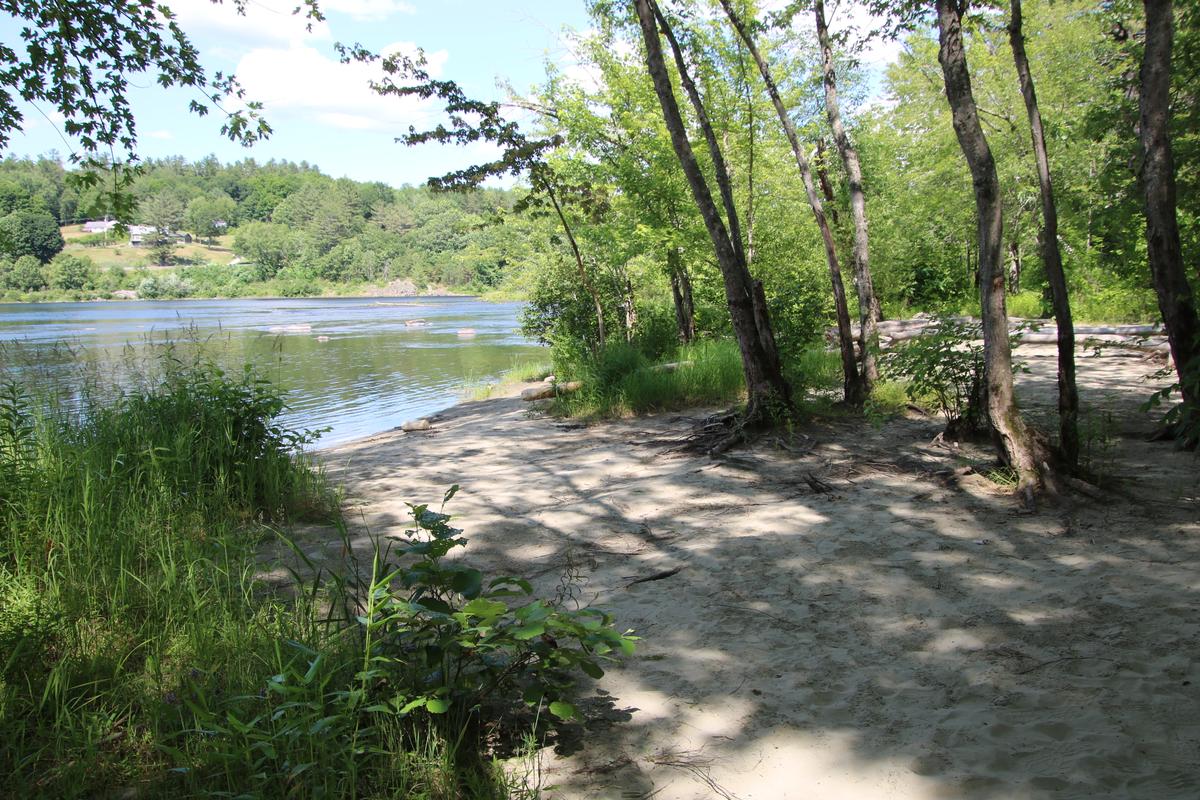 This would be another chance where we should have turned around. Behind this beach there is a mass of washed-up trees. I had to use my route-finding skills to find a path through but not before sending Sandy ahead to see if we should try it. She again came back and said as long as we could get passed the trees it looked good. We picked a path and made it to where the trail entered back into the woods. I should mention that the trail is blazed with blue marks and was really easy to follow. 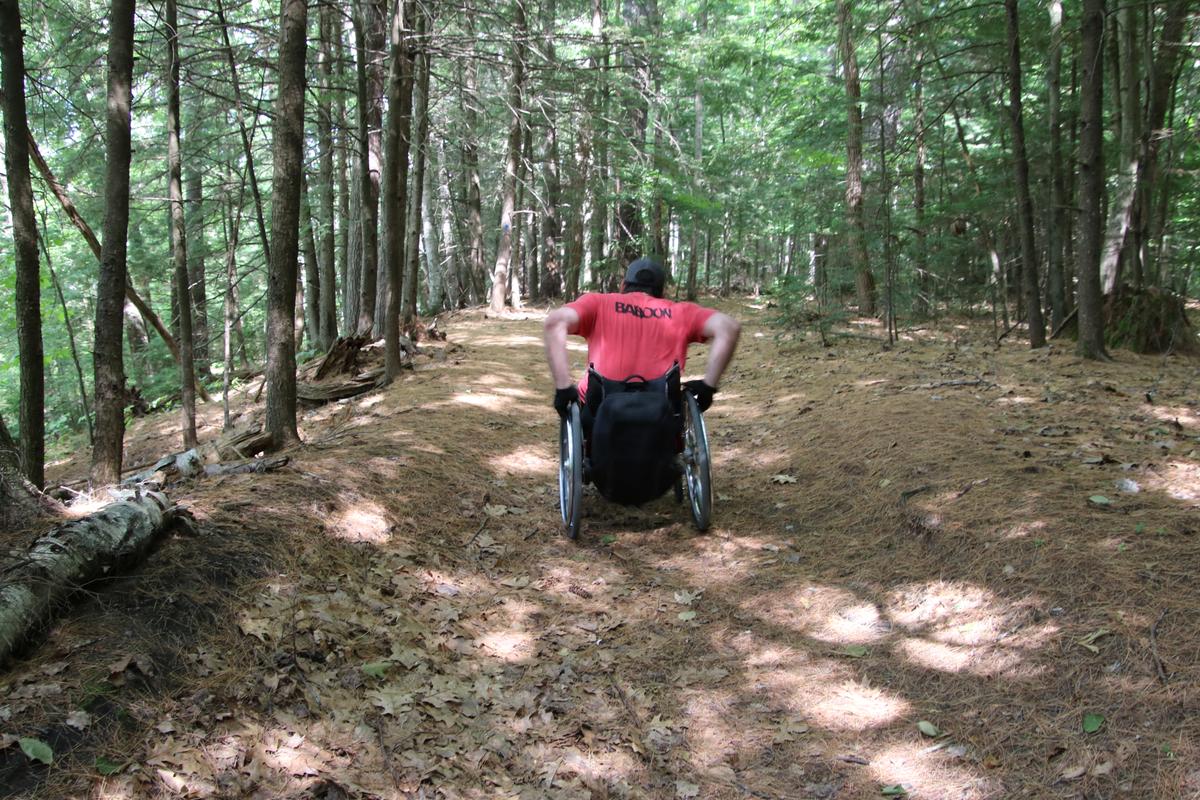 Past the washed-up trees and back in the woods.

This was a bit of an accessible illusion. What was about to come would make us question why we didn't turn around the multiple times we talked about it. A massively steep and rocky hill was in our future. 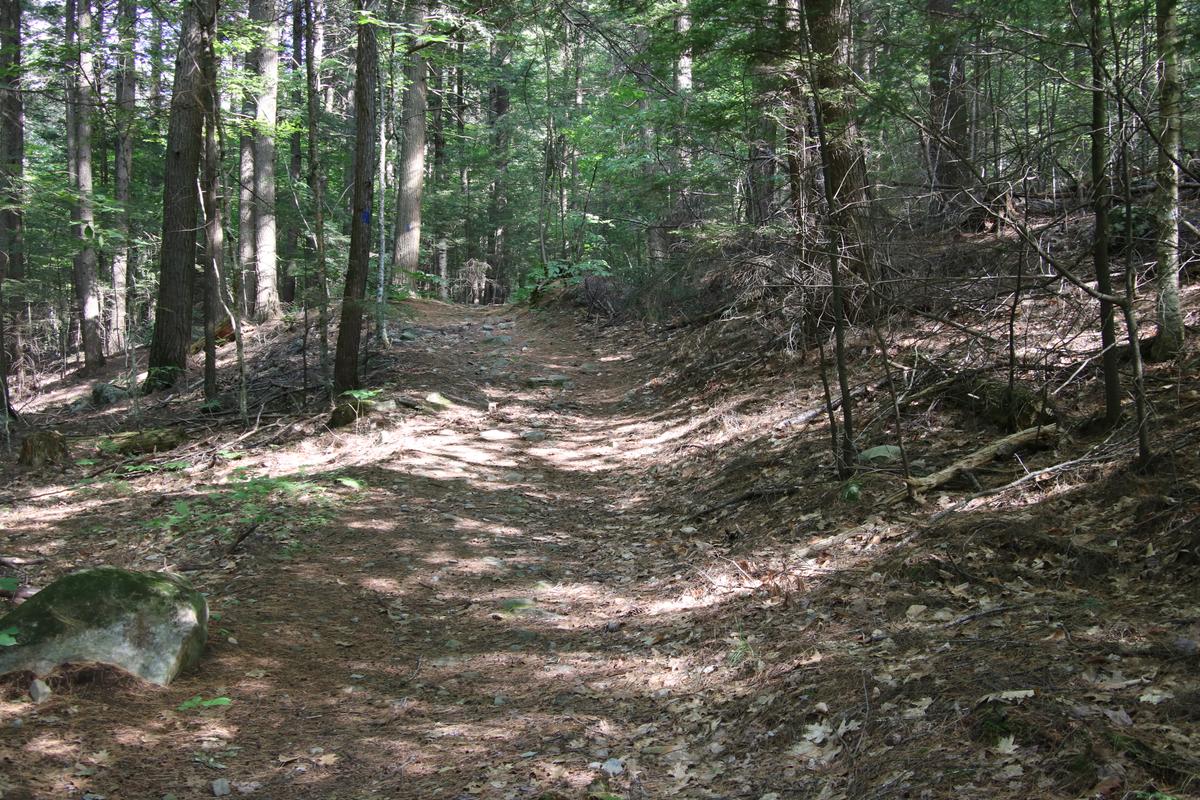 We sat at the bottom of this for quite a while going back and forth - should we or shouldn't we? "I don't know, it's up to you," was said quite a few times. We eventually decided to try it after I said I could see a path but we would have to do it in four stages. Sandy put in a massive effort to get me to the top of this one. We did make it.

At the top, we had a great encounter with a woman who was walking in the opposite direction. Come to find out she is the one that builds and maintains the trails. Once again I forgot to get her name. She informed us that if we had taken the white trail it would have cut out this hill. She made the white trail specifically for that reason. We saw the white blazes but decided to stick with the trail we knew. It was amazing getting to talk to her and give her some feedback that she asked about. She puts a lot of thought into how the trails are made and designed in order to try to accommodate as many people as possible. She told me that she cuts them wide for wheelchairs but also for people who might feel claustrophobic or unsafe if the trail was tighter. She is also the person that cut the vegetation back on the accessible trail to open the views. I wish I had gotten her name because she deserves recognition for the great work she is doing. She recognized me from the news so hopefully, she will read this. If you read this please leave your name in the comments! And thank you again!

From the top of the hill, the trail was much better, but I had a couple of moments where I had to think about how I was going to proceed. One was when we came to a water bar made of rocks. I had Sandy back me over it to avoid getting out of control. 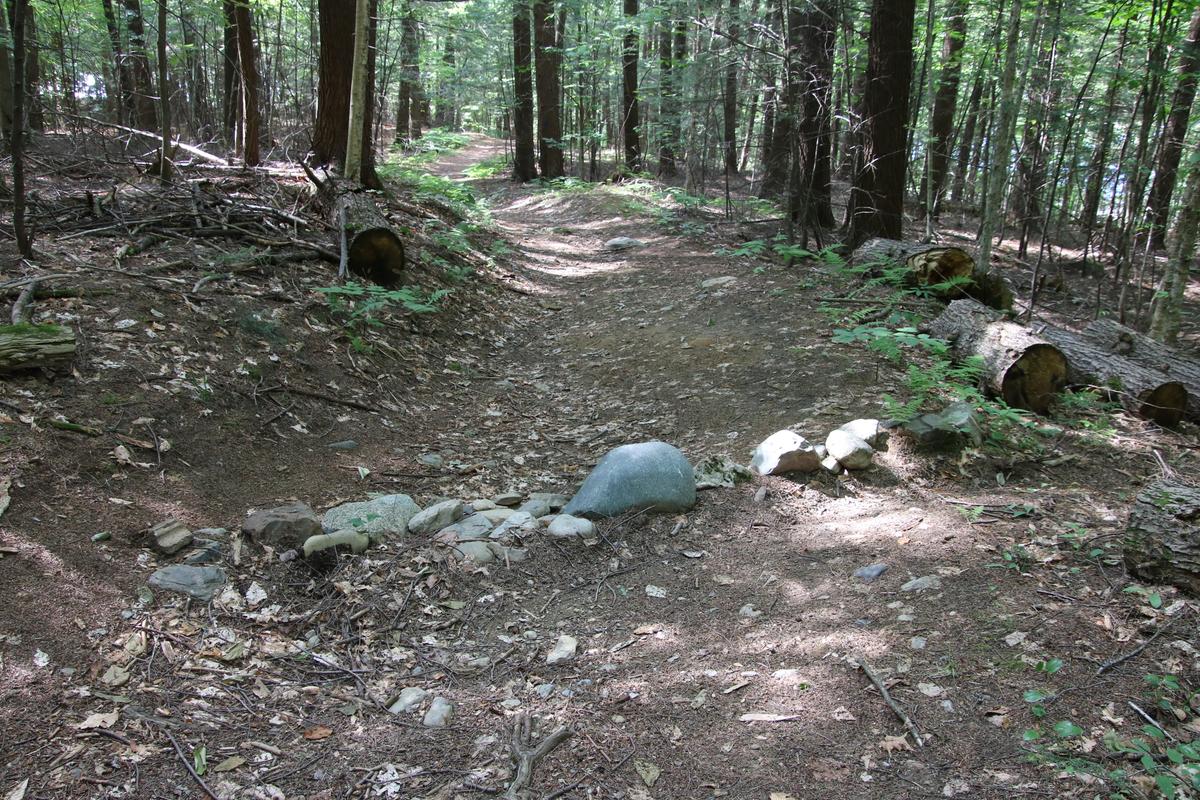 Rock waterbar on the trail.

After the rocks there is a very steep hill, but I managed to get down on a wheelie.

Once at the bottom, the trail exits by the fence around the treatment plant. The funny thing is that there is a perfectly-made boardwalk at this spot. I am not sure why the other one was so narrow. 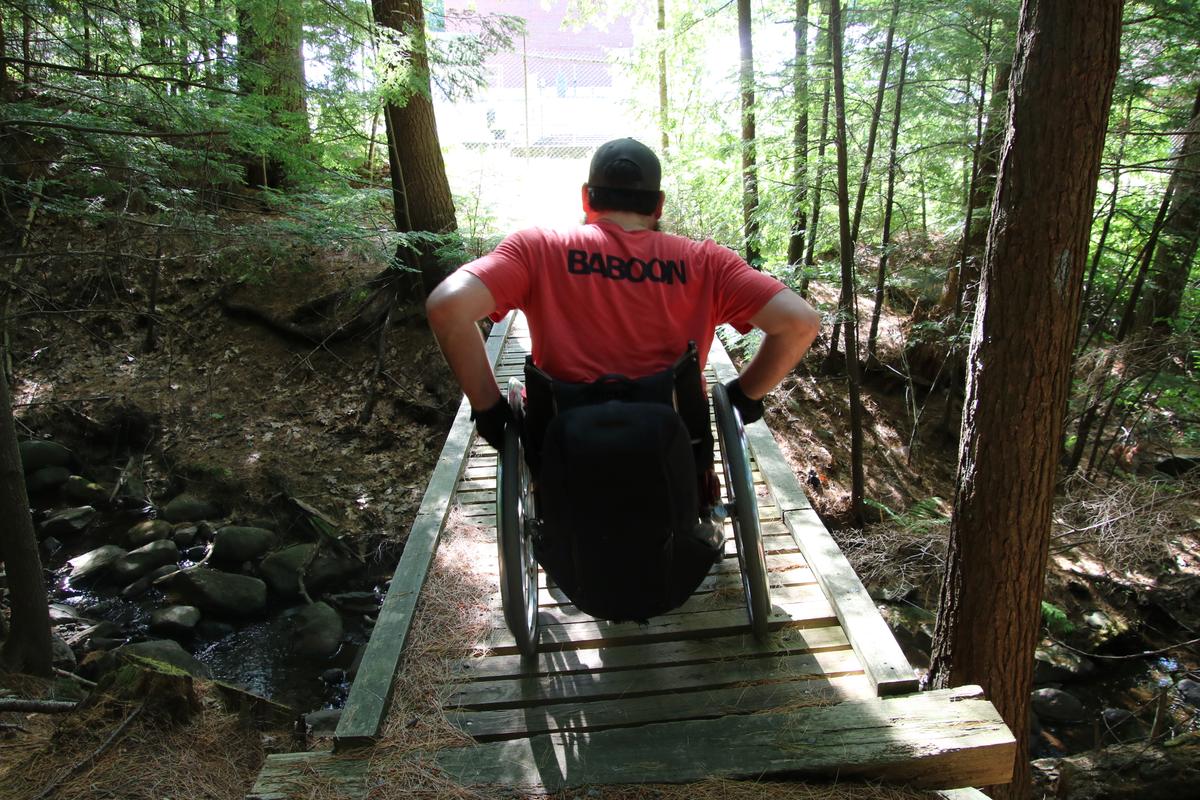 Crossing the wider boardwalk back to the water treatment plant.

I would rate this trail Wheelie Moderate up to the beach due to obstacles and the steep incline at the beginning of the trail. There are long sections that are wheelie easy. I would turn around at the first beach that we came to and not cross the boardwalk for safety's sake. If you are adventurous and want to try it, it is worth the effort, but turn around at the second beach. (Although I would love to see someone try that White Trail just to see if it makes the trail doable. If not I will go back and do it at some point!)

If you have a different type of mobility issue or a different disability and visit this trail or others, please comment on this post and give us your feedback. The more knowledge we gather and share, the more people we can get outside using the trails of Maine!