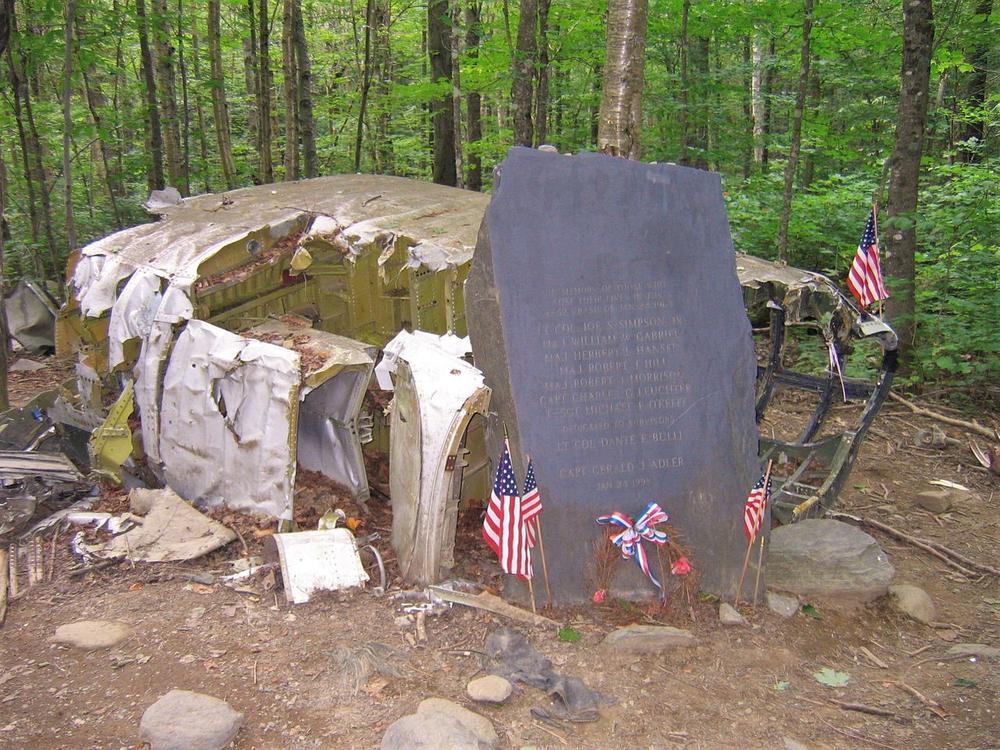 Add a Photo
On the slopes of Elephant Mountain, a memorial and wreckage from a 1963 plane crash scattered through the woods provide a somber glimpse into the past.
Trail Activity
Length
0.4 miles, Round Trip
Difficulty
Easy
Town
Bowdoin College Grant West Twp
Surface
Dirt/Forest Floor
Pets
Permitted
Fees
No
Details

On the slopes of Elephant Mountain, this wide and clear path meanders through the plane wreckage left from the crash of a B-52C Stratofortress that occurred on January 23, 1963, when turbulance caused the vertical stabilizer to fail, sending the plane on its low-level radar mission into the mountain. The pilot and navigator survived the crash, while the other seven people aboard died in the wreck. The navigator, Gerald Adler, is the only person to survive an ejection from an aircraft without his parachute opening.

A sign at the entrance to the trail asks visitors to treat the area respectfully and leave it intact. As the trail heads into a dense pine forest, it encounters the first fragments of debris almost immediately. The smooth footpath continues through the woods among torn and shredded bits of metal in every direction. After 0.2 miles the trail reaches the fuselage of the plane, where a black slate memorial honoring the survivors and the seven men who lost their lives in the crash has been erected.

The pieces of the B-52 were once removed from the site, but most of the pieces were later returned to the woods as a memorial. The site has been designated off limits to all future salvage operations and the area surrounding the crash site designated as a no harvest zone. Visitors are asked to treat the area respectfully and leave the wreckage intact.

From the blinking light at the center of Greenville, head north on Lily Bay Road for 6.7 miles. Turn right onto Prong Pond Road. Follow the signs for the memorial, and after about 8 miles you will see the trailhead and a parking area. These back roads are rutted and rugged, a tough car with high clearance is helpful.

Click on a parking icon to get custom directions
Comments (1)
Please Log In or Create Account to add comments.
thelastjedi60
Wasn’t the easiest place to find but when we got there it was a somber moment. It was difficult to imagine what they went through knowing they may not survive the crash. I couldn’t imagine what those last few moments were like. So I salute them for their service and sacrifice
Services
Map View Add a Service
These awesome businesses support our goal of connecting people to outdoor adventures in Maine!
Hang Tight!
Nearby services are loading
No Services Found
Find Services
Trail Alerts

Trails
Private Property
This trail passes through private property. Please respect the landowner and protect future access by staying on the marked trail and following all rules.
Roads
Logging Road Access
Access to the trailhead/put-in is on gravel logging roads managed and maintained to transport timber. Be aware that logging trucks have the right of way and be prepared to pull to the side of the road when encountering logging trucks. Do not park in the travel portion of the road or block side roads. Yield to any equipment working on roads. Logging roads may be closed during active logging operations.
Photos