Designed to the standards of the International Ski Federation, the ski trails are 4 to 6 meters in width to allow both classic and skate skiing when conditions allow. Grooming is done when conditions permit by volunteers. To maintain a level ski surface, snowshoeing, biking and walking are not permitted on the groomed surface. Furthermore, the trails are one-way for safety as speeds in excess of 25 mph can easily be achieved in the downhill descents.

Jim’s Trail (1.6 miles): Blue Blazes, Signposts J1-J9. Named for Jim McCarron by his family and friends for the fun and happiness he brought into people’s lives. The trail is marked with blue blazes. After leaving the stadium it climbs a short hill and the loop through the softwood forest before returning to the powerline above the stadium. The trail weaves through the tall pines and hemlocks as it descends to the brook through the Chicane. It then begins first a longer climb and descent before recrossing the brook. Two short but steeper climbs bring one back to the stadium. The Plateau Loop, the Ridge Trail and Split Rock Trail all cross Jim’s Trail and the Logging Road can be accessed to ride the Works Trail as well. The Sprint Loop also uses the same start and several sections of this trail as well.

Bill's Trail (1.6 miles): Orange Blazes, Signposts B1-B9. The blazes on Bill’s Trail are burnt orange. This trail descends quickly and then begins a nearly 50m climb to the top of the northern summit in BBRA. It climbs a second time to reach the southern summit and then descends into the “vortex” that culminates in the Nordic halfpipe – a wall to wall to wall descent down a narrow valley. The Sprint Loop enters from the right and they both climb the steeper FIS hill. After a quick descent, the trail enters the eastern end of the stadium and has one final short descent and climb to the finish. The Split Rock and Summit Trails all cross Bill’s Trail on the higher slopes and the Six Back Trail crosses near the stadium.

Sprint Loop (0.95 miles): This trail starts with Jim’s Trail but climbs directly up the powerline to meet Jim’s again. This trail is known for its  quick descents and steep climbs. The final climb is finished when you can overlook the stadium but the view is quick as you descend to meet Bill’s Trail  to return to the stadium. You leave Bill’s Trail as it starts the big climb and scoot over to the bottom of the halfpipe. Both trails now climb the FIS hill, the second and longer of the two required climbs for the sprint course. Another descent returns you to the stadium and into the finish loop.

Leif's Loop (0.8 miles): Purple Blazes, Signposts L1-L9. This trail is blazed purple.This loop trail extends Jim’s trail by 1.2 km. It leaves Jim’s Trail at 1.5K (K2) and descends to the logging road, soon leaving to begin a long climb up north side of the hill and then winds around a plateau before descending back to Jim’s Trail. It connects with Dave’s Loop at L5 to form a third 2.5 K ski loop. An alternative crossover to Dave’s Loop is at L4.  This short loop has the distinction of having the toughest long climb off the logging road as well as the most enjoyable descent back to Jim’s Trail.

Dave's Loop (0.8 miles): Red Blazes, Signposts D1-D9. This trail extends Bill’s Trail to a 3.75 km loop from the powerline (D1) and follows the bluff of the northern summit and descends via three hairpin turns to reach the logging road. After a fairly flat traverse you begins a long climb back to the Bill’s Trail rejoining it just past the powerline. The final climb, known as Dave’s climb, is the longest in BBRA; It also has the distinction of steadily increasing its slope as one climbs it. The Works, Double B and the Quarry Trails all cross or are nearby on this trail.

Old Logging Road (0.75 miles): It is the flattest of the trails at BBRA and can be skied in both directions except during race activities. This is the only multiuse section of groomed trail. Access is from the stadium and loops around on the flat area behind stadium parking.

The Groomer's Way (0.8 miles): This trail leaves Augusta Public Works and climbs up the waterline and along the water tower fence to the cemetery area and descends along the airport access road to the stadium. An extension goes right just below the water tower to meet Bill’s Trail. By taking the halfpipe cutoff (B6) to the water district road, the halfpipe can be avoided by this easier way back to the stadium. This trail also can be skied in both directions.

Beginner's Loop (0.7 miles): This first portion of Jim’s Trail is the easiest section for beginners. It follows Jim’s Trail until the power line where it turns right and returns to the stadium.

Blue Course (3.1 miles): This course is the original Morton Trails designed 5K course designed to international standards. The course starts out on Jim’s Trail and then passes through the stadium at 2.5K to ski Bill’s Trail. It is marked with blue 5 KM arrows along its route.

Red Course (3.1 miles): This course starts out on Jim’s Trail along with the blue course until 1.5K where it takes Leif’s Loop to the logging road and up the long climb. It then switches to Dave’s Loop at L5 where it descends the North Ridge to the logging road and proceeds to climb back up Dave’s climb. A small section of Bills Trail is skied in reverse to pick up the start of Dave’s Loop at the powerline. The course then returns to Leif’s Loop at D2 to rejoin Jim’s Trail and finish into the stadium. This course also meets international standards and is marked with red 5 KM arrows.  Easy Red leaves Leif’s Loop at L4 and avoids a tough climb and steep descent.

Gold Course (4.7 miles): This course utilizes all four of the Nordic ski trails. Beginning on Jim’s Trail, one skis to and completes Leif’s Loop before rejoining and finishing Jim’s Trail to the stadium. Switching to Bill’s Trail, one skis to the powerline near the summit and turns onto Dave’s Loop. After skiing Daves Loop to completion, one completes the climb to the top and then descends through the halfpipe. One final climb on FIS hill and then a descent to the stadium completes the Gold course.

Augusta Trails maintains specific trails for snowshoers, classic cross-country skiers, and skate skiers, please respect each of the different trail types. If you have questions or would like more information please contact Steward.AugustaTrails@gmail.com. 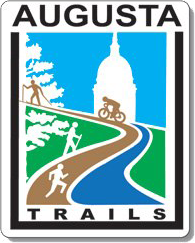 From Downtown Augusta, head north on Mt. Vernon Ave and turn left onto Bond Brook Road. From Civic Center Drive, head south and turn right on Bond Brook Road. Turn left on Tall Pines Way; the easiest access to the Nordic trails is at the Stadium Parking Lot; follow Tall Pines Way all the way up the hill to reach the Stadium Parking Lot. Parking is also available at Mt. Hope Cemetery off Winthrop Street. 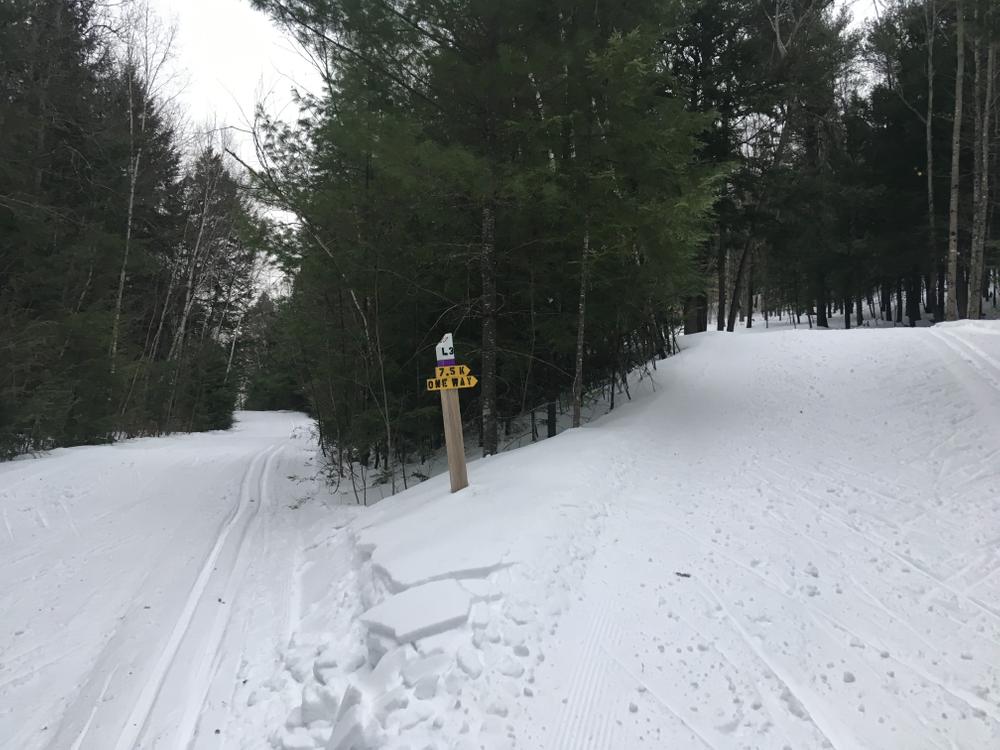