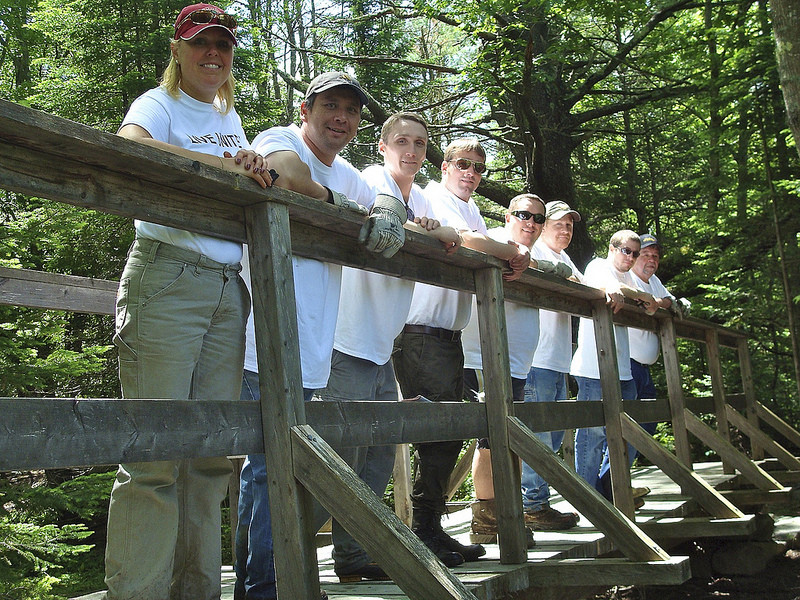 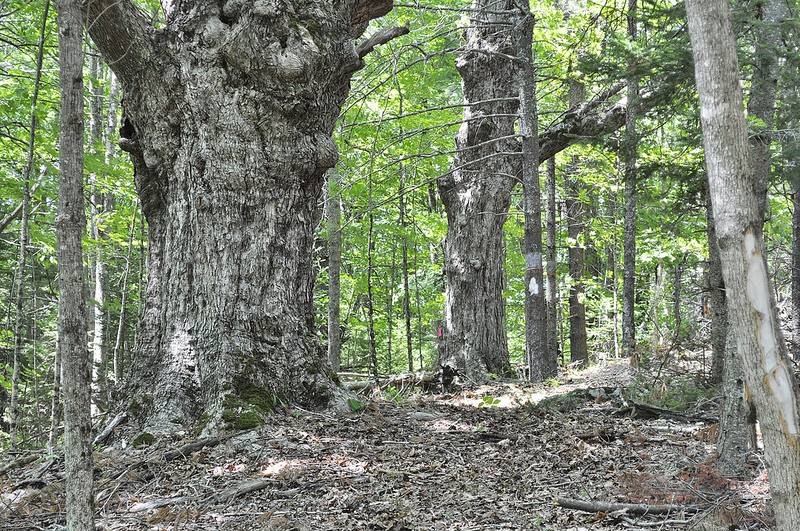 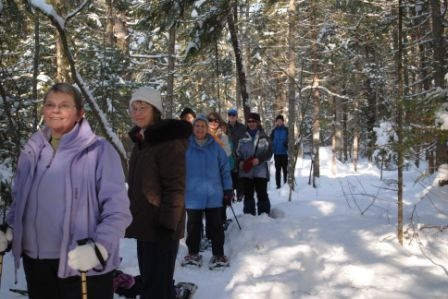 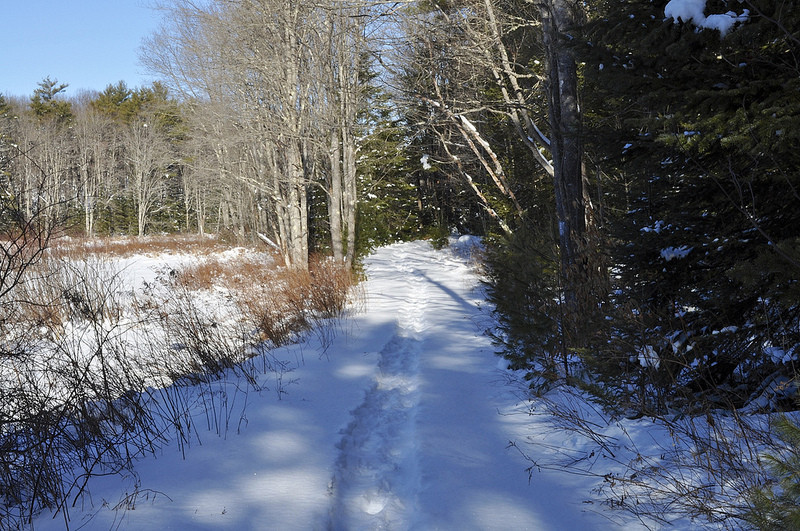 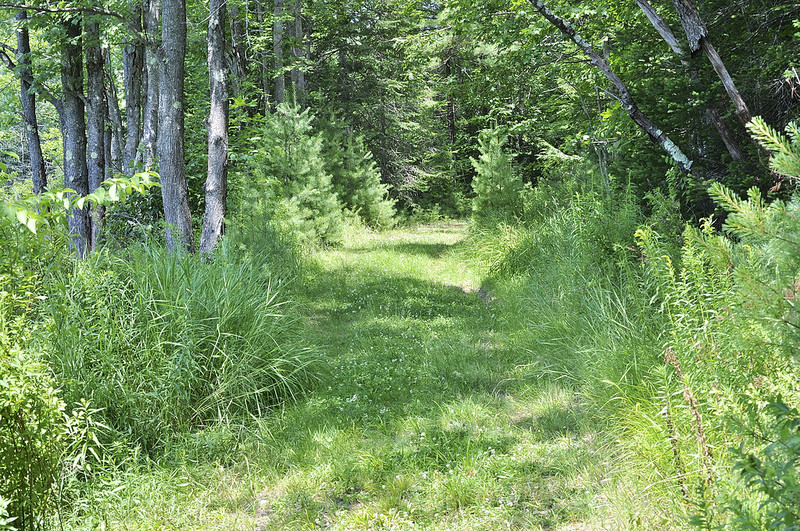 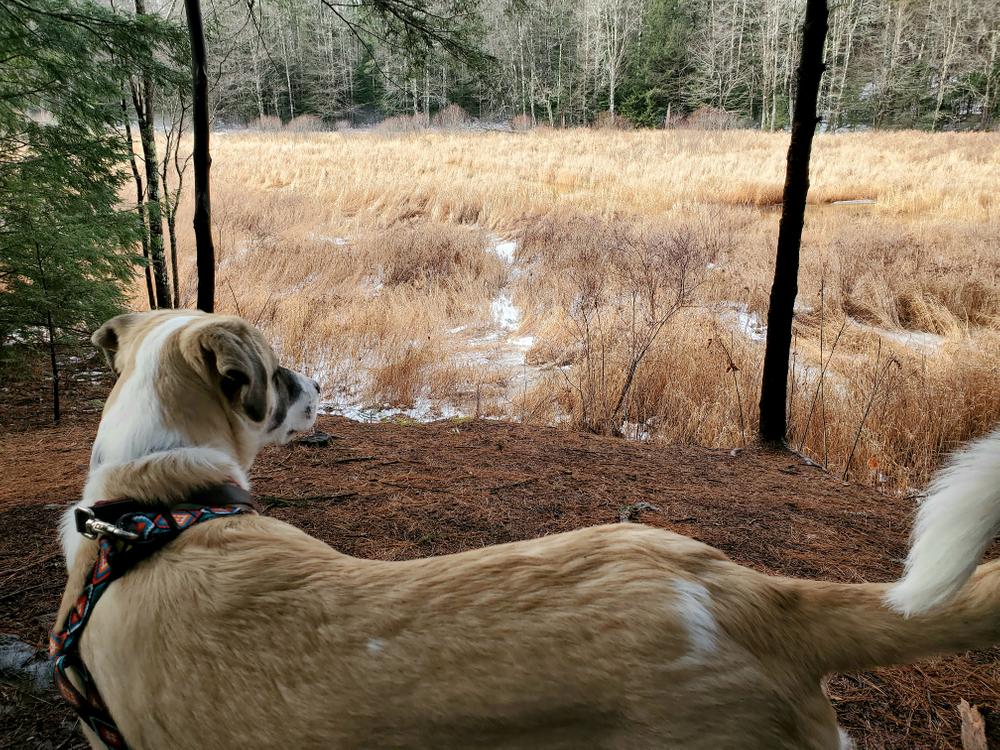 Blue Heron Trail, marked by blue blazes, begins at the trail head at the parking lot and runs through a corridor bounded by private land. It then passes through mixed mature woodlands and down a slope to a portion of the marsh at the site of an abandoned beaver lodge. The trail then crosses a series of plank bridges, then through the woods to the location of the first resting bench overlooking the marsh. You will then walk along an established game trail where it intersects a tote road. A short hike down this wood tote trail alongside the marsh will bring you to the bridge over Stackpole Creek. This bridge was built in 2007 by a crew from The Appalachian Mountain Club from funds provided by Saco Bay Trails. Here you have the choice of hiking to the end of Blue Heron Trail, or crossing the bridge to access Beaver Path along the west side of the stream or Big Pine Trail which begins at the right after crossing the bridge. If you elect to stay on Blue Heron Trail, it shortly rises up a slope to the edge of a field. The trail then runs along a wooded ridge where deer, moose and coyote sightings have been quite frequent. The trail then descends the ridge back to the stream. The walk along this section to the end of the trail is a particularly cool and pleasant part of the trail with large shading trees, mosses and ferns. Another resting bench is located at the end of the trail overlooking a nice riffle and pool in the stream. Eventually, this trail will loop back by a different route, but for now you will retrace your steps to the bridge and the beginning of the trails on the other side of the stream.

The Big Pine Trail, marked by green blazes, is aptly named for the large white pine tree by the bridge. Most of the largest trees in Horton Woods are about 150-170 years of age, indicating that all this land was originally pastureland, probably for sheep and growing hay. The old stone walls along the ridges above the marsh were likely piled with brush to prevent sheep and cattle from getting into the marsh, although in the drier summer months the livestock probably grazed in the marsh. The Big Pine Trail crosses over a series of bog bridges then up a slope and through a stand of mature hemlock, balsam fir and white pine trees. The trail then meanders along and down through some wet bottom land. A very small heath bog is just out of sight to the left of the trail. A series of plank bridges will guide you through this section until you reach the start of Red Maple Trail.

The Red Maple trail, marked by red blazes, is named for the largest red maple you will likely ever see. To visit the tree, the trail climbs a gentle slope through the woods to the edge of an old field bordered by a barbed wire fence. The land on the other side of the fence is private. A short walk along the field and fence will lead back into the woods where you will soon come upon this very large red maple. You may wish to take a picture of it with your companions so that you can impress your children and friends. Note also some very large old boundary white pines in this area. “Boundary” because they were probably trees left to mark the edge of a neighbor’s pasture. In recent years, some of these trees have been damaged by high winds and are probably near the end of their life. The trail then descends through the woods to the edge of Stackpole Creek. If you look across the creek you will see the resting bench on Blue Heron trail. A short walk will bring you to the start of Beaver Trail, marked by brown blazes. This trail is a very pleasant walk along the brook and back to the bridge. Along the way there is a memorial bench overlooking the creek. After you re-cross the bridge on the way back to the parking lot, you will come upon Woodcock trail marked by yellow blazes. This trail provides a shortcut and easier walk back to the lot. It intersects Blue Heron trail near the trailhead. Just before entering Woodcock Trail, on the right you will notice a group of large dead hemlock snags. Several years ago one of these trees was struck by lightning. Apparently the whole group was killed because they were growing on rock ledge and the charge of electricity was transmitted through roots. Interestingly only the hemlocks were affected. Several of the hemlocks close to the trail were cut down to avoid accidents from falling limbs.

Due to the fragility of these natural systems, please do not litter or remove any plants or flowers. The preserve is surrounded by private property. Please respect that and stay on the marked trails and other delineated public areas. Be aware that many animals are common throughout the preserve, so it is important to keep your dog on a lead. In addition please use poop bags. The trails are primitive with many rocks, exposed roots and wet places, so proper hiking boots are recommended. In winter, the trail system can be hiked on snowshoes.

The trails are built and maintained by volunteers and members of Saco Bay Trails. This trail system is a work in progress. Eventually all the important habitats and interesting vistas and locales will be transected or bordered by a trail. Bird watching and photography are particularly rewarding, so come prepared with camera and/or binoculars.

In spring, summer, and fall, ticks and other biting insects may be plentiful. Visitors should take precautions to avoid these, especially ticks and possible exposure to Lyme disease. 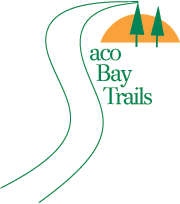 Dispose of Waste Properly
Wash your dishes at least 200 feet away from water sources, use biodegradable soap sparingly, and scatter the dishwater.
Trail Map
Legend
Hide All
Directions

From Main Street in Saco, travel west on North Street (which becomes ME Route 112/Buxton Road). Follow this for 5.9 miles. Turn left onto a dirt driveway at 464 Buxton Road. Turn right into a dirt parking lot and you’ll see the trailhead kiosk.

Click on a parking icon to get custom directions
Comments (5)
Please Log In or Create Account to add comments.
iceflame
Just want to let everyone know the bridge has been replaced. I went a few days ago, and the sawdust was still settling.
sylvia
If you walk on the lower log you can use the upper log for balance most of the way across. Feels safer.
hikerlisa
Right now, there are two large logs crossing Stackpole Creek. It's crossable for a steady person.
dprotaganist
Fun fact about the bridge shown in the photo; it's collapsed. So bear that in mind if you want to come by. Otherwise this trail is as wonderful as ever.
hylander
Nice network and a great trail for dogs with lots of places for them to swim and drink.
Services
Map View Add a Service
These awesome businesses support our goal of connecting people to outdoor adventures in Maine!
Hang Tight!
Nearby services are loading
No Services Found
Find Services
Photos