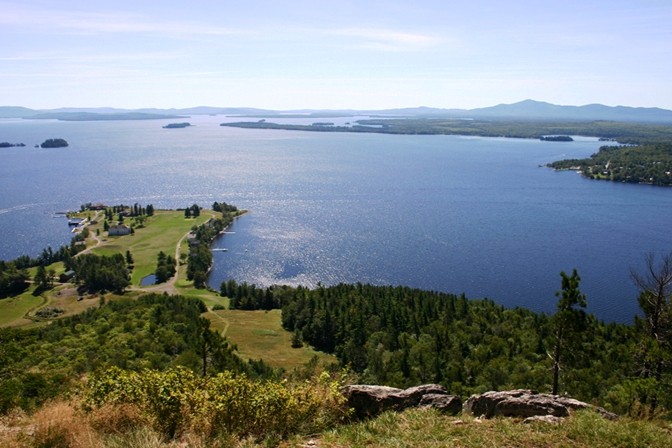 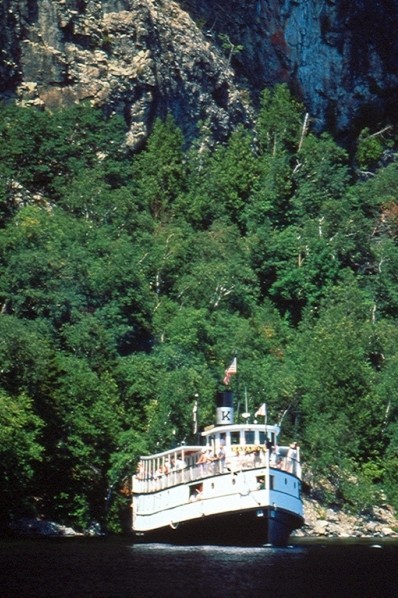 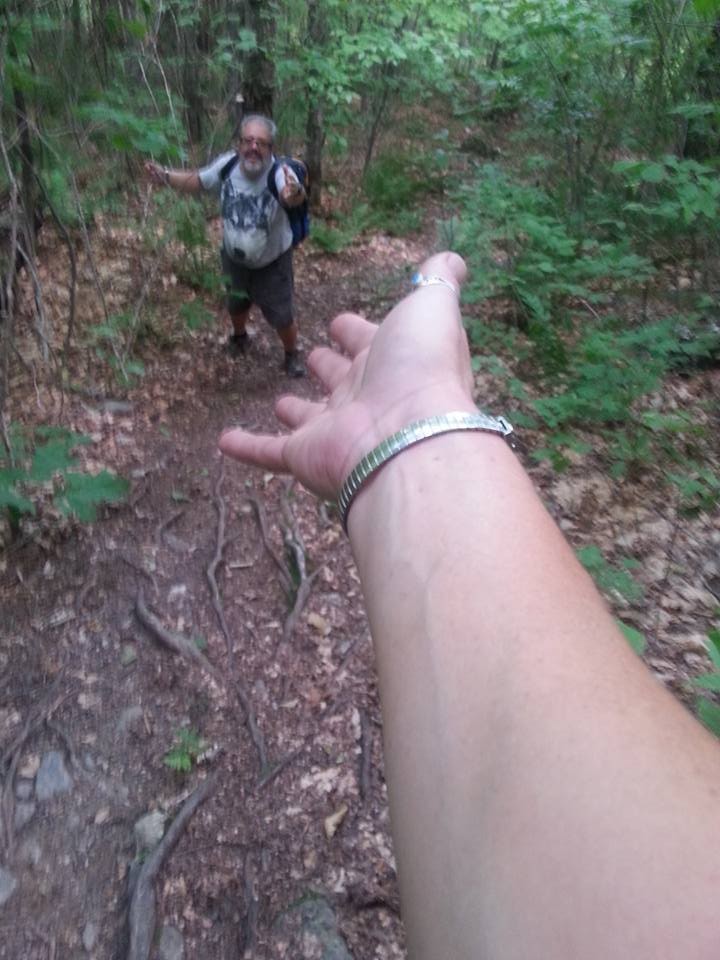 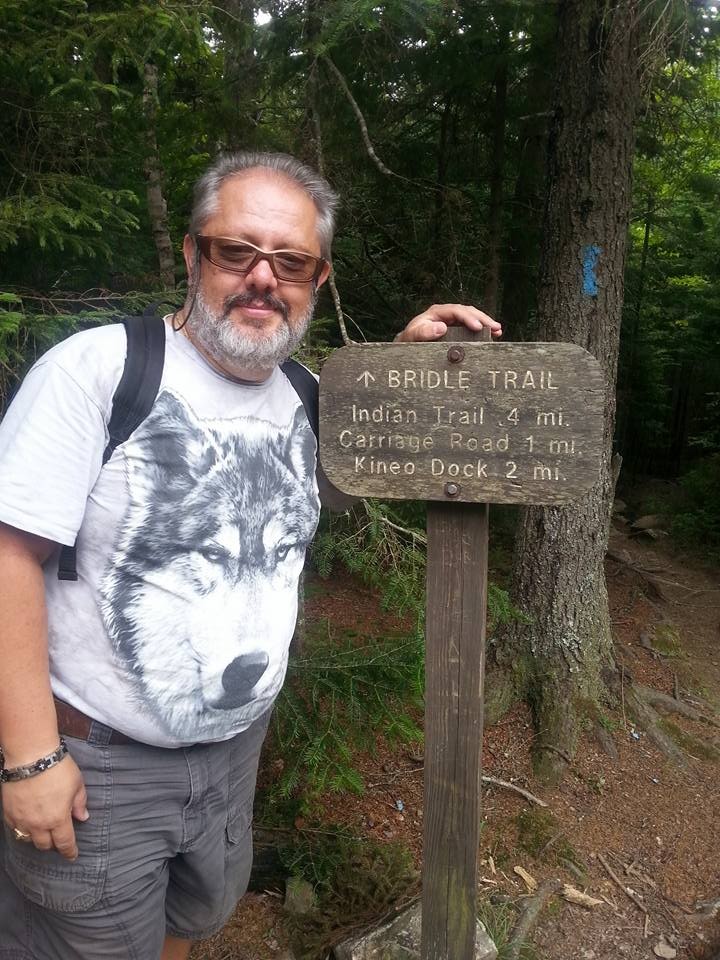 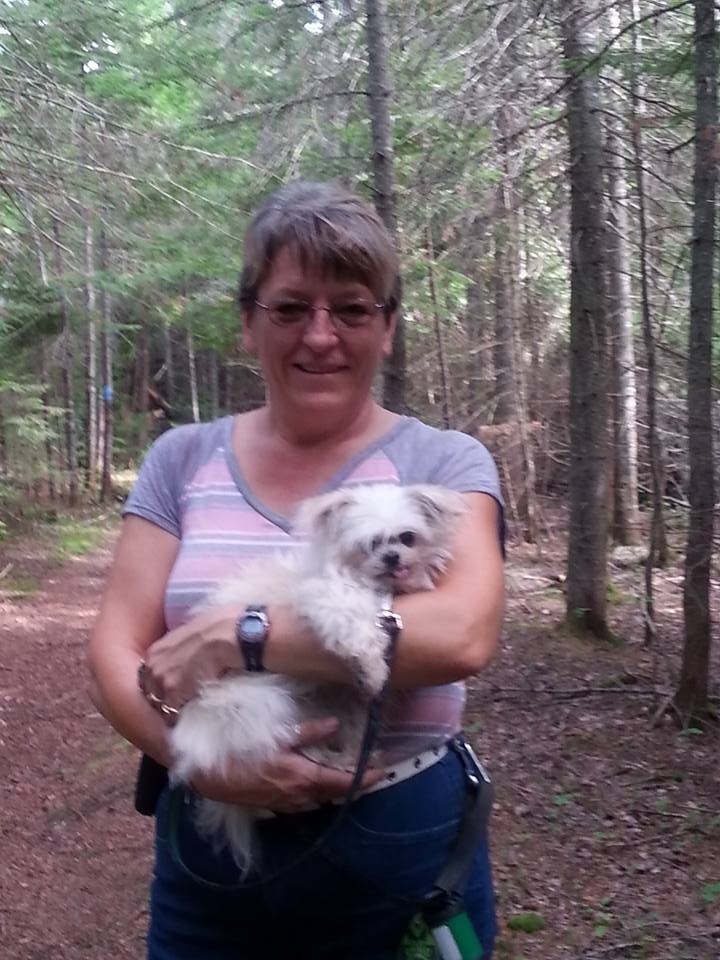 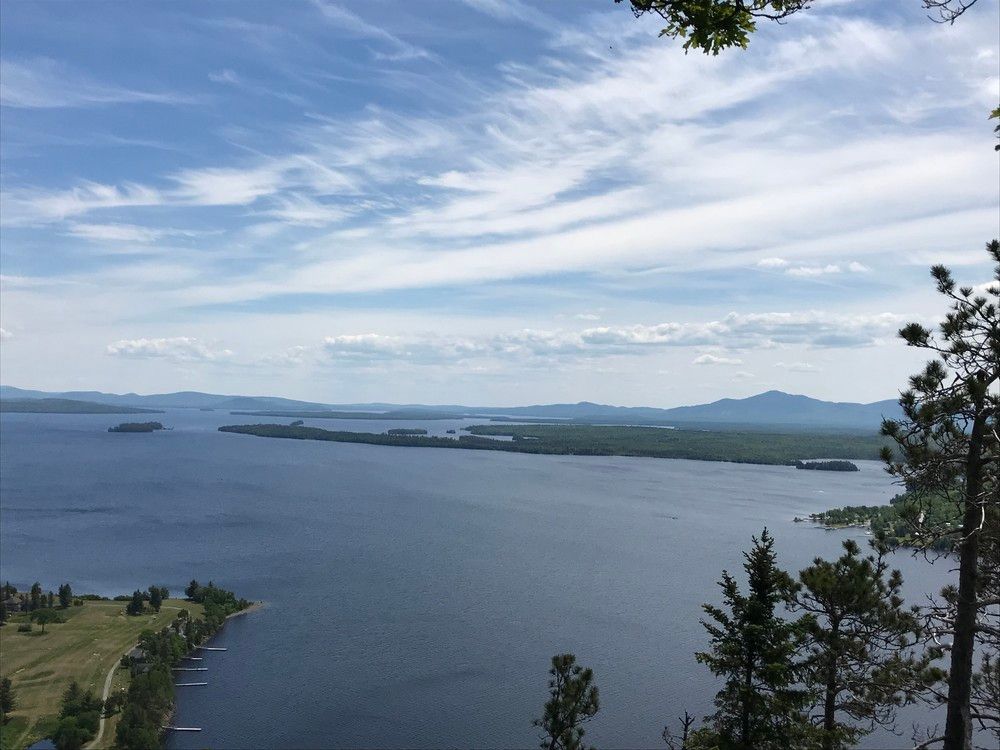 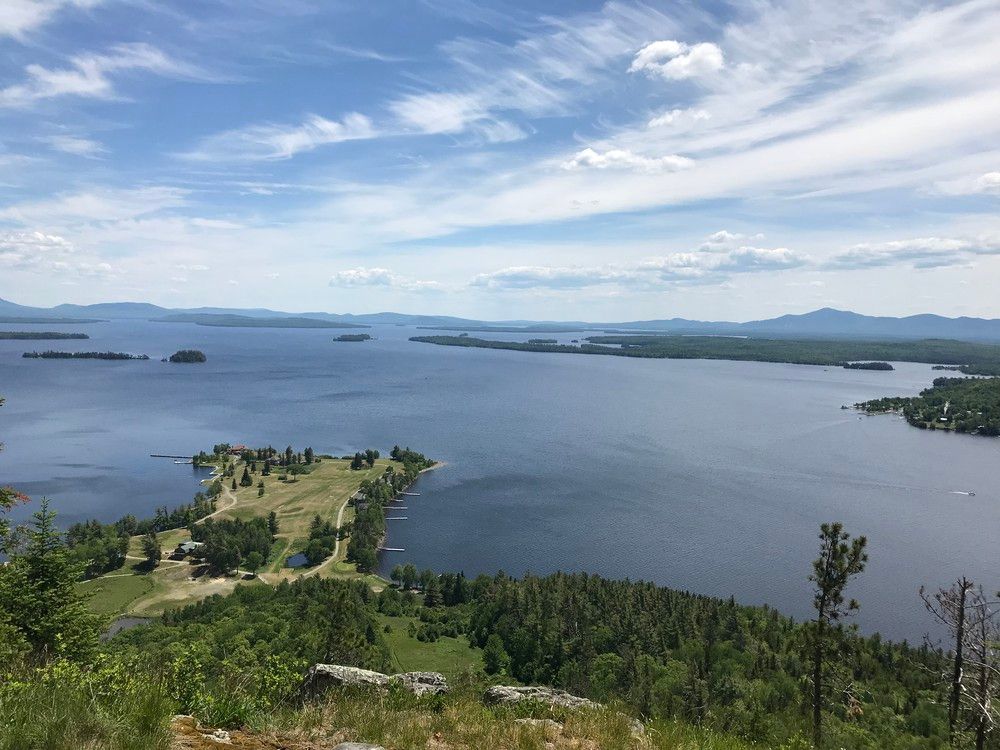 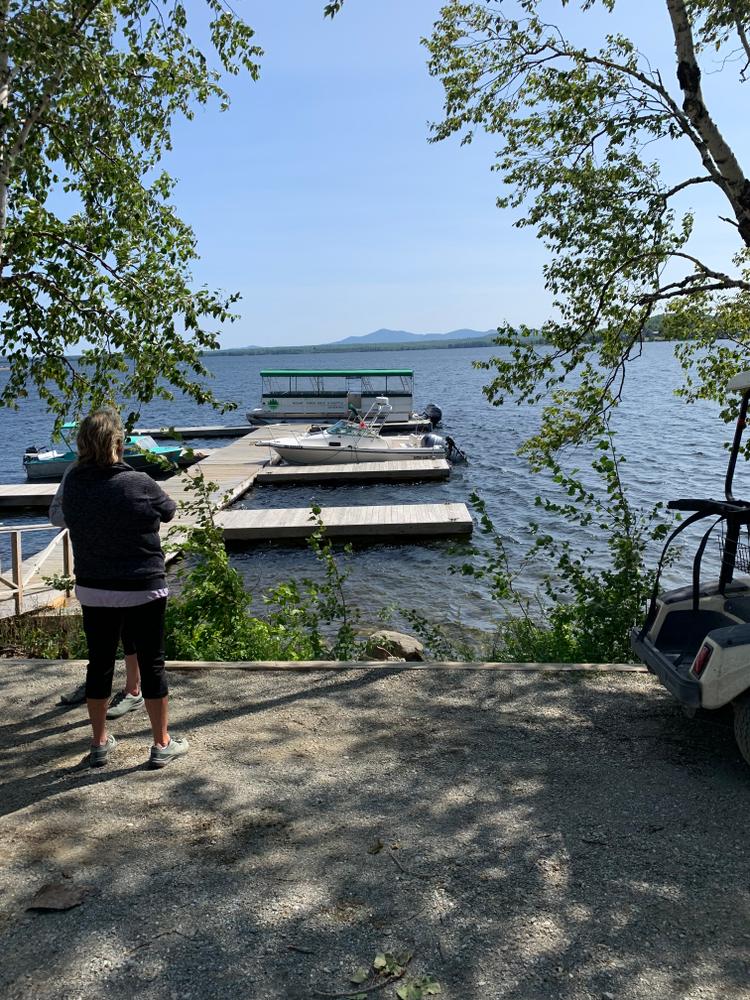 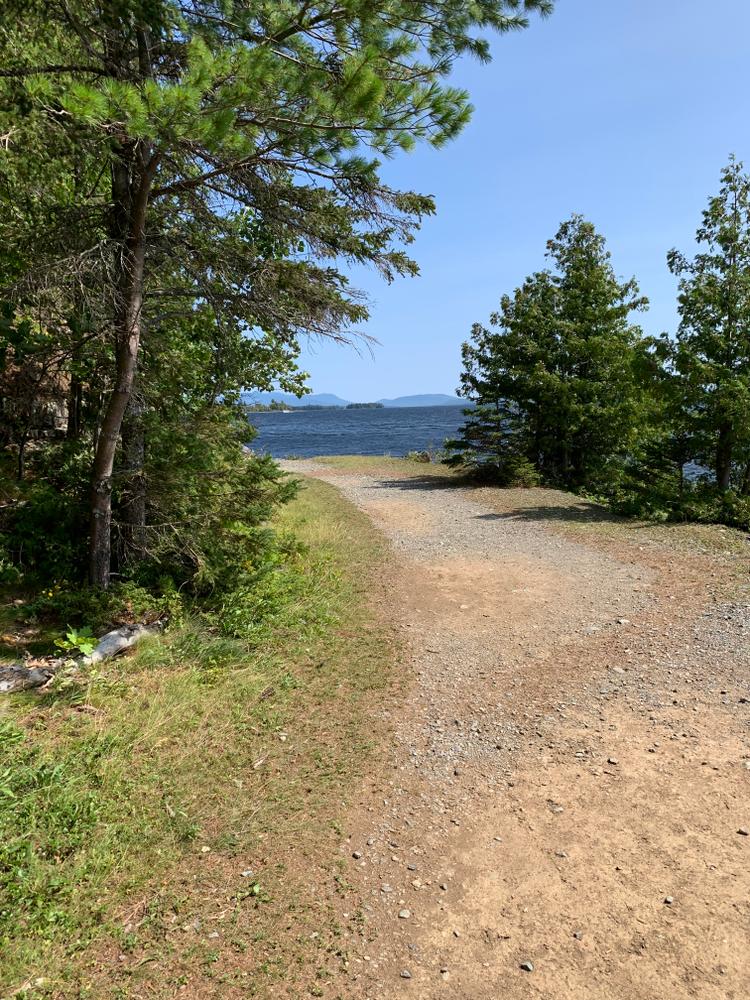 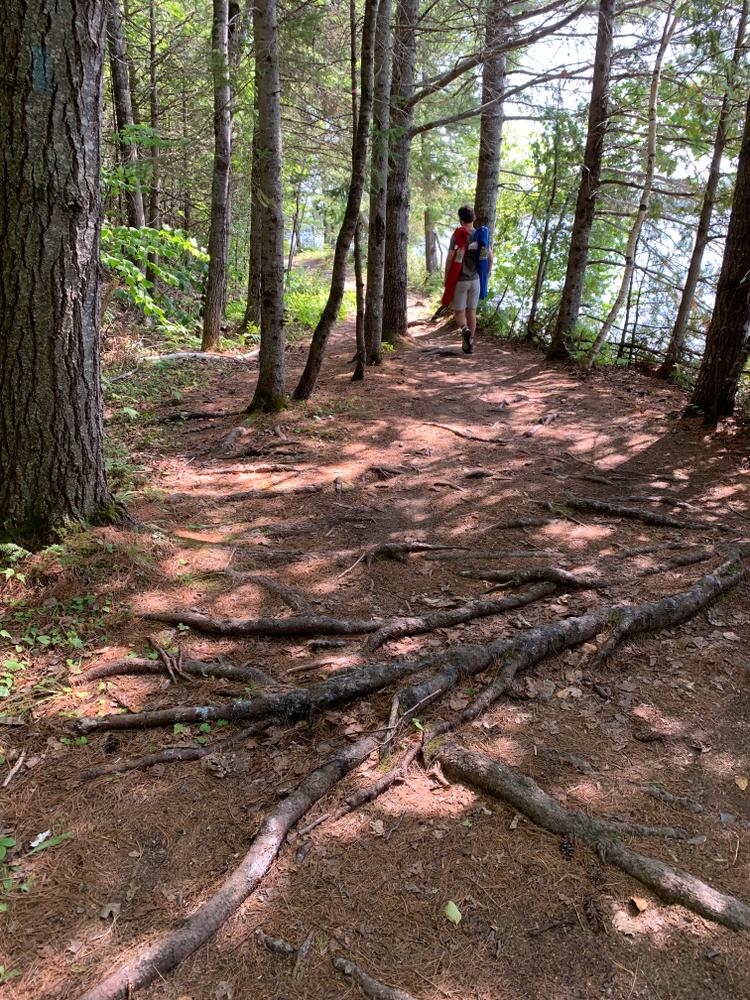 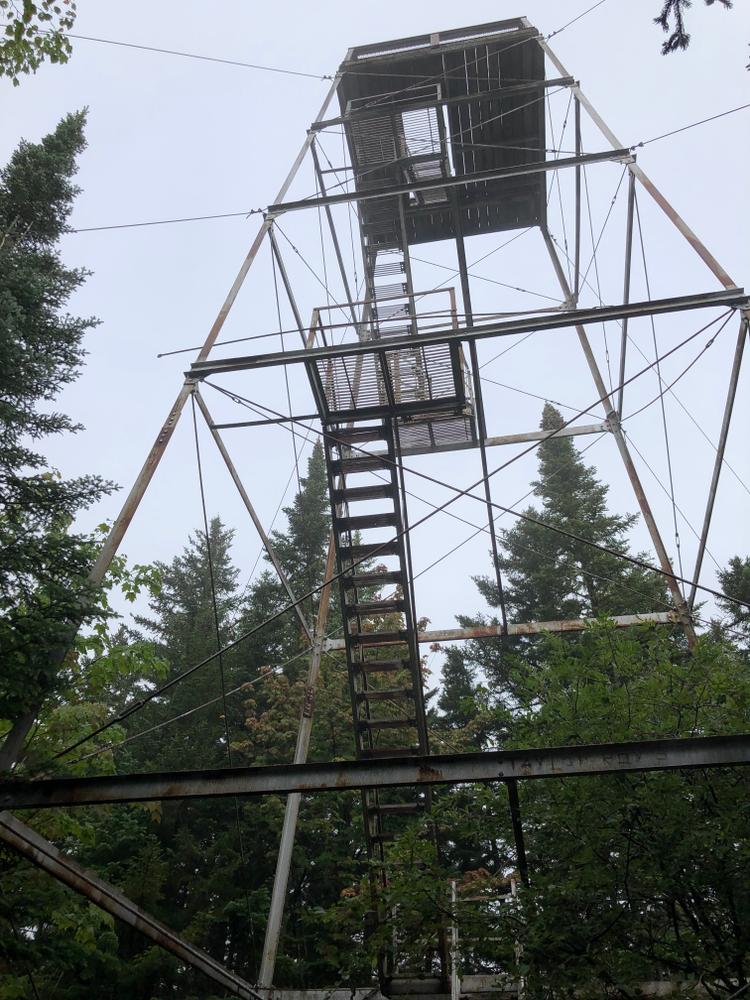 Mount Kineo has gentle slopes to the northwest and steep southeast faces shaped by a mile-thick ice sheet that moved across the region from northwest to southeast. The trails on Mount Kineo highlight the results of this glacial movement which occurred between 18,000 and 12,000 years ago.

Indian Trail (0.9 miles, moderate): climbs steeply along open ledge, making it the shortest but most strenuous route to the summit and fire tower. While more challenging, The Indian Trail also provides the best views of any trail.

Bridle Trail (1.1 miles, easy): is the original fire warden trail and provides a less steep route to the summit for hikers. It begins 0.3 miles along the Carriage Trail, traversing through stands of maple and birch before converging with the Indian Trail just shy of the summit.

North Trail (1.9 miles, moderate): offers a view of the eastern peninsula and when combined with the Carriage Trail, the longest hike to the summit of Mount Kineo. From Hardscrabble Point, the North Trail winds through the low level mixed hardwood forest and then rises more steeply up Mount Kineo's southeastern cliffs.

Eventually, all trails lead to the summit, which has a converted fire tower, used until about 1960 by the Maine Forest Service. From the summit, hikers can indulge in 360-degree views: Little Kineo, Big and Little Spencer Mountains in the northeast; the Lily Bay Mountains in the southeast; Big Moose in the south; the peak of Coburn in the southwest and Boundary Bald Mountain in the west. Of course, all around Kineo is the magnificent expanse of Moosehead Lake.

In addition to the breathtaking views offered by the summit of Mount Kineo, the peninsula is permeated with historical and natural significance. The name Kineo derives from a Wabanaki warrior of legendary power, Kinneho. The geological attributes of Mount Kineo also provided utilitarian purposes for original inhabitants. Native Americans utilized the flint-like felsite and rhyolite from Mount Kineo to craft stone tools. Today Mount Kineo is peregrine falcon territory. After near extinction in the 1960s, the first wild pair of peregrine falcons returned to nest on the cliffs of Mount Kineo in 1987.

When traveling to Mount Kineo via the boat shuttle in Rockwood, confirm departure times before hiking and gauge plans accordingly. Moosehead Lake water is cold and winds can arise suddenly and create dangerous conditions for boats. Children 10 years of age and under must, by law, wear a Type I, II, or III PFD while on board all watercraft. All boaters should wear a PFD at all times in small boats; notify someone of your intended route and time of return; and monitor conditions carefully (particularly when crossing open waters, including the crossing to Mount Kineo). Exercise caution near cliffs, particularly in damp and slippery conditions.

This trail passes through a property that was acquired in part with funds from the Land for Maine’s Future program. For more information about the LMF program and the places it has helped to protect, please visit the LMF webpage.

Visit Maine Bureau of Parks and Lands online for more information and a detailed trail guide or contact:

Be Considerate of Other Visitors
Respect other trail users and be courteous when passing.
Trail Map
Legend
Hide All

Mount Kineo is accessible by water only, with the nearest public boat launch site in Rockwood. Take ME Routes 15/6 through Greenville (also known as the Rockwood Road). Rockwood is 15 miles northwest of Greenville. Turn right on a road marked with signs for the Rockwood town landing and docks. A commercial boat shuttle (fee charged) to Mount Kineo leaves routinely from Rockwood in summer months. From the Mount Kineo docks, turn left and follow the shoreline path, an old carriage road, for 0.8 miles leading past private property to the State lands. Bear right on the Indian Trail or left for the other trails.

Click on a parking icon to get custom directions
Comments (4)
Please Log In or Create Account to add comments.
mtb
Husband and I did the entire trail system. Took our 1 year old lab.
We are not avid hikers.
The north trail is not for first timers. It was definitely more than moderate.
Trail markers fading easy to get off trail steep difficult footing.
Need some warning for this trail that definitely is a challenge!
boat
My wife and I got the early boat over today and hiked the Indian Trail up and the Bridal Trail down. Indian was a little steep but we took our time ( both of us over 65 yrs old!) and made it fine. Super views on Indian. Fire tower gives an awesome view. All woods on Bridal but fine coming down. Colors were at their peak (Oct 2). Well worth every step!
gregbem
Hiked this past weekend. Did the Indian Trail to the summit, which was steep but not too crazy (but I'm from Washington and am used to steep hikes). The peregrine falcons are beautiful to look at, but we were warned that people die hiking off trail to get closer to them, so we kept our distance. Nice fire lookout at the top that is sturdy and historic. Wish there was more information about it posted. Friends hiked back down the Bridle Trail, but I decided to solo the North Trail (heading down) and then wrap back using the Carriage Trail from Hardscrabble Point. All was really beautiful. Bugs only bad in a few places. Didn't see anyone else on the trail the entire time (we had gotten a pretty early start though--took the first ferry over). Glad I didn't run into any animals, though a lot of prints in the mud--maybe a type of large cat?
STEVEN DUPLESSIE
My wife and I just did the Carriage to the North Trail loop and I would advise that the north trail is very unused and unkept. Also once we got to the backside of the mountain it was as vertical as you can get without needing ropes. 1/2 way up we met some people coming down the backside to North Trail and they said that the Indian Trail was harder than expected and they had just done the knife at Katahdin.
Services
Map View Add a Service
These awesome businesses support our goal of connecting people to outdoor adventures in Maine!
Hang Tight!
Nearby services are loading
No Services Found
Find Services
Photos