Whether your interests are wildlife photography, fall foliage, moose-watching, listening to the songs of neotropical migrants, viewing the bald eagles and osprey, enjoying the antics of waterfowl broods, or simply discovering what's around the next bend, an expedition on these northern waterways is an ideal way to experience the Refuge and its wildlife.

The routes described below provide several options for half-day long paddling trips. Information for each route includes estimated minimum and maximum distances, depending on adherence to the shoreline, exploration of backwaters, and other options. Paddlers should be aware that weather in this region can change rapidly, and that Umbagog is a large and shallow lake that becomes very challenging in moderate to high winds. Be prepared for a wide range of weather conditions, keep a frequent eye to the sky, and avoid large expanses of open water if conditions are questionable or deteriorating. Many reservable tent sites are available along these routes and farther into the lake, allowing for multi-day explorations of the refuge, in both Maine and New Hampshire.

This route follows the southwest shoreline of Umbagog Lake, north from the public boat launch on Route 26 in Cambridge, NH. It is more exposed to wind than the river routes at the north end of the lake, and paddlers should be prepared for sudden changes in weather conditions. However, most of this shoreline is relatively accessible to roads, providing land-based options for returning in the event of sudden storms or high winds.

From the boat launch at the south end of Sargent Cove, you have the option of following the shoreline north or striking out for the small island at the tip of the point in Umbagog State Park. US Fish and Wildlife Service federal ownership begins just south of a Little Island, the long, narrow island that parallels the shore about a mile northwest of the point. Big Island, owned by The Society for the Protection of New Hampshire Forests, forms the shoreline to the northeast. While a number of lease-lot cabins dot the westerly shore of the north end of Thurston Cove, the eastern shore of this narrow inlet is undeveloped. Returning south, you have the option of following the west shore of Big Island, or winding through the narrow channel north of the island and continuing around its outer shoreline through the straight west of Tidswell Point. This option requires crossing at least a half-mile of open water at the southern end of Big Island en route back to the boat launch, and may be quite challenging in windy conditions. Watch for common loons and common mergansers on the water, and ospreys and bald eagles overhead. Voices heard from the upland include solitary and red-eyed vireos, hermit and Swainson's thrushes, and a number of warblers.

This route follows the Androscoggin River east from the public boat launch off NH-26 in Errol, NH, just upriver from the Errol Dam, and explores large backwaters north and south of the river. This is the shortest paddling route described, providing easy access to some of the most outstanding wildlife areas in the Refuge. (An alternative launch site is at the old steamboat landing on NH-16 north of Errol, which saves about 0.7 mciles of paddling each way.)

Please be careful to stay at least 400 ft away from the edge of the marsh vegetation in both Harper's and Sweat Meadows to avoid disturbing nesting birds during the breeding season (Early May - Mid-July).

Paddle upriver from the boat launch, optionally exploring an old river channel which forms a long, narrow backwater (logan) parallel to the south side of the river. Just after NH-16 leaves the north shore, Mile Long Pond is confluent with the river on the north. You can paddle up Mile Long Pond and enter Harper's Meadow through the channel to the east, or continue upriver about 0.8 miles and take a narrow channel to the left into the marsh.

Harper's Meadow includes an open water channel oriented roughly north-south (actually an extension of the Mile Long Pond), and an extensive area of marsh and bog between the channel and the Androscoggin and Magalloway Rivers. Moose often forage in the shallows, especially in early morning and evening, and several osprey nests are visible against the skyline to the east. Common loons, common goldeneye, as well as ring-necked, wood, and American black ducks may be encountered either swimming or overhead. American bittern, common snipe, and northern harrier all breed in the marsh, and are readily seen by patient and alert observers.

Returning to the Androscoggin, proceed upriver about 0.3 miles to the entrance to Sweat Meadows on the south shore. Bald eagles are now nesting in Sweat Meadows, which is seasonally closed to boaters during April-August. This area is sheltered in most wind conditions, providing excellent opportunities to observe wildlife. It is a short paddle (about 1.75 miles) back to the boat launch, although a strong northwest wind can make the first half-mile a good workout.

One popular route makes a loop into the lake from the Androscoggin River, north along the lower island, and into the central channel of Leonard Pond, just northwest of Eagle Island. The loop continues west through a narrow channel into the Magalloway River, then downstream to the Androscoggin.

If time permits, one can paddle northeast from the central channel to Leonard Marsh. This excellent wildlife area supports nesting waterfowl, ospreys, northern harriers, American bitterns, and migrating shorebirds in spring and late summer. Loop routes are possible using some combination of the lake and the east and west channels of Leonard Pond. While it is slightly less confusing to find the Androscoggin River than the Magalloway River for the return trip (go south on any channel until you can follow a major channel due west), those unfamiliar with the area should consult a map to successfully navigate around and out of the Leonard Pond complex.

Again, please stay at least 400 feet out from the edge of the marsh vegetation in Leonard Pond and Leonard Marsh to protect wildlife during the breeding season.

Please respect wildlife. Contrary to what many people might expect, canoeists and kayakers can easily disturb and harm the wildlife on the lake. Canoes and kayaks have the ability to go into the far reaches of coves and backwaters and ride close to the shore. Loons and many species of waterfowl, as well as eagles and osprey, use these areas for breeding and nesting. Canoeists and kayakers paddling close to nesting birds can flush the birds away from their nests, which leaves their eggs or young unprotected and vulnerable to predation. Repeated disturbances can cause adults to abandon their nests and eggs all together.

Lake Umbagog hosts a large number of waterfowl, including American black ducks, ring-necked ducks, hooded mergansers, common mergansers, common goldeneye and a high concentrations of nesting loons. Three pairs of bald eagles, as well as many osprey also nest on the Refuge. Part of what makes Lake Umbagog special are these birds and the habitats (coves, backwaters and marshes) that they live in. Please help keep these areas as undisturbed as possible during the nesting and breeding season.

When canoeing or kayaking during the nesting and breeding season (April - July):

Camping at Lake Umbagog is by reservation only. Shoreline tent sites, operated by the New Hampshire Division of Parks and Recreation, offer numerous options for camping. Pets are not allowed in overnight campsites in the Umbagog National Wildlife Refuge during bird breeding season (April - July).

The Errol NH Chamber of Commerce is also a source for lodging, private campground, canoe/kayak rentals, and guide service information, as well as local area amenities.

Plan Ahead and Prepare
Know how to choose and use your gear for each trip, factoring in the terrain and conditions.
Trail Map
Legend
Hide All

To access the launches on the upper Androscoggin River, travel toward Errol, NH on ME/NH-26. To launch just upriver from the Errol Dam, turn right onto North Mountain Pond Road (before the bridge over the river) and park in the lot on the right before the turn to the dam. To reach Steamer Diamond Boat Launch farther upriver, turn right onto NH-16/Dam Road just after the bridge over the river and park at the old steamboat landing in 1.6 miles on the right. 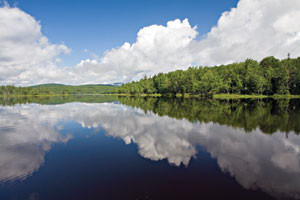 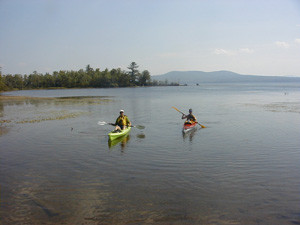 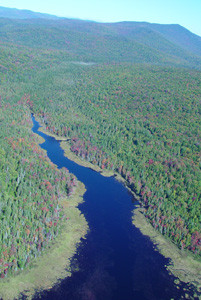 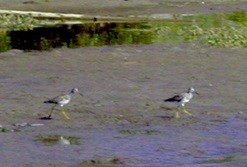