From Sea to Rivers: It's Alewife Migration Time!

Songbirds get a lot of credit for their impressively long migrations, especially when their trills and descants enliven fields and forests in spring and make awakening in the morning ever more pleasant. However, Maine also hosts another lesser-known species with a similarly impressive migration - the alewife! Alewives, a small herring-like fish, take to the waters rather than the skies to make their way to their breeding grounds. So many alewives migrate up some of Maine's rivers that it can look as though there isn't any room for anything else!

Keep reading to learn more about alewives and where you can view their migration!

Alewives are one of two species of River Herring (the other is Blueback Herring). They are an anadromous fish, meaning that they live their adult lives in the ocean, but come spring they migrate up freshwater rivers to spawn. Their native range stretches along the Atlantic coast of North America, from Labrador to South Carolina. They are also known as mulhaden, sawbacks, greybacks, golden shad, gaspereau (Atlantic Canada), and kyacks (Nova Scotia).

The unassuming alewife may not look like it can migrate hundreds of miles, but small can be mighty!

Alewives are a critical prey species for many larger fish off the Maine coast, including cod, haddock, salmon, tuna and trout. Additionally, they are a food source for many seabirds, marine mammals, and even land-based creatures such as fox and raccoons! During migration, they provide important nutrients to inland wildlife as well.

Because of their anadromous nature, alewives tie together the ocean and rivers and lakes in Maine, playing a vital role in keeping the ecosystems of Maine’s watersheds healthy. 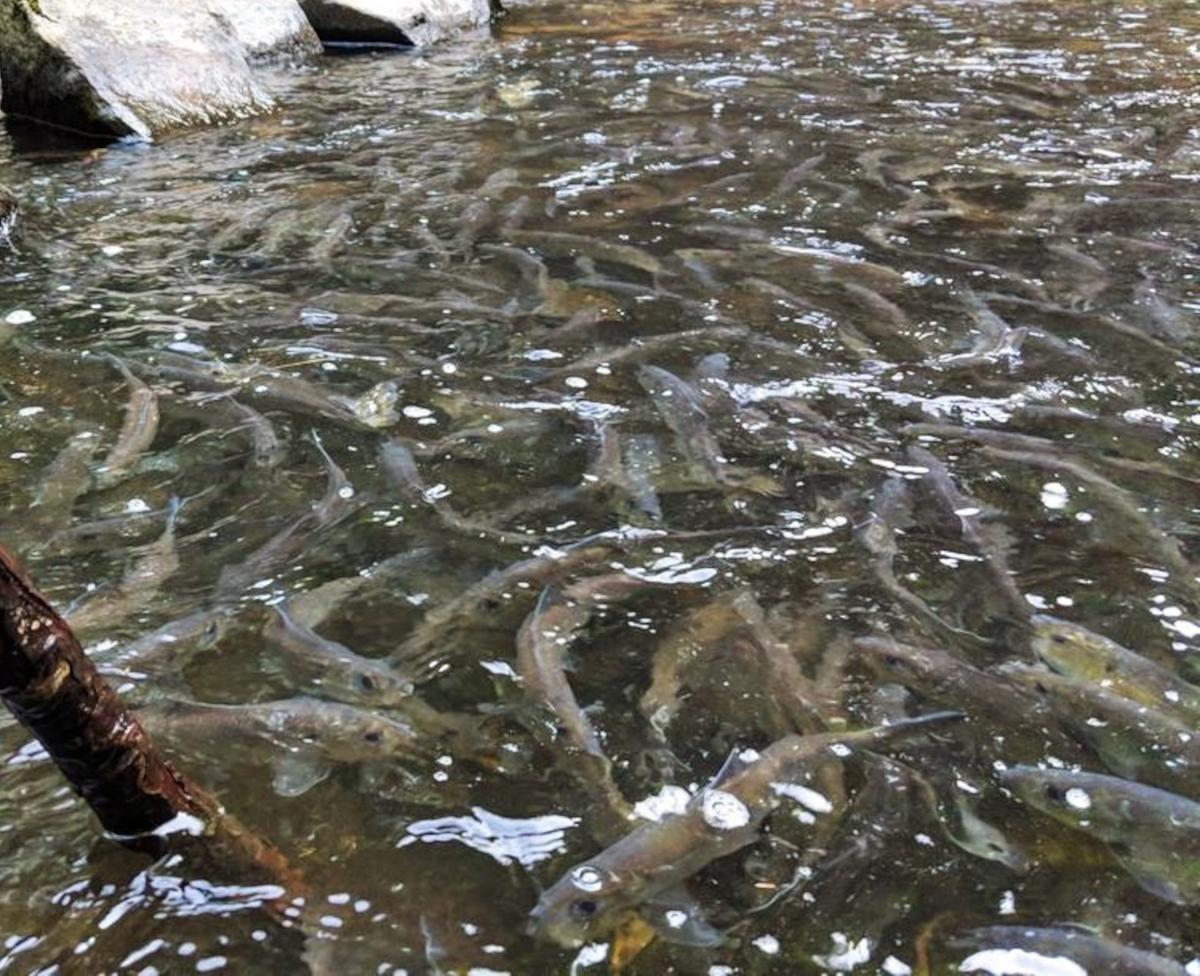 Alewives are thick as can be as they make their way up Mill Brook at the Mill Brook Preserve in Westbrook. (pc: Michael Hanson)

Alewives are also important to Maine’s fishing industry. As adults, they are the preferred bait for spring lobstering. Thirty-five Maine towns have commercial harvesting rights to alewives on 39 streams and rivers. Towns lease these fishing privileges to independent fishermen, in addition to providing a means to harvest this bait fish. Alewives are more important than ever now as bait, as the federal government has had to dramatically lower the allowable catch of other local bait fish, causing Maine lobstermen no choice but to import bait from out of state.

From Abundance to Decline

In the 1800s, alewives were incredibly abundant and people up and down Maine's coast fished for alewives to eat, both fresh and smoked and salted to store. But in the past 200 years, dams, pollution, and overfishing have led to a rapid decline in alewife populations. The good news is that alewives respond quite well to restoration efforts. Compared to other fish species, alewives happily utilize fishways and fish ladders, giving them a “step up” in migrating upriver to their traditional spawning grounds. Because of efforts to restore passage around dams, their populations are rebounding.

The name alewife is thought to have come from the fish's large front body, resembling the corpulant women tavern keepers of the middle ages, called "ale wives."

Alewives typically migrate from mid-May to mid-June, depending on water flow and temperature. There are numerous events being held across the state in the coming weeks to celebrate these miraculous and historically significant fish. Click on the event photos below to check out Alewife events on our calendar! 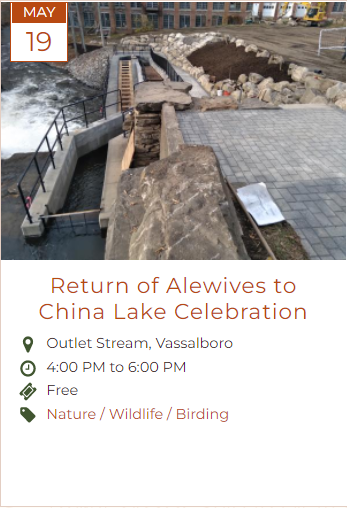 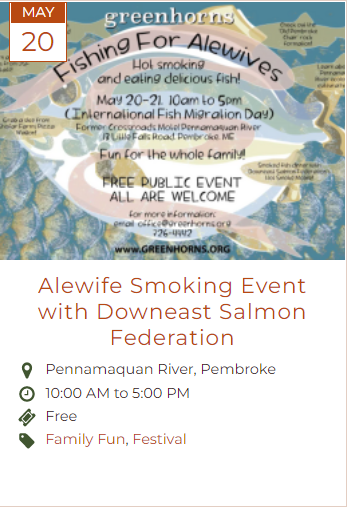 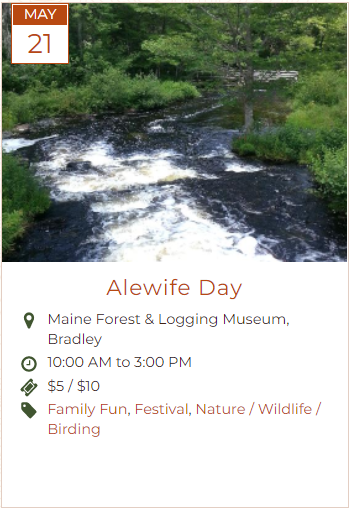 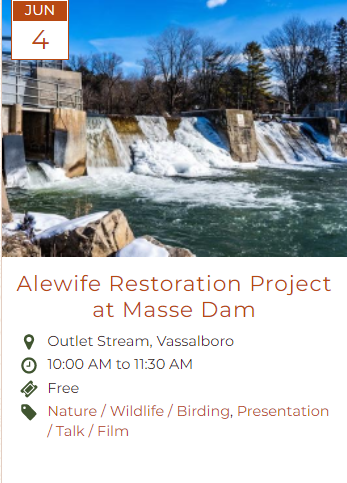 If you would like to see the alewife migration on your own time, there are plenty of trails from which you can observe this yearly spring occurrence. Here are four that we recommend checking out.

(Westbrook) Just minutes outside Portland, the trails at Presumpscot Regional Land Trust's Mill Brook Preserve travel along the pools and rapids of Mill Brook, offering great opportunities to observe the alewives on their journey from Casco Bay to Highland Lake. The trails are wooded and travel over sometimes hilly terrain. Good places to spot the alewives can be reached with a hike of under a mile from multiple trailheads; the north-south main trail is about 3 miles in length. 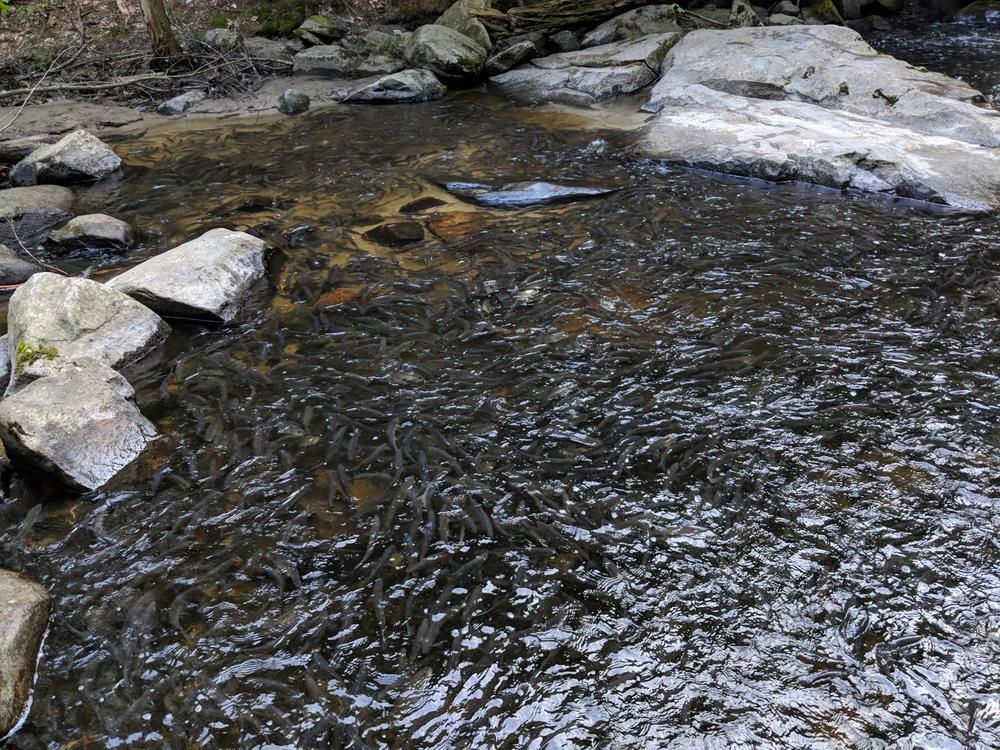 Alewives crowd together in a pool at the Mill Stream Preserve. (pc: Michael Hansen)

(Vasselboro) This conservation area, owned by the Kennebec Land Trust, features 3,800 feet of shoreline along the Seawards Mills Stream, an alewife migration route which was the location of four mills that utilized the stream's power on its 3-mile descent from Three Mile Pond to Webber Pond. The short 0.7 mile trail provides easy access to the stream, traveling along the waterway for much of its length. 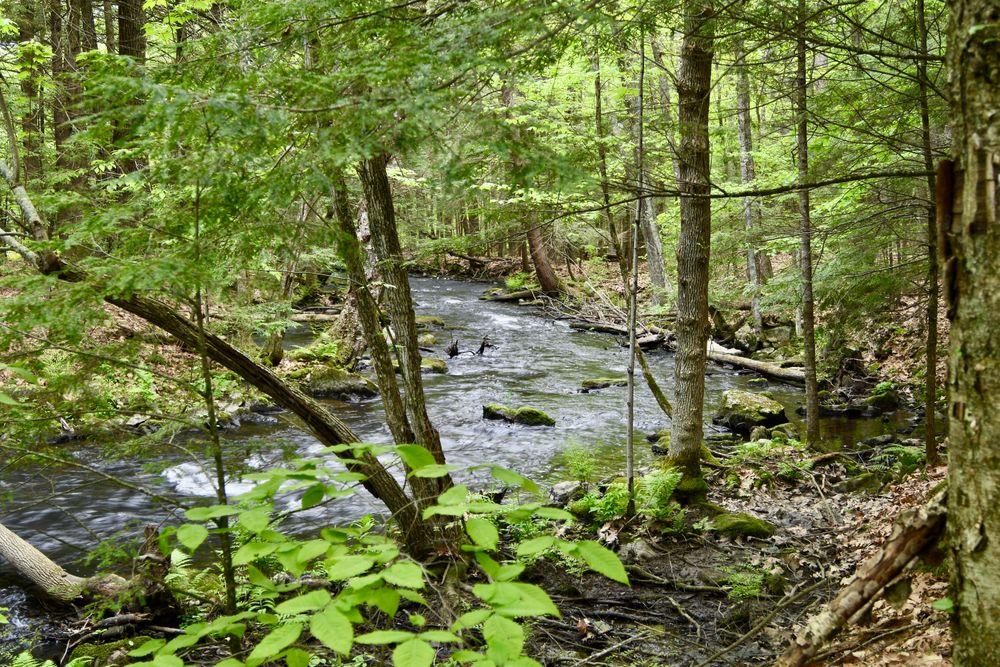 (Surry) Patten Stream is an important resource for alewives, which swim up the stream from the bay in the spring, seeking freshwater. A visit to the Blue Hill Heritage Trust property in the spring also gives you the chance to enjoy abundant spring ephemeral flowers and nesting songbirds. There are two loop options, the longer about a mile and a half, the shorter about half that; both loops bring you to the stream. 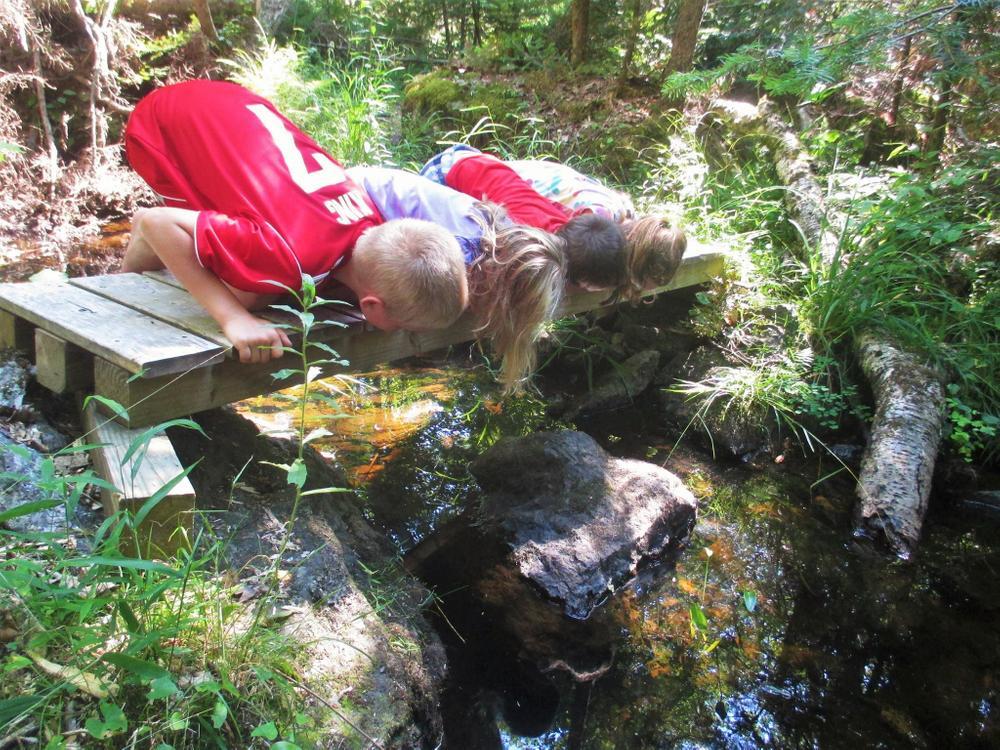 Looking at Patten Stream from a small bridge - there is always something interesting to see! (pc: Blue Hill Heritage Trust)

(Brooksville) A unique population of pygmy alewives passes by the Snow Natural Area, also owned by the Blue Hill Heritage Trust, on its way to spawning grounds in Walker Pond. If you time it right, you might be able to catch them fighting their way upstream at Bagaduce Falls, a tidal reversing falls just east of the Snow Natural Area. There is a boat landing along ME-175 by the falls where you can park your car, on the west side of the bridge over the Bagaduce River. 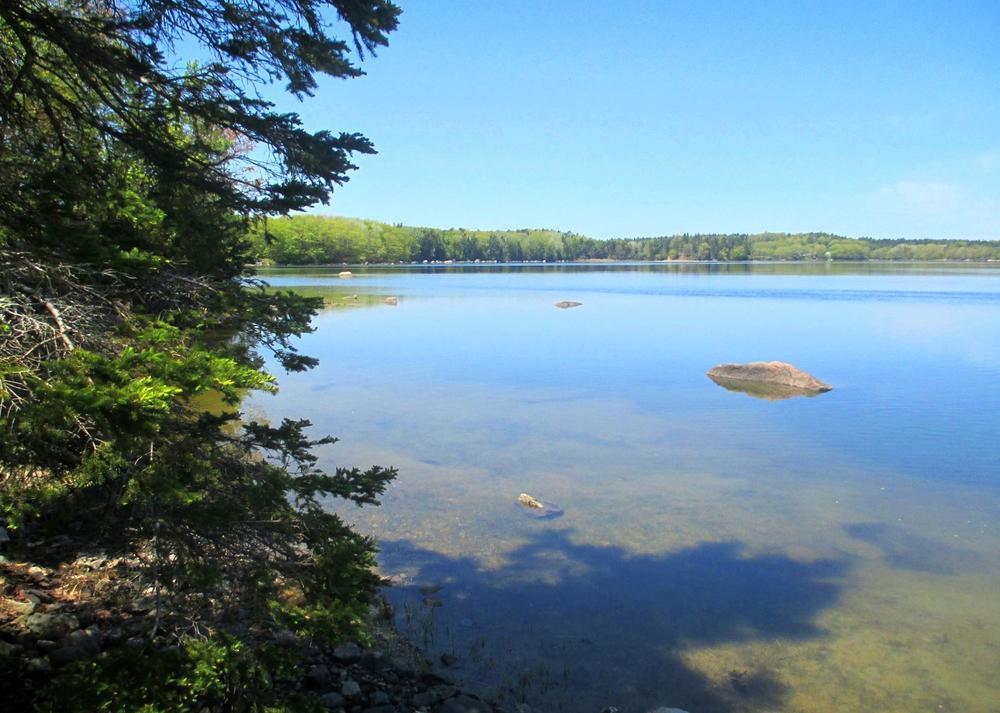 A view from Snow Natural Area shows that alewives aren't the only reason to visit! (pc: Blue Hill Heritage Trust) 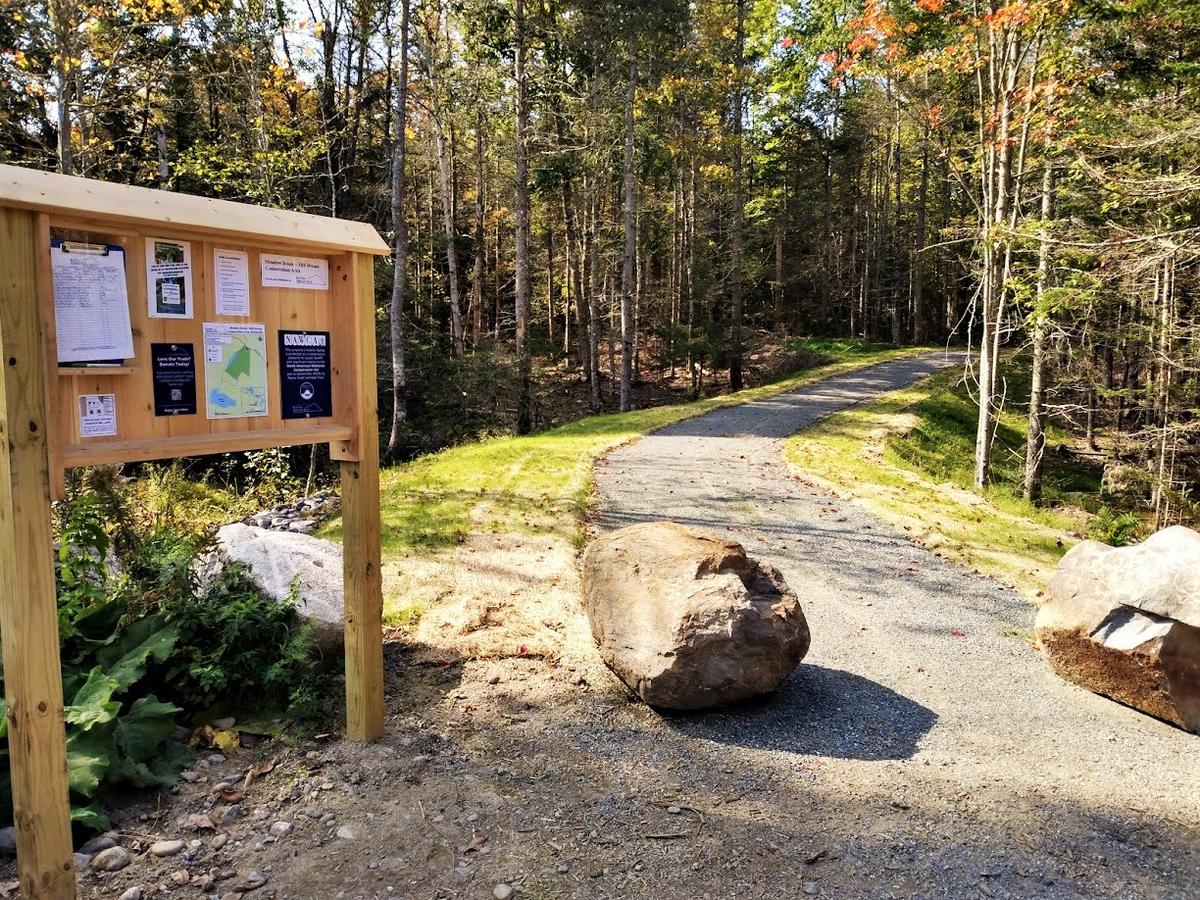 Check out these resources to learn even more about alewives in Maine:

Recent Articles
Enock's Adventures: Knight's Pond Preserve
How to Volunteer on Trails in Maine
Enock's Adventures: Harpswell Day One
Enock's Adventures: Maquoit Bay Conservation Land
Search Stories
Comments
Please Log In or Create Account to add comments.
PRINT STORY
SHARE THIS STORY
Join In on the Fun!
Log in or create an account below to unlock all the great features of Maine trail finder: keep track of trails you want to do, preserve memories of trails you’ve done, earn badges, and more!
Your log in attempt was not successful. Please try again.
Don't yet have an account?
Create Account
There was an issue with your submission. Please try again.
* Indicates required field
Already have an account? Login here
Enter your username, and we will send you a new, randomly generated password to your email account.
There was an issue with your submission. Please try again.
Login here