“Wintery Mix” - that pleasant sounding euphemism for the rain-sleet-snow-ice that so often falls on the Maine coast. It was such weather that drove this snow-lover to spontaneously drive 3 hours north on a frigid (below-zero temps forecasted) January weekend to ski into the unknown - a hut in Katahdin Woods Waters National Monument. 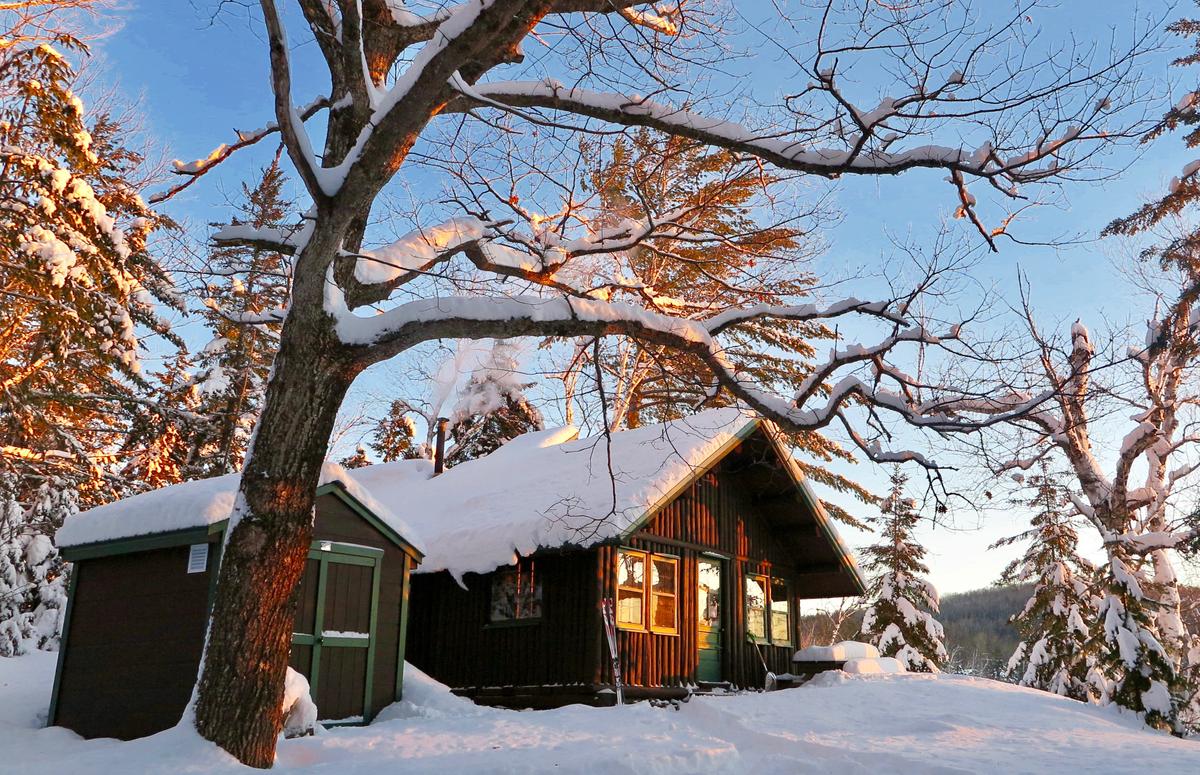 I arrived at the north gate at 2:30 in the afternoon - only 2 hours before sunset. But there was plenty of time to ski the 6+ miles to Haskell Hut. Even if I hadn’t made it before sunset, I had lots of warm gear and a good headlamp - not to mention a beautifully clear sky that would no doubt offer multitudes of starlight under which to ski. 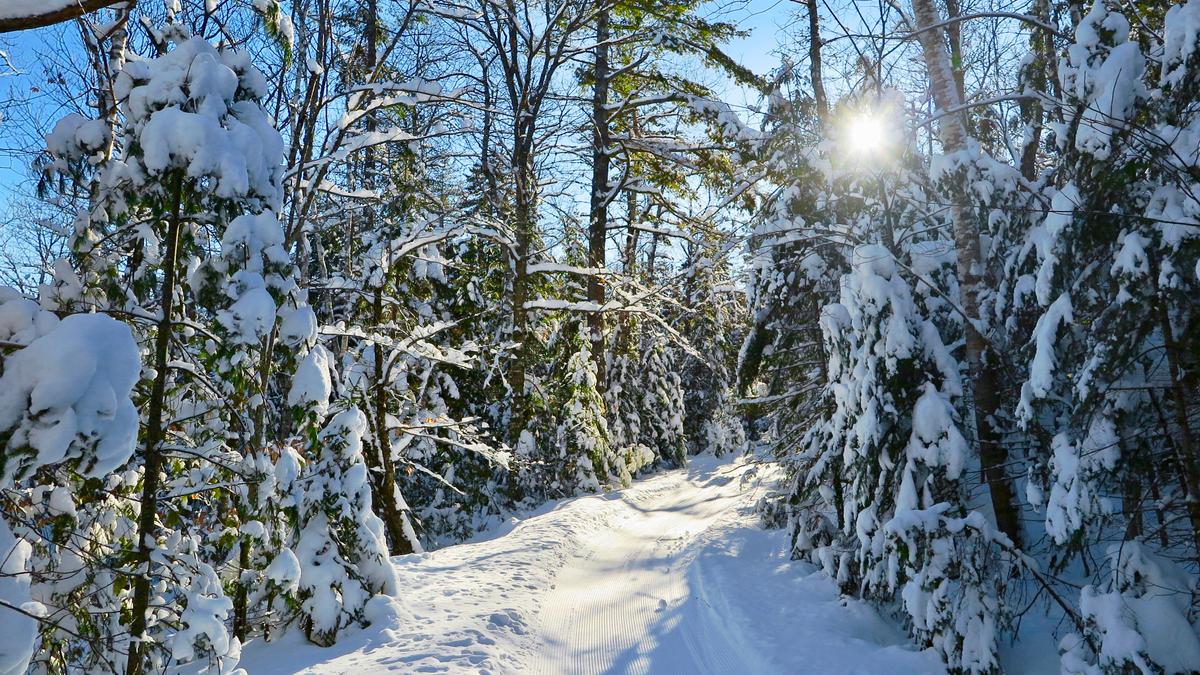 The first stretch of trail, on the Old River Road, followed the banks of the Penobscot River. It was relatively flat and easy going, and with the trees heaped with fresh snow, and the dazzling sunlight illuminating the snowy trail as well as the water smoothly flowing by, I was in a winter-wonderland-heaven. After about 2.25 miles, I came to a marsh on my right, and crossed a small bridge where the marsh emptied into the river. The marsh afforded a beautiful view across to the ridge of Bald Mountain. Just past the marsh I came to the Oxbow Road, which took me back up to the main trail (Messer Pond - Orin Falls Road). 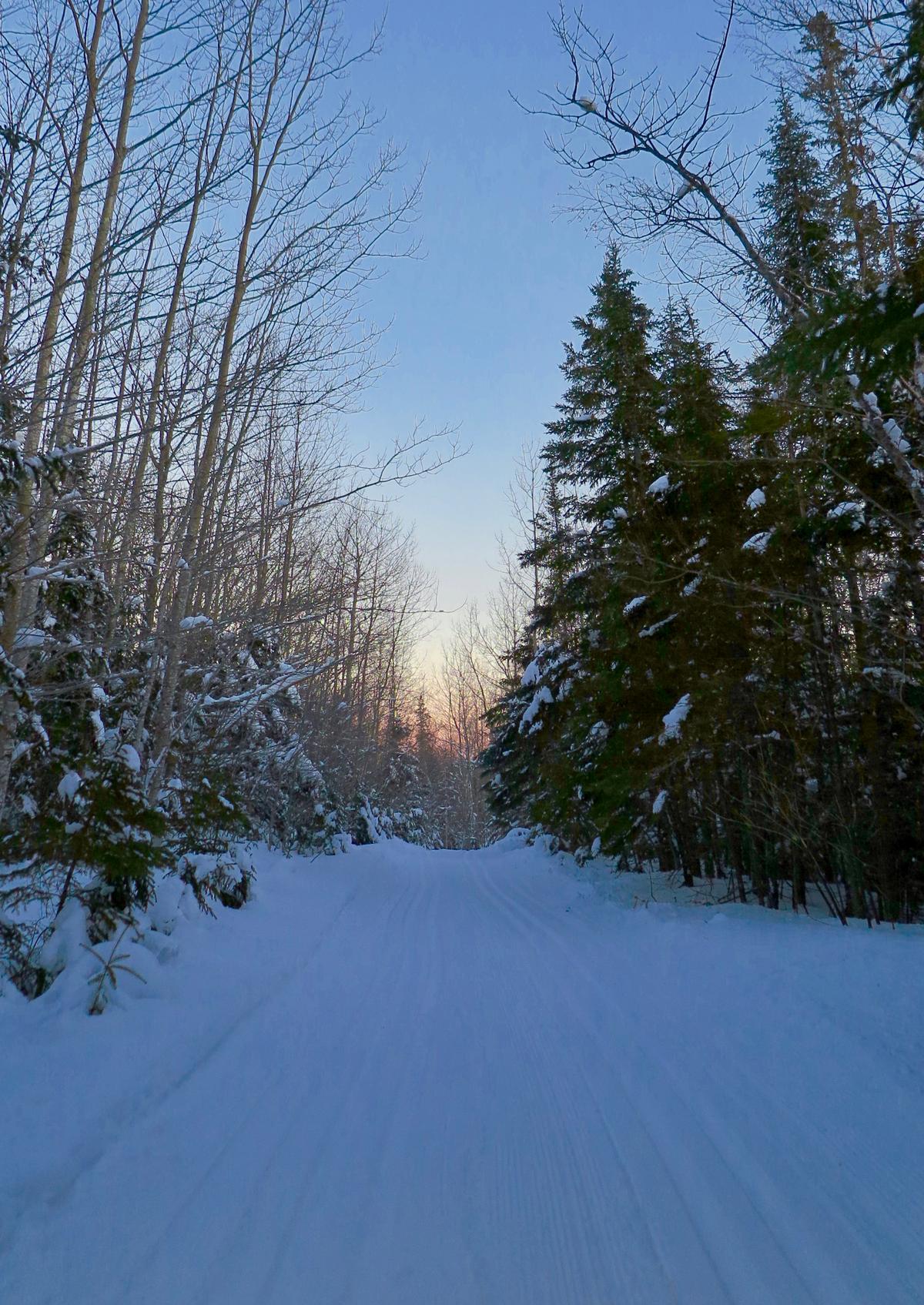 From this point to Haskell Gate, the trail traveled up and down over gentle grades, while dusk settled upon the landscape. The stark leafless trees were silhouetted by the purple sky glowing behind them. The patterns of the trees in the darkening dusk, the ever-changing light, the chill air stinging my exposed face, the shusch-shusch-shusch rhythm of my skis sliding across the snow the only sound insinuating itself into the silent evening - I was totally absorbed by being in that place, in that time. Pure magic.

Past Haskell Gate, the trail took a bend downhill into a spruce forest, the spruce boughs heaped thickly with recent snow. This was the final stretch before reaching the hut, to which I arrived while there was still some lingering light, though sunset was well past.

Having not stayed at Haskell Hut before, I wasn’t sure what sort of accommodations it would offer. I was pleasantly surprised by how substantial it was - very solidly enclosed, and well-provisioned with cooking pots and pans and dishes, and games, books, and puzzles, a propane stove, and even a rocking chair. 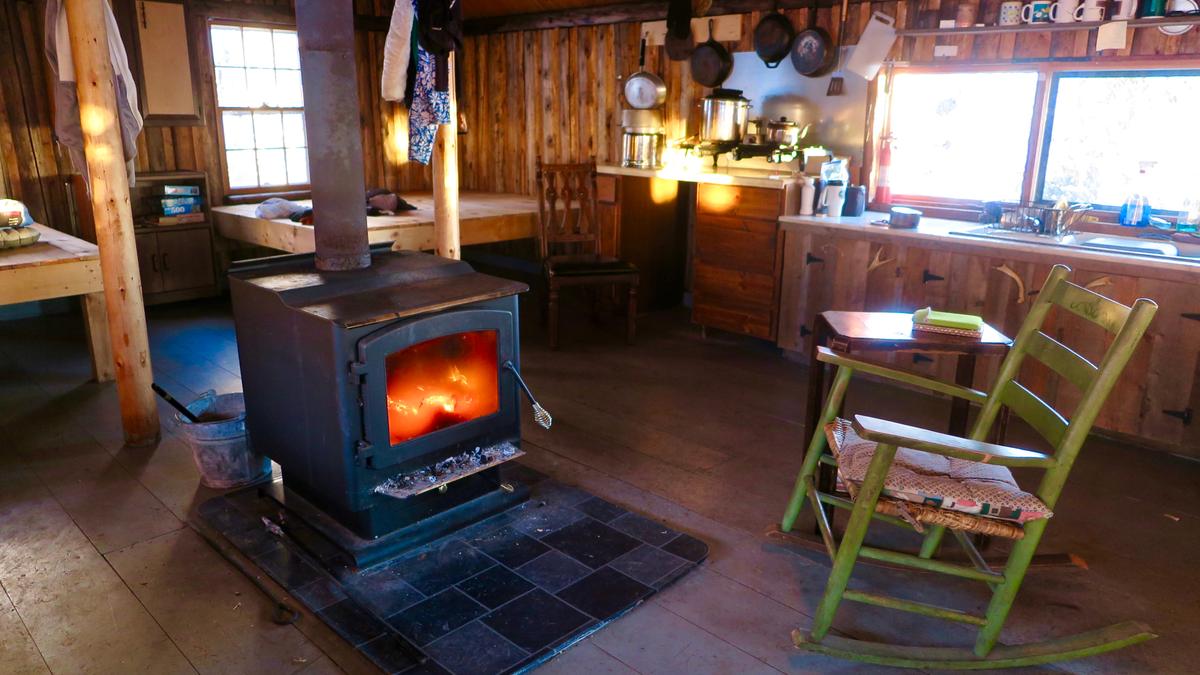 And, most importantly -- a workhorse of a wood stove. As soon as I arrived my priority was to kindle a fire, before I got chilled from my ski. I huddled in front of the stove and worked on thawing my toes while the interior temperature began its slow climb out of the single digits. It took about an hour before it was comfortable enough to change out of my sweaty ski clothes, and melt snow/heat water for dinner. By the time I went to sleep later, the hut was almost TOO hot!

The next morning I woke in the early hours, savoring the pre-dawn glow lighting the sky over Haskell Deadwater and shining its way through the windows. But to see the sun rise properly, still ensconced in my sleeping bag, I threw on some boots, hat and mittens, grabbed my camera, and headed out into the chilly morning.

Minus eight degrees according to the thermometer, but so still and serene - not a breath of wind, nor a murmur of sound to be heard. I watched the sun emerge and slowly light up the tree tops, the hut, and finally the snow beneath me. 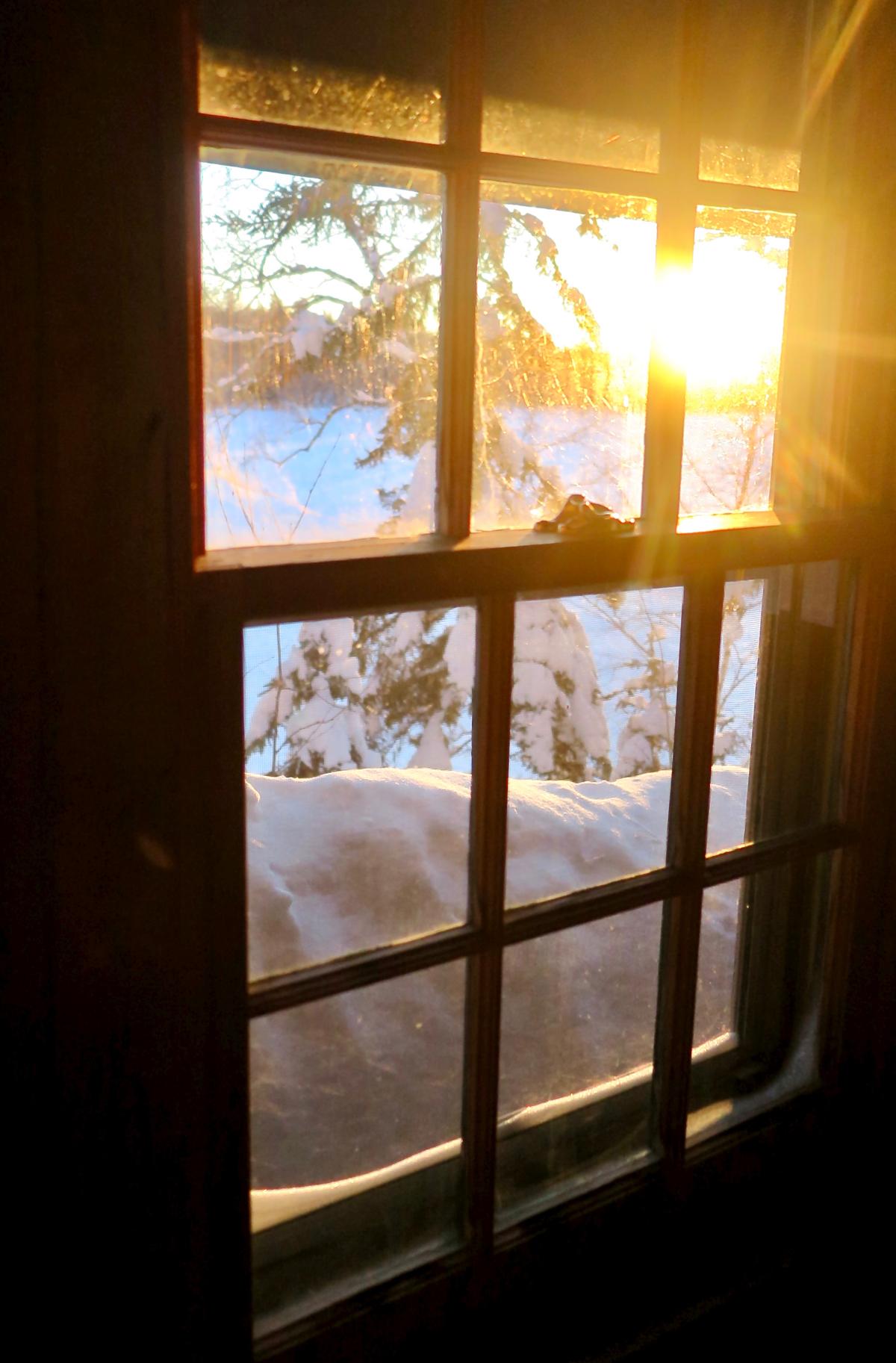 Before heading back out, I did some exploring further to the south. I found Haskell Rock Pitch a short three-quarters of a mile downstream, and enjoyed the falls cascading over the icy rocks. As I continued my explorations, I had to resort to placing hand-warmers in my boots. Not very comfortable, but necessary as I had lost all feeling in my toes, what with temperatures hovering around zero degrees, uninsulated ski-boots, and bad circulation. 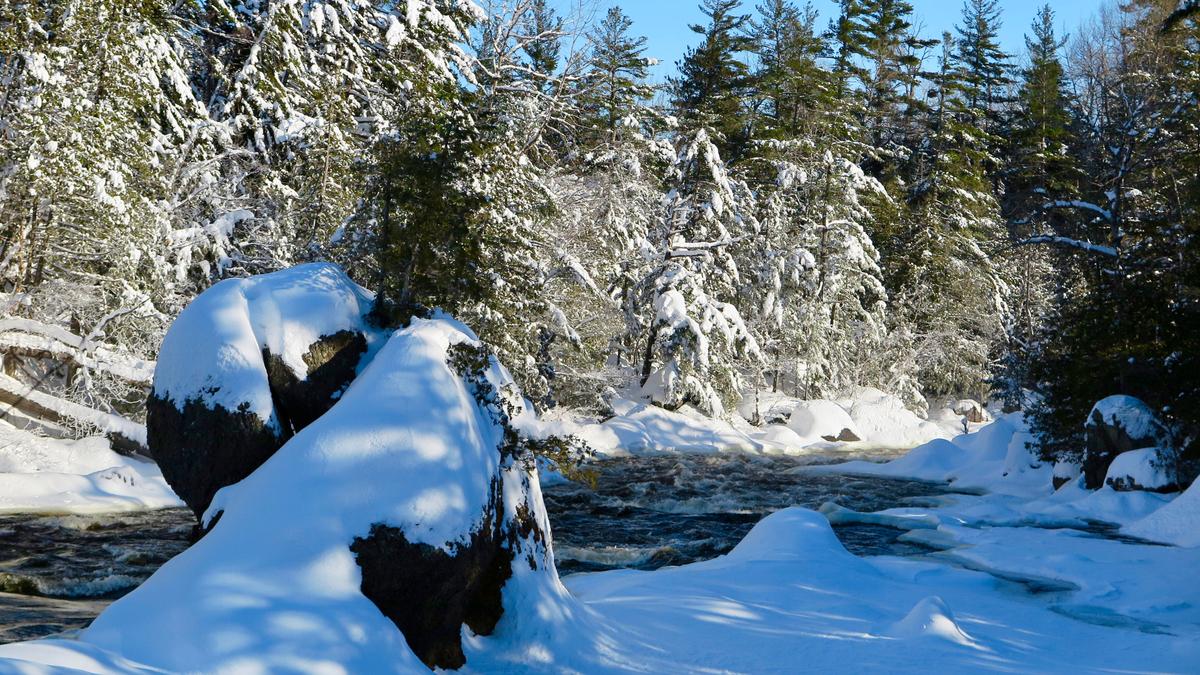 Eventually I hit my turnaround time, so I headed back to the hut to pick up my pack and make the ski back to the parking area. I was so glad I had made the effort to make the trip and get outdoors in spite of the frigid weather. I had discovered a wonderful new place to ski, had an extraordinary time, and created lasting memories! 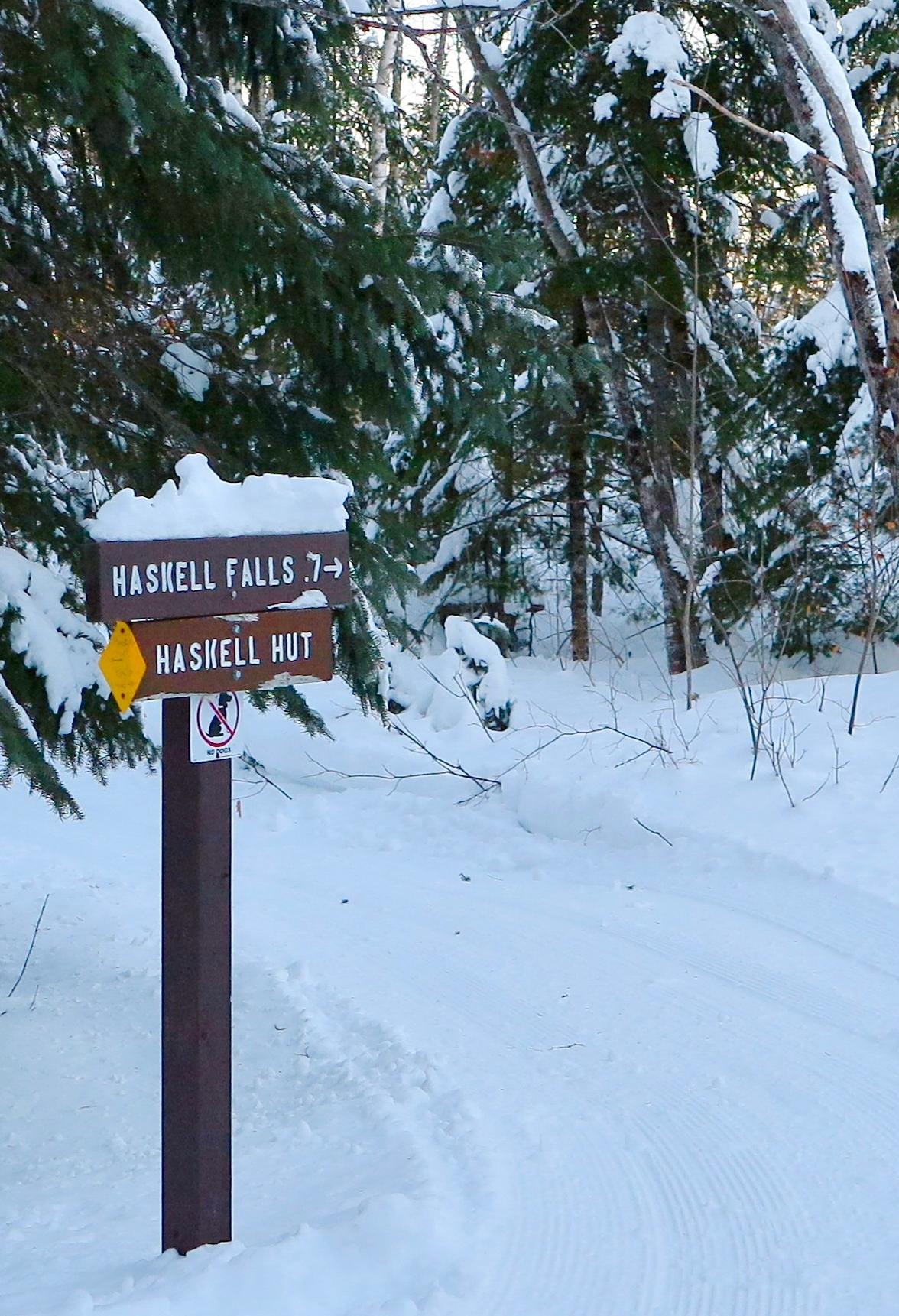 There are no park entrance fees nor charges for staying at the hut.

You must reserve your spot at the hut in advance, and obtain an overnight parking pass, by contacting the Elliotsville Foundation Recreation Manager at lunksoos@gmail.com or (207) 852-1291.

Check out the Katahdin Woods and Waters postings on Maine Trail Finder for more information. If you need a paper map, it may be downloaded from the NPS Katahdin Woods & Waters website.