In the silence of the winter woods, surrounded by swirling snowflakes and the crisp air, it can feel as though you are all alone -- until you look and listen a little more closely. Flocks of birds chitter through the forest canopy and tracks on snow show the pathways and habits of winter wildlife. 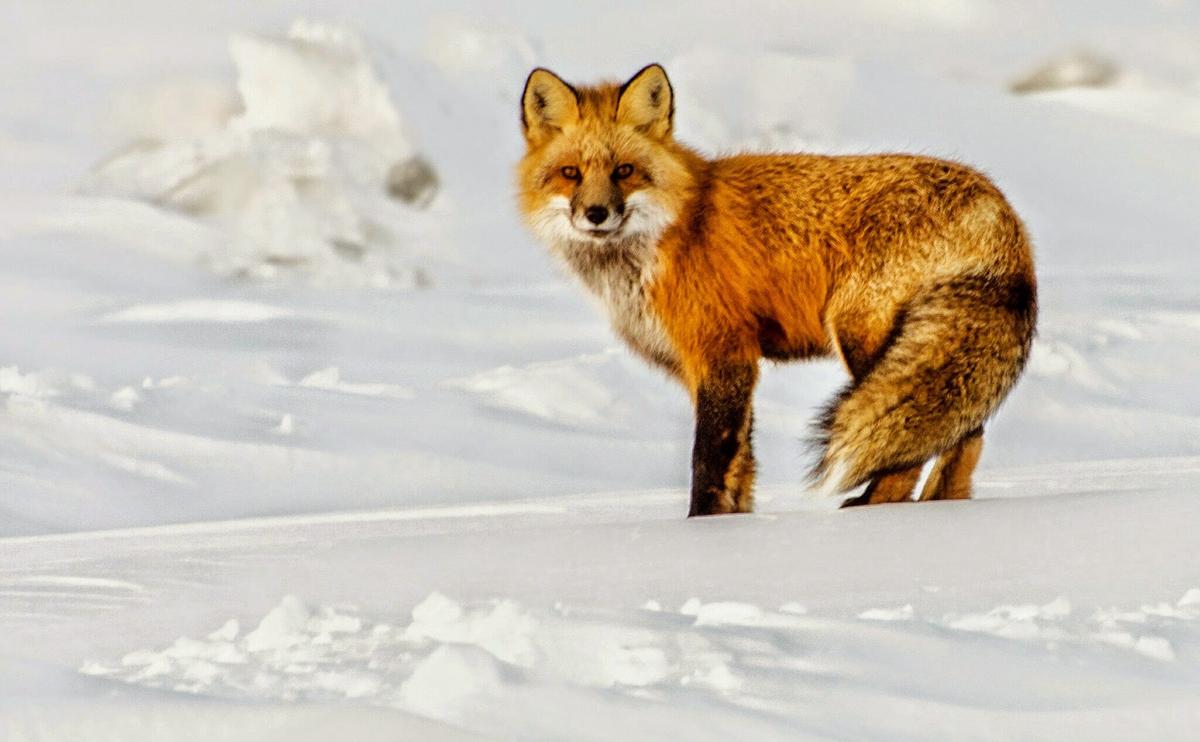 Winter is a great time to learn about the creatures that make their homes in Maine’s forests. Here are a few tips for getting to know your woodland neighbors a bit better.

Many of the birds that nest in Maine in the summer make their way to the Gulf Coast and Caribbean come fall, but there are a few hardy species that stay through the winter, and a few more than migrate here from more northern climes. Winter is a great time to practice your birding skills because there aren’t nearly as many species to learn and it is easier to see birds in the trees without leaves.

A lot of Maine's winter birds group up in multi-species flocks so you can see a bunch of them at once! There are many reasons birds flock up in the winter -- more individuals mean better chances of finding food and alerting the group of predators. Some species will even huddle together for warmth. 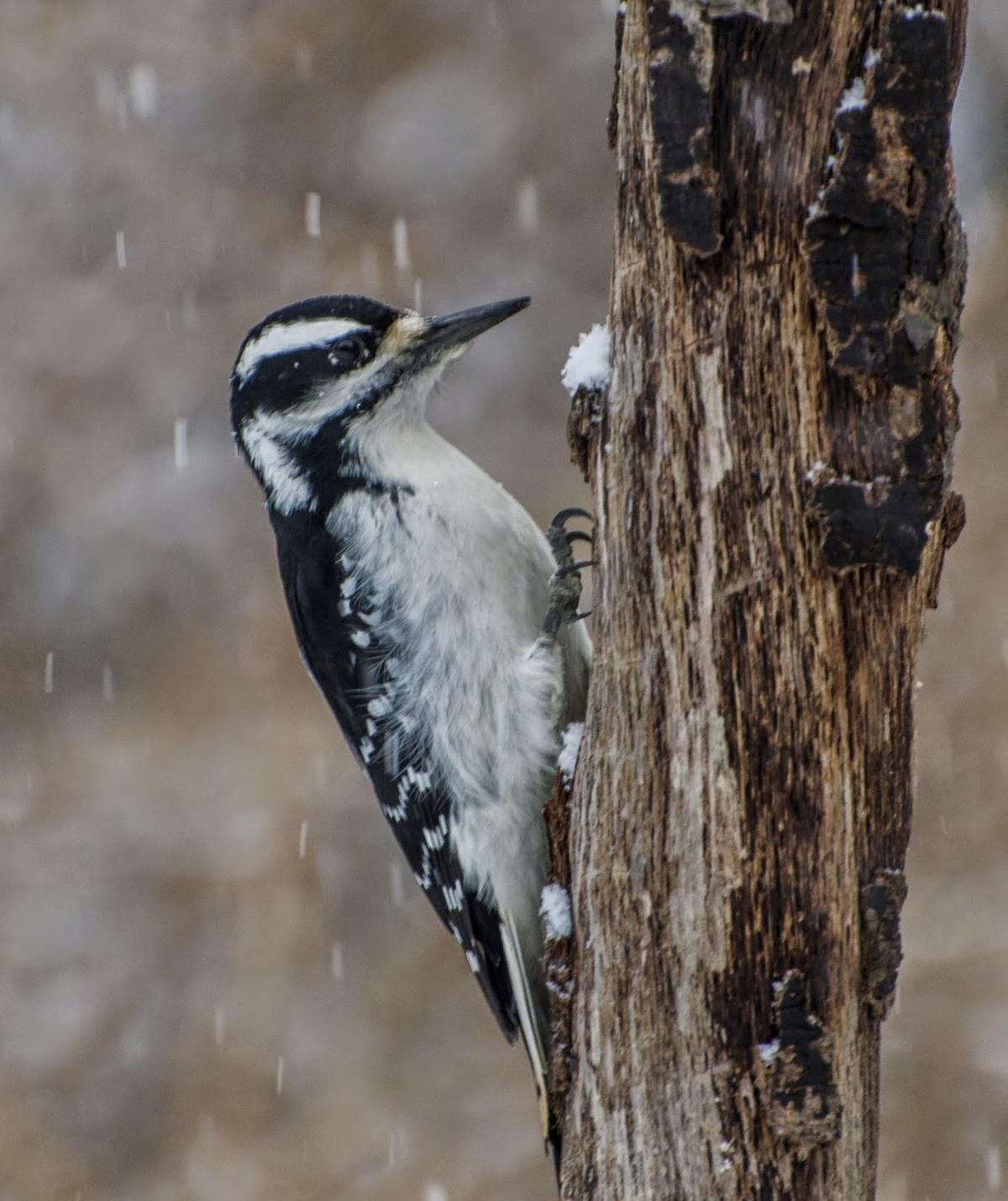 When looking for birds in the winter, think about food sources. Many species are seed-eaters and will look for trees that retain their seeds in winter, like spruce, fir or birch. There are also fruit-eaters that will look for berries remaining on the trees, like mountain ash, especially in early winter. 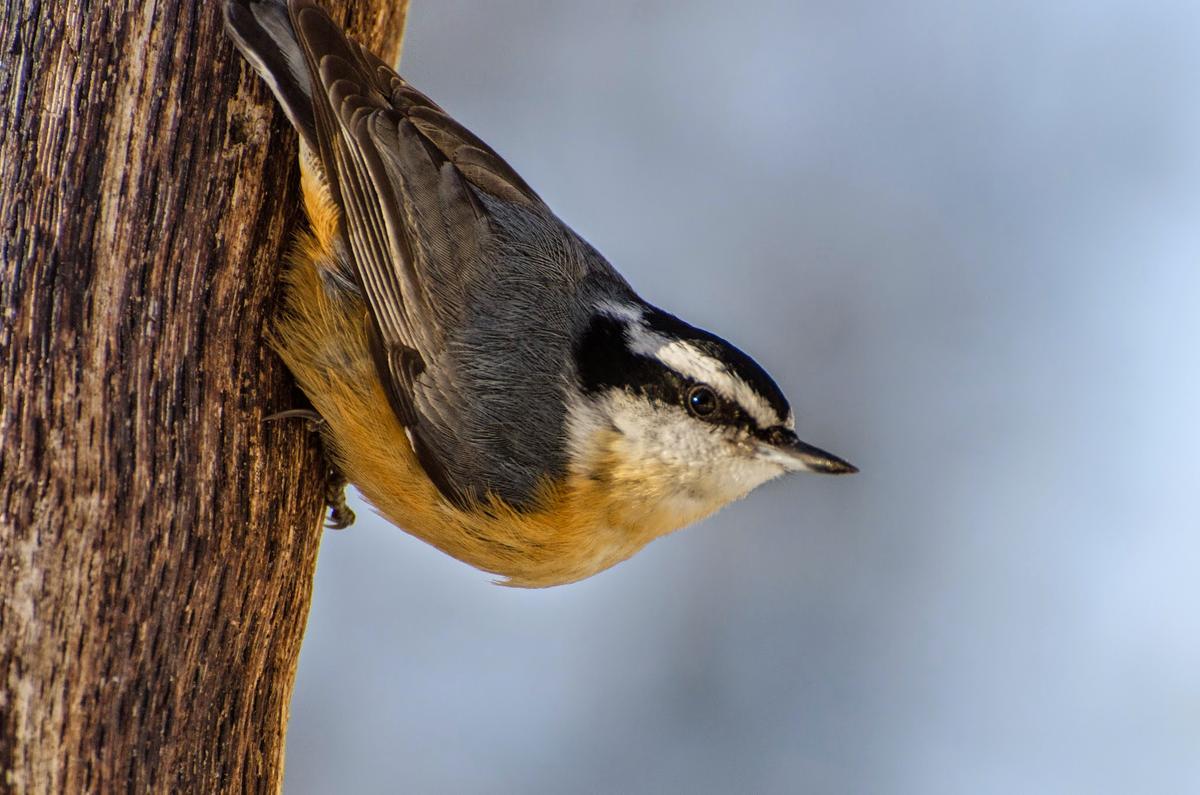 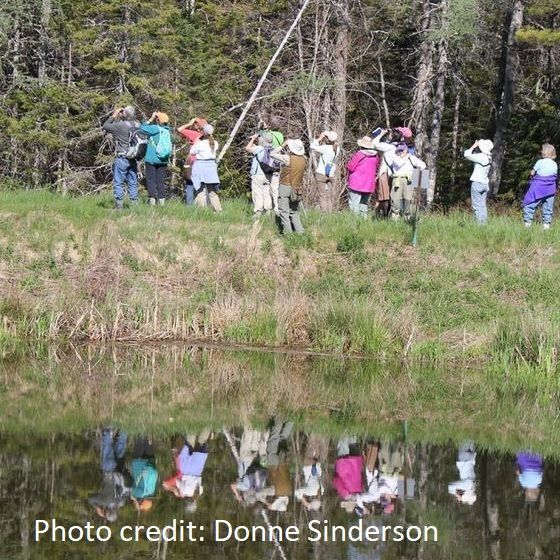 With over 60 species of birds recorded in the property, Kittredge Brook Forest is a great place to get out to see Maine's winter winged wildlife. The trails go through a variety of habitats and are surrounded by 2,000 acres of protected lands, which make them ideal for spotting birds of many species. 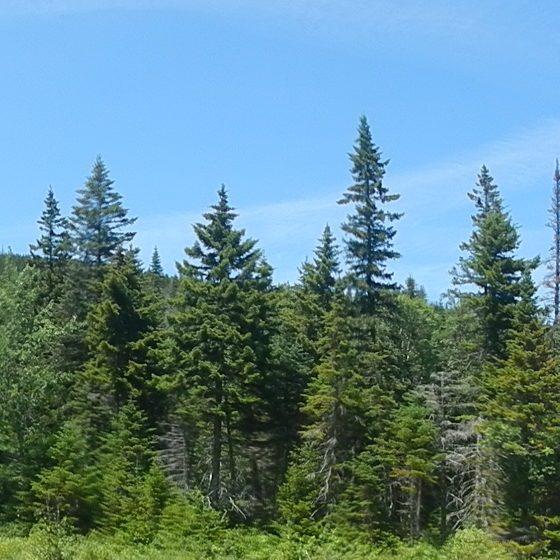 If you're looking for a big winter adventure through a variety of mountain habitats, climbing North and South Crocker is a good bet. Follow the Appalachian Trail up the ridge for a chance to see some of Maine's northern bird species, like Spruce Grouse and Gray Jays as well flocks of songbirds. Pay particular attention around the groves of heart-leaved paper birch and mountain ash.

During the spring, summer and fall, it is hard to tell where wildlife travels through the forest, but in winter, snow provides a great record of wildlife activity. Tracks on snow show where and how animals moved through the forest, at least since the last snowfall! But how can you tell which animal went where? 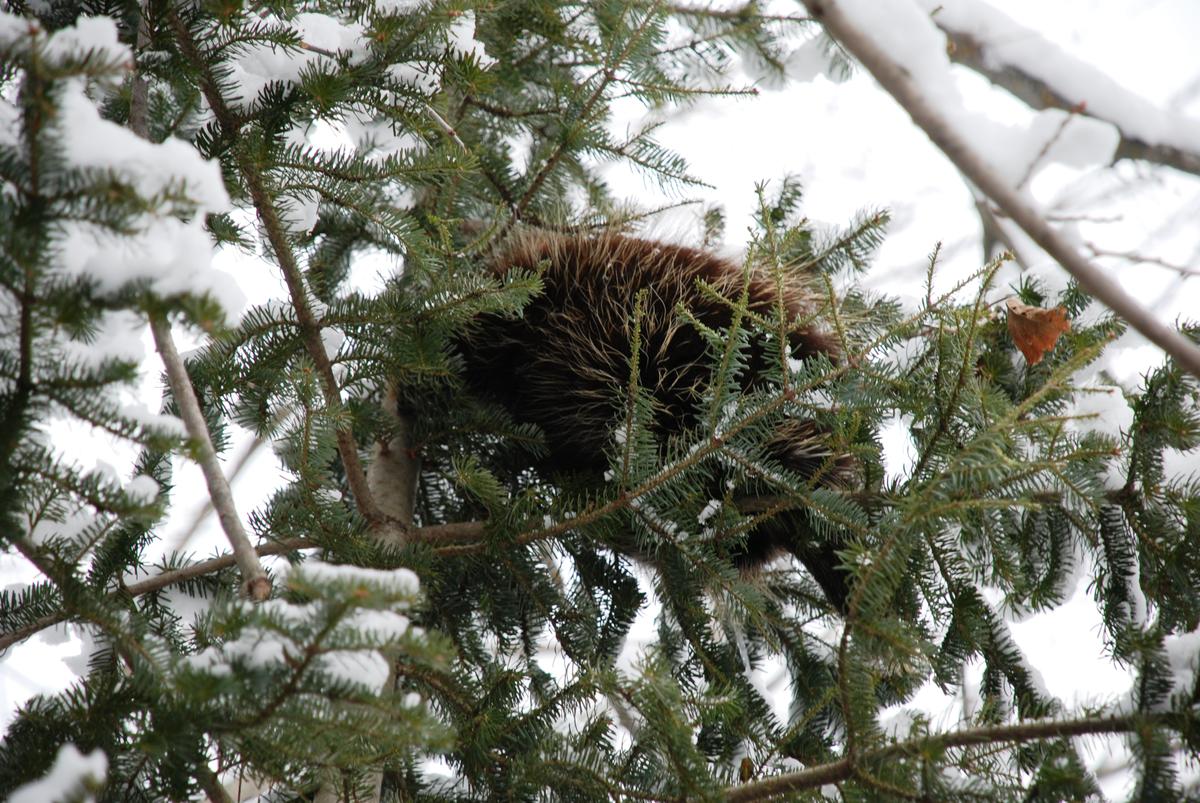 Sometimes its hard to tell where the animal starts and the tree ends! Photo credit: Jean Polfus

How deep are the tracks?

It stands to reason that the deeper the tracks, the larger the animal. Some mammals, like deer and moose, will almost always leave deep hoofprints, while smaller animals like foxes and weasels can stay on top of the snowpack much more easily. Animals that are particularly adapted to winter, like Canada lynx, have exceptionally large feet for their weight so they stay on top of the snow most of the time.

How many toe prints?

Another great way to narrow down which animal left the tracks is to count the toe prints. Hoofed mammals have two, members of the dog and cat families have four, and members of the weasel family, as well as skunks and raccoons, have five. Rodents get a little more confusing so it is always a good idea to bring a handy track guide with you for the smaller critters! 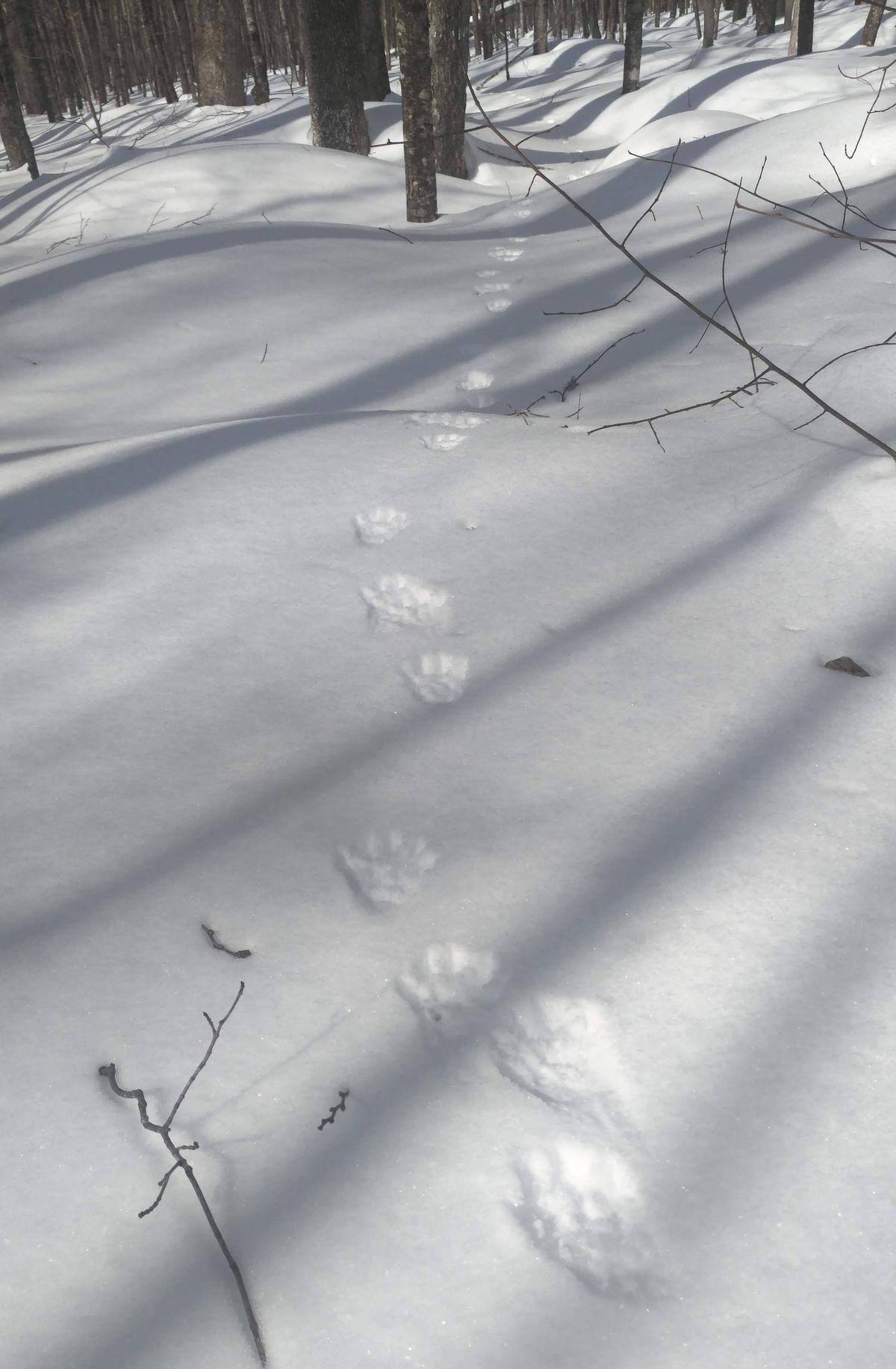 Fisher tracks through the snow.

As you get to know your tracks, you will notice that tracks follow patterns. The way the tracks are laid on the snow shows whether an animal is walking, trotting, bounding or running. Most animals use three or four of these gaits to move through the forest, but often, especially in winter, they use one more than the others. Animals like deer, and porcupines for that matter, will often walk and use the same paths multiple times in winter. Foxes often trot - you will see their tracks in an almost straight line because their rear feet strike the ground in the same place their front feet! Rodents and rabbits bring their hind legs in front of their front legs as they bound through the snow, and weasels range from big bounds to lopes, depending on their size. 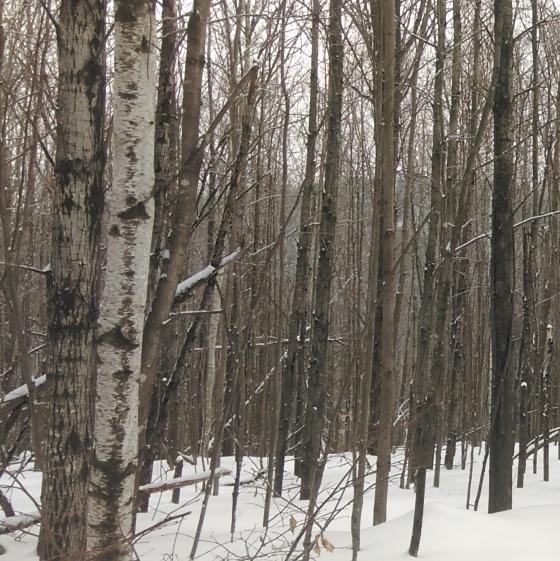 The ski trails at Mt. Blue State Park take you on big loops through Maine's woods with many chances to intersect the paths of animals. When you cross a bridge, take the chance to look for tracks along the creek below. Wildlife use creeks as travel corridors in the winter and there are many species that look for food in the water and along the edges. 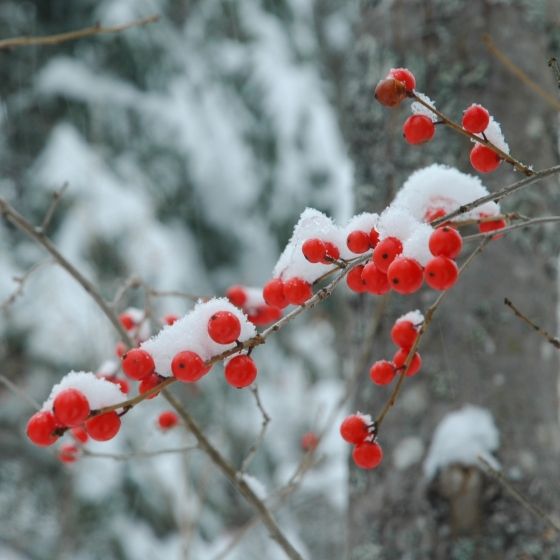 The Bangor City Forest trails are a great way to see signs of wildlife a little closer to home. The 600+ acres of forest provide habitat for many different species of wildlife. Keep an eye out when one forest type turns to another. Many species use these "edges" to forage or to move around.

When you see an animal, remember to keep your distance. Many Maine animals are working hard to find enough food to make it through the winter and you don’t want to force them to expend extra calories by running away from you. If you notice the animal changing its behavior because you are there, you are probably too close! Never ever chase an animal through the woods, and consider a new route if the animal is blocking your way. If you see an animal moving through the woods or across the trail, remember how lucky you are to get to share the woods with wildlife and have patience while they figure out where they want to go next. 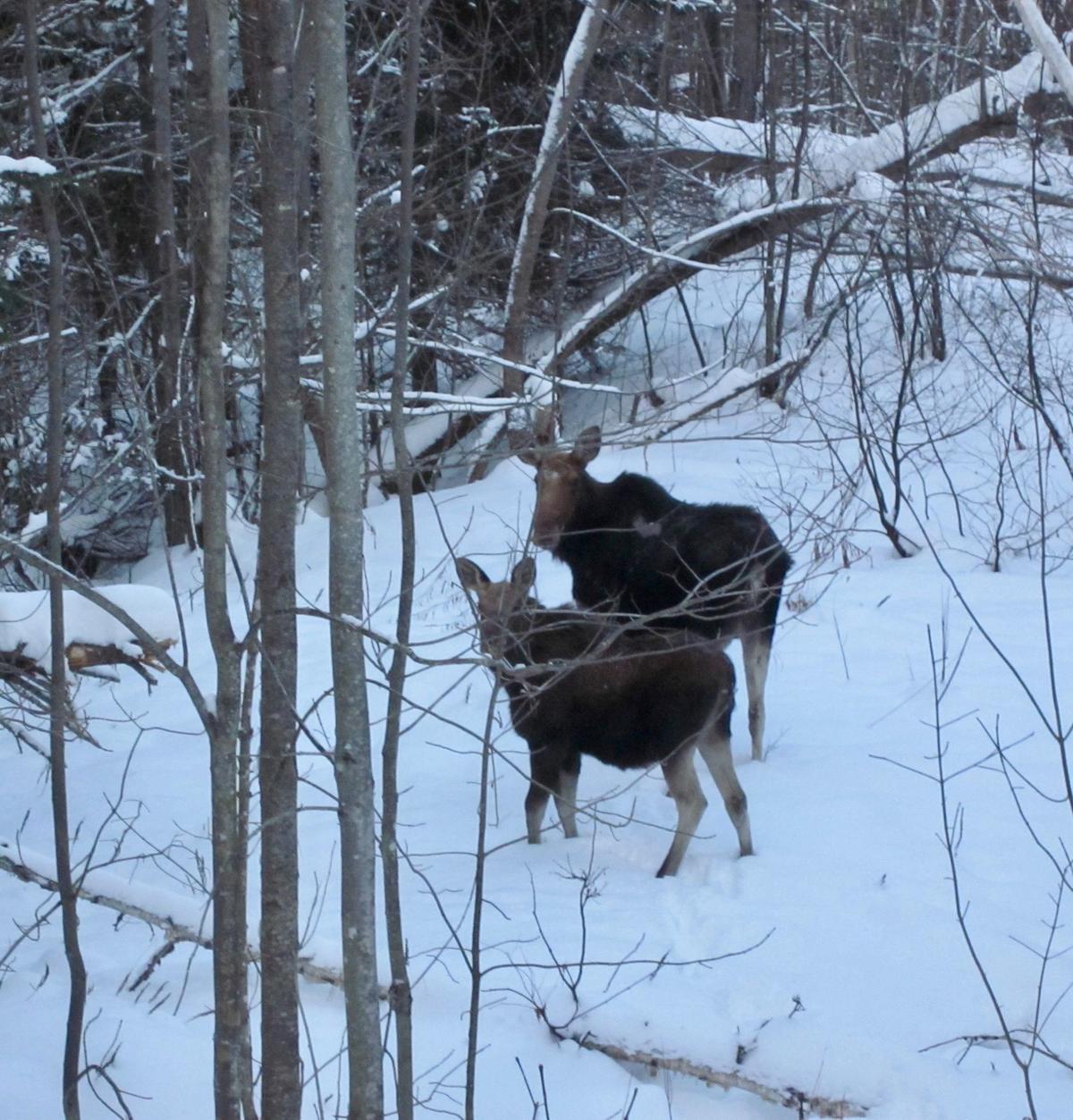 Tell us about your best winter wildlife sightings below!

Recent Articles
From Sea to Rivers: It's Alewife Migration Time!
Enock's Adventures: Cross Country Skiing
Enock's Adventures: Back Cove Trail
Enock's Adventures: Kennebec River Rail Trail
Search Stories
Comments (1)
Please Log In or Create Account to add comments.
powski
Amazing photos and great tips, thanks!
PRINT STORY
SHARE THIS STORY
Join In on the Fun!
Log in or create an account below to unlock all the great features of Maine trail finder: keep track of trails you want to do, preserve memories of trails you’ve done, earn badges, and more!
Your log in attempt was not successful. Please try again.
Don't yet have an account?
Create Account
There was an issue with your submission. Please try again.
* Indicates required field
Already have an account? Login here
Enter your username, and we will send you a new, randomly generated password to your email account.
There was an issue with your submission. Please try again.
Login here